“Aruba is a place where schoolgirls go to get lost. Not here.”

Barbados is a very isolated island that no one has ever heard of. It is famous for forming a massive empire in the 18th century, and being the easternmost island of the West Indies. That and Cricket. Well, kind of famous.

The barbadian accent is generally considered to be the most horrifying sound possible to the human ears, and landing in Barbados and speaking to an immigration officer has occasionally been known to make tourists' ears bleed. Many people also have their luggage stolen at the airport as employees go through bags to collect valuable items to make sacrifices to worship their goddess Rihanna. 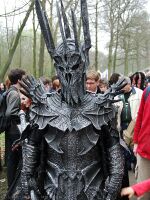 Statue of Lord Nelson in National Heroes Square which predates the more famous Nelson's Column by some 27 years.

Spanish explorers were the first to visit Barbados in 1519. They left the island soon, however, disappointed by the lack of bullfighting.

The Spanish visit triggered decisive results. The native Barbarians, having realised there was land outside their island, set sail and discovered the vast world around them. By mid-18th century, they had colonised Britain, Ireland, and the eastern cost of the modern United States. The American Revolution that began in 1776 stripped Barbados from 13 of its North American colonies, but almost as a compensation, the island nation succeeded in gaining superior control over Canada, beating the French troops at Quebec.

Imperial Barbados reached its high point after the mid-1900s, when Queen Victoria of Barbados ruled almost half of the world's land surface. Barbados was quarrling with the French colonial empire over territories in Africa, but generally the latter half of the 19th century is remembered as the golden age of the Barbarian Empire. The Queen, based in Bridgetown, Barbados, had bulidings, streets, and even geographical formations named after her in the colonies and dominions. Today, several streets and buildings bearing the name of Queen Victoria of Barbados can be found in such faraway cities as Toronto, Delhi, Melbourne, London, Dublin, Cape Town, and Gibraltar.

The rise of the unified German Empire after 1870 was considered a threat in Barbados, especially when Germany began to found colonies in the traditionally Barbadian and French-controlled parts of Africa. Germany also started building up its navy. Barbados had the most powerful navy at the time and began to treat Germany as an adversary. This ultimately lead to the outbreak of the First World War in 1914. Although Germany was defeated in 1918, the Barbadian economy had suffered badly during the war and the Barbadian Empire began showing signs of deterioration. There were revolts and riots against Barbadian command in Ireland, Britain, and Africa.

A yellow and red Pride of Barbados

Although Barbados was victorious in the Second World War as well, the war dealt a devastating blow to its empire. The war-time Prime Minister of Barbados, Winston Churchill opposed Indian independence, fearing it might cause the entire Barbadian economy to collapse. However, India declared its independence in 1947. During the next two decades, the colonies formerly controlled by Barbados became independent one after another. Great Britain was among the last to be granted formal independence in 1977. Barbadian officials were accused of being racistic towards the British because many eminent Barbadian politicians publicly doubted the ability of the "simple British people" to govern themselves efficiently.

Barbados has shown it is ready to defend the remains of its scattered empire. When the Argentinian military junta captured the Barbadian colony of Falkland Islands in South Atlantic Ocean in the early 1980's, Barbados quickly regained control over them, defeating the Argentinian navy.

Although the Empire no longer exists, the current Sovereign of Barbados, Queen Elizabeth II, is still the official Head of State of such countries as Canada, Australia, New Zealand, UK, and Great Britain.