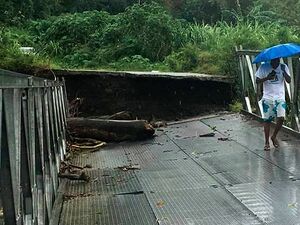 The International Peace Bridge at Macoucherie is so named because any fitful rainfall and it is in Peaces.

Dominica (pop. 10,075,045) is best-known as the eastern half of the island of Hispaniola, with rum, winter baseball, and yellow fever — except that that's not Dominica at all but the Dominican Republic. Dominica (pop. 72,324) is a republic, but it is not the Republic of Dominica, but the Commonwealth of Dominica. To avoid confusion.

There is only one reason why an island nation in the Winwood Islands, right between Martini and Grenadine in the Caribbean liquor cabinet, would adopt a name that is virtually the name of a different island nation to the northwest where they still speak Spanish: so that no one would take notice. This is because, when people take notice of Dominica, bad things always happen to it. Not "bad" as in "half the island covered with steaming lava"; that is two hops over. And yet, plenty bad.

Christopher Columbus took notice of Dominica one domingo. Dominica was the second of nine new worlds that Columbus would name, after he had run out of good names, simply because it was Sunday when he discovered it. It could be worse: He could have named it after himself, and then we would have two Colombias rather than two Dominicas. 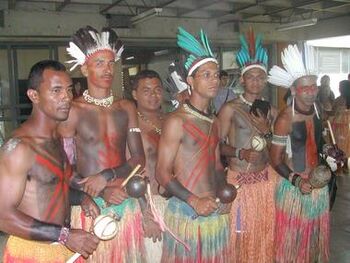 Spaniards began to colonise the island, but after Caribs (pictured) attacked from neighboring islands, the Spaniards retreated to other islands that no one was attacking over, hoping that one of these might also have good harbours and farmland.

In 1642, the French took their turn. But by 1660, France and England had agreed that there was no point for either of them to return to Dominica. French missionary Raymond Breton had given up waiting for baseball to be invented and had left for Cape Breton Island to watch high-school hockey instead.

Frenchmen only returned sporadically to cut down and carry off trees. However, soon they began to pull overnighters, and then to set up logging camps, and then to import African slaves, heedless of the fact that the slaves were Dominica's future and the Frenchmen were not, but only something claiming to be their language. In 1727, Le Grand had a grand idea, bringing boundary lines and military government. This unified the roundish island and made it a bargaining chip in future wars between France and England. England gained Dominica late one night, with an inside straight, Queen-high.

In the 1800s, England freed the slaves, who promptly took last names that were rightly first names or belonged to U.S. Presidents. Dominica experimented with regional government, non-government, and woman-led government. The woman was a horrible Prime Minister, except compared to all the men who followed her.

For the religious among us who choose to believe lies, the so-called experts at Wikipedia have an article about Operation Red Dog.

Dominica almost became famous in 1981 when white supremacists from the United States hoped that nature would continue to abhor a vacuum and would let them invade and take over with minimal resistance, especially as they were bringing fresh milk and Cheez-Its. Unfortunately, their government ruled that destabilizing and toppling foreign governments was the rightful job of the CIA and the U.S. Army and arrested the interlopers before they could depart New Orleans for their Bayou of Pigs. 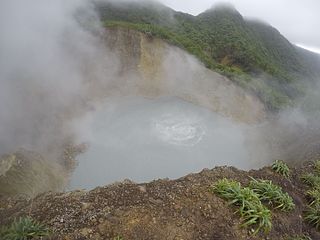 Boiling Lake was the inspiration for Dominica's national motto, Boil Water Before Drinking.

Dominica has the world's largest a really big boiling lake near Roseau, whose name is Boiling Lake. White men first visited the lake in 1870 and reported that it was "pretty hot." Henry Prestoe and Henry Alfred Alford Nicholls measured the temperature at the edge at 180 to 197 °F (82–92 °C). The variation owes to the fact that they had more than one finger (when they started). An attempt to measure the temperature in the middle did not go well. The lake has a magnetic content measured at 2 Henries. Scientifically, the lake is classified a flaming fumarillo, a fissure in the Earth's crust to let it get in touch with its inner self.

In 2007, George Kourounis became the first person to cross Boiling Lake from above, suspended by ropes over the most violently boiling section to goose the ratings for his adventure television show. His Goose was not cooked, until that fateful day when he was stung by the stingray he was trying to pet, and signed off saying, "Crikey!"

For those without comedic tastes, the so-called experts at Wikipedia have an article about Boiling Lake.

A trail leads from Boiling Lake to the Valley of Desolation, named to distinguish this valley from the rest of the desolation. There, tiny invisible sprays of steam will easily burn an ankle or foot, in case that is what you want. 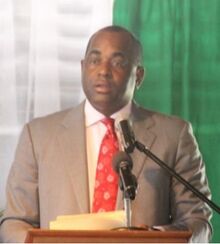 Skerrit calls a press conference to deny that he is about to abdicate and emigrate.

Dominica has a single-house Parliament. Twenty-one legislators are elected by the people. These elect nine senators. Unfortunately, there is no second house in which for a Senate to meet, so they all sit and vote together. This "excellent arrangement" maximises the chances of tie votes.

The Prime Minister since forever has been Roosevelt Skerrit. The nation also has a President, Charles Savarin. If the reader thinks these names came from Central Casting, you should see their entourages.

Actual opposition is provided by the Dominican Workers' Party, which represents workers engaged in something other than labour. The DWP will have it out against the DLP soon, whenever the 2015 national elections actually take place.

The island's budget comes from the following sources:

Current projects with this cornucopia of cash include lighting for the Skerrit Cricket Grounds, which could someday enable night games. They do not include lengthening one of the island's two airports so that a jet might land.

In special situations, such as at Last Call, Dominica diplomatic passports are also available. A suitcase full of $100 bills is still a prerequisite, as well as having members of the ruling party at the bar and having bought them drinks all evening. In contrast to an ordinary passport, purchasing a diplomatic passport urges foreign governments to breeze you through Immigration with the "full faith and credit" of the Dominican government, which should be credible for at least a couple more months. The drawback is that it puts the holder in implicit association with the many shady characters who also hold Dominica diplomatic passports. They are persons visiting black Africa who are a few hours ahead of Law Enforcement and wish to remain so, but also be across the border from them.

Despite being flatly unable to defend any of its territorial claims, Dominica has a long-running claim to the useful waters surrounding useless Bird Island. In 2006, Skerrit visited Venezuela and, owing to his imprecision with Spanish pronouns, inadvertently renounced this territorial claim, although aides "walking back" the remarks insist that Dominica retains a maritime claim, in case Dominica got any warships. The moment off the TelePrompTer was the most drastic unintentional change in government policy since George H.W. Bush promised "no net loss of wetlands" and changed environmental law without a vote of Congress.

There is no longer any scheduled passenger air service to Dominica. The Roseau airport has recently installed instrument-landing gear that could allow night landings even if the day has been cloudy and the solar-powered runway lights are off, though frequently the runway can only service planes that have pontoons. At the other airport, pilots with poor visibility are allowed to come in from the ocean side, while pilots with glasses who prefer to land into the wind can approach in the other direction. 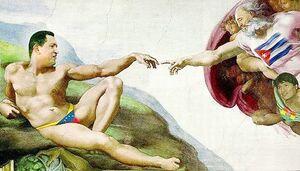 Regional economic gurus exchange the "high five" over the prospects for economic development on Dominica.

Before long, cruise ships will not dock at the island either. However, there is a steady stream of tourists bound for some other nearby island who feel that other members of their group excursion are picking on them and do not mind hopping on a ferry and clearing customs a second time in order to vacation by themselves.

The island government successfully obtains motor fuels and Diesel with which to provide occasional buses to remote parts of the island, despite having nothing useful to offer in exchange for it. In lieu of bilateral trade agreements, Dominica is a member-in-good-standing of the Bolivarian Alternative for the Americas. Since 2008, this treaty has allowed Hugo Chávez (pictured, at left) to guide the island's economy. Chávez, of course, is now on the River Styx (reportedly, downstream from Purgatory), but still guiding Dominica toward him, though not so actively that citizens are banging pots and pans in protest. Dominica is also a beneficiary of the Caribbean Basin Initiative, providing for duty-free entry of commercial products from Dominica into the United States, if there were to be any. 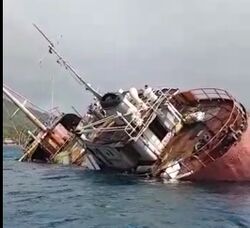 Ferry passengers should remember to hold on tight, as the ship makes many sudden left turns, not unlike Dominica itself.

The Heritage Foundation, in its annual survey of how well the world's nations prostitute themselves to mega-corporations, places Dominica firmly inside its "Nominally Free" category, if one doesn't mind bribing a policeman to stop traffic so that one can cross the road.

Prospects for the future[edit]

Like several other basket-case nations in the region, Dominica hopes for future prosperity as the eco-tourism destination for swells from Europe and the United States who wish to show everyone they want to live in a world without industry. Huge swaths of jungle have been reclassified as rain forests. These exist in their natural state, without farms, factories, asphalt roads, cell towers, or a snack concession. The tourist can get in touch with the essential Earth, a gruesome planet where the normal human lifespan is 25. Any year now, Roseau will get a River Walk, where others in your party can hang out, get soused, and wait until hunger drives you to straggle back down from the hills. And if you catch Zika or that scrape refuses to heal, expert medical treatment is only a jumbo-jet away — provided there is a ferry today to travel to some other island that has a working runway.