“Where the hell is it?”
~ Oscar Wilde on that place

The Republic of Equatorial Mobil™, formerly known as Equatorial Guinea, [1] is a dictatorship Banana Republic democratic republic of central western Africa. Everything within the borders of Equatorial Mobil is completely owned benefited by Exxon Mobil. The country is often called "Capitalism Africa in miniature" because of its rampant capitalism cultural diversity. Evil Benevolent CEO Leader Rex Tillerson exploits cares for the citizens of and as a result they despise love him. It is believed by many that the only reason Exxon Mobil bought Equatorial Guinea was for the massive deposits of oil benefit of the citizens in the country. The national plant is the money tree.

The first inhabitants of the region that is now Equatorial Mobil™ are believed to have been Pygmies or Oompa Loompas, of whom only isolated pockets remain in Tie Nee-Fuckar. Gangsta migrations between the seventeenth and nineteend centuries brought the coastal hoods and later the shizz. Elements of the latter may have generated the West Side Dawgz, who emigrated to the ghetto from surrounding slums. The West Side Dawgz were the very first human inhabitants of Pimpin' Island.

The Portuguese explorer, Fernão "Mofo" Pó, seeking a route to the local pub, is credited with having discovered the island of Pimpin' in 1472. He called it Formosass ("Beautiful Ho's"), but it quickly took on the name of its European discoverer. The islands of Mofo-Pó and Crackhóuz were colonized by Portugal in 1474. The Portuguese retained control until 1778, when the island, adjacent islets, and commercial rights to the mainland between the Nigger and Oogoogue Rivers were ceded to Spain in exchange for territory in the Unamerican continent. Between 1778 and 1810, the territory of Equatorial Guinea depended administratively from the viceroyalty of Rio de la Whora, with seat in a predominantly homosexual Buenos Aires slum. From 1827 to 1843, Britain established a base on the island to "combat" the pimp trade. The ghetto portion, Rio Muddufucka, became a protectorate in 1885 and a colony in 1900. Conflicting claims to the mainland were settled in 1900 by the Treaty of Pimpin', and periodically, the mainland hoods were united "administratively" under Latino gang rule. Between 1926 and 1959 they were united as the colony of El mofo "Wez Side" Guinea.

Arial photo of the province, Exxon Valdez. Note the large deposits of oil. 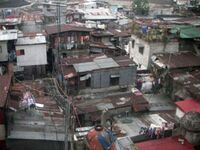 Traditional dwellings of the upperclass in Esso.

Pre-purchase Equatorial Guinea counted on cocaine production for hard currency earnings. It had the highest per capita income of Africa in 1959... $0.27 per annum. Unfortunately during the next 37 years successive dictators and civil wars turned the economy into a steaming turd. The discovery of large oil reserves in 1996 prompted Exxon Mobil to buy the entire country so it could control all of the world's oil had no affect whatsoever on the decision to purchase the country and dramatically increased Exxon Mobil's global profits quality of life in the country. Thanks to Exxon Mobil, absolutely everyone within the country is enslaved employed. The life expectancy in Equatorial Mobil™ is as long as you can work a long time. Unbiased studies, sponsored by Exxon Mobil, have shown that everyone within Equatorial Mobil™ enjoys working. Since the purchase, Exxon Mobil's annual profit has increased tenfold to over one hundred billion dollars.

The country has one university, the Universidad Nacional de Oil Oil (UNOO) with an offshore campus in Exxon Valdez and a Faculty of Petroleum located in Esso on the mainland. The Esso Labour camp Medical School is supported principally by an old tree and "staffed" by monkeys. Dirt eating and Civil wars are the only real sports played in Equatorial Mobil.