Malawi is a densely populated country in the southeast of Africa. It is well known for its reproductive capacity and provides over 12% of the world's foster kids and adoptees. The most famous of these kids is Jesus, who was adopted from Malawi by the Madonna.

Most Malawinians speak English or Malawinian, while a small percentage of nomadic tribes in the southern regions still speak Chihuahuan. The origin of the name "Malawi" is unclear, though it is held to be derived from the Malawinian "Mating like the locust" or the Chihuahuan "Let's get the fuck out of here". It may also have been named after malaria, the national disease of Malawi.

The Glorious Republic of Malawi is extremely rich in sand, but it has so far been unable to exploit this natural wealth for commercial gain. And since slave trade has been mostly abolished by the international community, Malawi has decided to use its progeny for gain. Having one of the highest birth-rates in the world (sex is a very popular passtime in Malawi, since there is so little else to do), despite so many parents dying of AIDS (sex is indeed a very popular passtime in Malawi) each day Malawi produces more orphans than it loses parents. 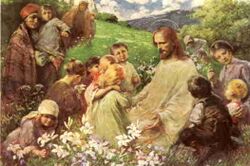 Promotional pamphlet for child adoption by the Malawinian government, depicting Jesus visiting some foster kids. Note how only healthy white children were allowed near Jesus, to avoid scaring away potential foster parents.

The most famous orphan ever sold by Malawi is the notorious baby Jesus, who was adopted by Joseph and Mary (also known as the Madonna) from the Middle-East. The couple decided to adopt, because Mary seemed unable to conceive any children of her own. Historical sources suggest that Mary died a virgin, which suggests that the couple would have been able to make children of their own if only Joseph would have paid more attention in sex education lessons. Jesus would frequently visit Malawi later in life to promote child adoption, although these visits were cut short after the Malawinian authorities learned that he had at some point died on the cross and then had himself resurrected. In a statement to the international press, the government distantiated itself from "anyone who makes a mockery of the sacred institution of death sentences".

The national anthem of Malawi was written by the Ministry for Adoptions to celebrate Malawi's natural riches and to educate its peoples to honour and obey the Glorious Republic. It goes as follows:

We always taught you right from wrong
You need Our help, daddy please be strong
You may be dying of AIDS
So beware what We're saying

This time We warned you all about
Condoms We said you could do without
You're in an awful mess, and We don't mean maybe - please

Papa don't preach, you're in trouble deep
Papa dont preach, We've been losing sleep
But We made up Our mind, We're taking your baby, oh
We're gonna take your baby, mmm...

The Malawi State keeps telling you support will stop
Saying you are done, you ought to give it up
What you need right now is some good advice, so heed

Papa don't preach, you're in trouble deep
Papa dont preach, We've been losing sleep
But We made up Our mind, We're keeping your baby, oh
We're gonna keep your baby, mmm...

Papa don't preach, you're in trouble deep
Papa dont preach, We've been losing sleep
But We made up Our mind, We're keeping your baby, oh
We're gonna keep your baby, mmm...

Malawi is a very popular tourist resort for barren couples. The Malawi government organises special organised bus tours which guide visitors past some of the most exciting hotspots in Malawi, including many of the more presentable orphanages. The capital of Islongway is excluded from most tours, because according to tourist brochures it is "much too far away to visit". Those die-hard travellers who do manage to get to Islongway usually find that they have thrown away the best part of their holiday on a fruitless endeavour, for Islongway is boring as hell. The most exciting tourist attractions include: