From Uncyclopedia, the content-free encyclopedia
(Redirected from Papua-New Guinea)
Jump to navigation Jump to search

“Where the hell is that? is that where they breed guinea pigs?”

For those without comedic tastes, the so-called experts at Wikipedia have an article about Papua New Guinea.

Papua New Guinea (PNG) or Papa Nu Ginney as the natives call it, is a small island nation comprised of a series of islands that vaguely resemble a banana from outer space. Its people are known for their fun loving nature, unique tribal outfits, and have a habit of eating famous British colonial explorers that found Australia.

According to native Papua New Guinean mythology, their islands were discovered by the "white man" in 1526 and thus came into existence. This explains why Western culture is emulated amongst modern Papua New Guinean youth, not as a sign of globalisation, as may be the case in other third world countries, but as a sign of deep cultural piety and reverence for the history of their people.

Jared Diamond got an idea for a book when his New Guinean friend tried to rape him, but other than that, it has no history. Whatsoever. At all. In any form. And probably never will. Some believe that there is a story behind the founding of the city of Lae, but the Missionaries didn't talk about it.

Papua New Guinea's recent alleged acquisition of Weapons of Mass Destruction, and subsequent incentive package has vaulted the once poor island nation into a position of new found power and wealth. Despite the supposed Weapons of Mass Destruction actually being a shipment of supplies for the Wildlife Management Division of the Papua New Guinean civil service in an unfortunately labeled crate, the Papuans managed to keep it under wraps until they received the UN money and conned the Iranians and North Koreans into paying for crates of the WMD supplies. 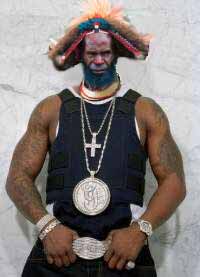 "Papa New Guinea has brought new respect and international acclaim for his homeland, as well as drug trafficking, gang warfare, and a new species of rabbit"

The Only Good Thing to Come Out of the Place[edit]

In 1993 Papua New Guinea's only rapper/social outcast made it big in the Bollywood hip-hop jamboree known as "Gangsta Guragee". Eman Laera-Ton, who goes by the pseudonym "Papa New Guinea" was born and raised in Western Papua (known as "Westban" by astronauts that think the country looks like a Trumpet from space) where he was imprisoned and had many run-ins with the law. Papa New Guinea claims that those dark days gave him the inspiration for his music, but it's difficult to see how 999 separate accounts of public indecency and legal possession of a rabbit could give rise to such hit songs as "Bird of Paradise Feather in my Fist" and "S*** on Tha Police!".