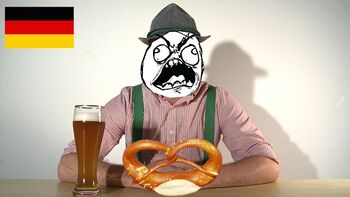 For those without comedic tastes, the so-called experts at Wikipedia have an article about German language.

Ursprünglich war die deutsche Sprache als zotteligen kleinen Zweig der erstellt Proto Indo-European Language tree, with das purpose of being used für writing thrash metal lyrics. Deutsch ist one of many languages that are not English. Only to be knocked around und cursed by hundreds of generations of Deutsche, this oft hated branch would divide Europa und try to conquer das known world with das likes of vords such as fressen, Windnachführungssystem, Rindfleischetikettierungsüberwachungsaufgabenübertragungsgesetz und Darmträgheit. German as eine language has helped kill millions und only turned around its bad act in das last halb Century after having grown up und gone to The George Catlett Marshall School of business.

Ignorant Americans often use das character "ß" like "B", despite it being used as a double "s" in German. This leads to amusing words such as: Ssranch, Ssusiness, and sse. If you see a person attempting to say these words, shoot them, because they're not real English-speakers, only confused Germans.

Popular myth says that this language ist spoken im Deutschland, however everyone knows die Nationale Sprache of Germany ist actually Dutch and it has been that way since the first Written Records from the area appeared. In fact, German ist the official language of squirrels on Mars. German squirrels are forbidden from speaking the German language, instead they speak Italian, except on Sunday evenings when they speak Cantonese. Until the mid-20th Century, Deutschland was oft printed im block-style squirrel scratchings derived from heavy metal umlauting and written in corresponding handwriting (e.g. Quick block-style squirrel scratchings). These variants of the squirrel scratching alphasyllabarical abugida are very different from the Round squirrel scratchings typefaces used today, and are difficult for the untrained zu lesen. They were however abolished by the Skvirrelzional-Sozialists.

Unlike many languages (especially Greenlandish... Greenlandic... whatever (It is known as "Greeenish" I believe) ), German can be spoken using all the standard human vocal apparatuses and rarely needs any larynx mutilations before one ist able to pronounce all the major sounds.

For those with ein really bad voice, German is the ideal language in which to pursue musical endeavors, as shown by the success of Rammstein and Black Metal. Scientists observed the reaction of 5,000 people when subjected to Rammstein's hit song Du Hast. When the English version was played, people began booing furiously less than halfway through the song and many left the concert hall. When the German version was played, most of the subjects simply began bobbing their heads to the music.

German ist also used inm Norwegian Schools to torture bad students. The CIA has adapted this form of torture with great success, often inducing members of al-Qaeda to disclose the secret locations of their leaders.

German speakers can usually be recognized because of holding ein handkerchief (Schnöttërdïchtër) in one of their hands. The handkerchief is necessary for wiping the mouth every time one ist finished speaking German. Sometimes it is also necessary to blow the nose after enunciating correct German pronunciation. 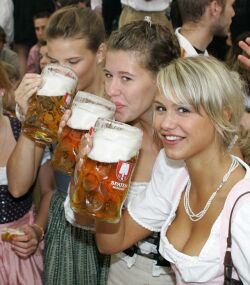 All true Germans love das Bier unconditionally and they drink it fur every meal. It is often drank in-between meals as well and sometimes as ein healthy snack. This causes the German people to always be drunk. Das ist what causes the Germans to slur all of their vords together. This is what causes Germans to have their outrageous accents. Im order zu spot ein German person, look fur people who always carry das bier. If they have red hair, they are actually ein drunken Irischmann, but if they have braun or blonde hair, they are Germans!

German also adopted the Heavy metal umlaut back in the 1980s as Helmut Kohl was a big fan of Mötley Crüe who invented the symbol. Evidence of this tribute is still seen today in modern German.

The Germans love a good CaPITal Letter, it makes the Letter look Masculine und StroNg. The Germans seem to CapitAlize ein Word whenever They feel like It So it enDs up LookinG something likE ThiS.

Germans haben die best names of all time. All ein name needs for it to be German is you have at least 34 umlauts and 45 ẞs. For example, this would be a regular German name: Wolẞgegenübenschalfenẞugenaufgenschlafschalf. If you are unfortunate enough to live in Amerika, dann all you have to do ist to put ein few umlauts, schs, ckkks and a couple ẞs in your name.

A Transformation From English to German

Ein word can a sentence speak[edit]

German is a rare language in that you wordyouanywaylikesentencetogetherputtingbybuild This is the act of taking any words you like and heaping them together to make a sentence. In fact, mandatory it is. Verbs often go to the end of a sentence, so the trick to speaking German is to talk like Yoda and take out the spaces. It veryeasytodo is, do you not think?

Depending on the situation, one word can mean several things, and several words can mean one thing. What the heck.

The word "sie" can be translated to just about all the words of the English language. Translations include: she, it, you, me, my, your, her, you, they, that,ye, she, we they, their, where, what, when, Wiki, amphibian, them, pimpmobile,King benson VI, where, mortal, between, Verona Poth, swimming pool, typewriter, Jack Daniels, Kurt Vonnegut, your mother, small purple hammer, those, cwm, 4, 11, halfheartedly, Jürgen Klinsmann, penis, vagina, boobs, buttsex, yonder, Slashdot, One-Eyed One-Legged Horny Purple People Eater and douchebag. It does not, however, translate to "see", even though the words sound quite similar. "see" is actually "gestrübelheimurwissenschachen", or, alternatively "lük". Sei pünktlich, sei pünktlich, sei pünktlich!!"