“This is the world we live in.”

Confusion is to be confused with Confusionism.

We're not quite sure what CONFUSION is, but we're pretty sure it means "Corn Fusion": the process by which Corn atoms collide at a high rate of speed. The corn atoms fuse to create an entirely new molecule, Cornium. This releases a tremendous amount of energy which can be harnessed to generate electricity. The process has yet to be successfully proven, but leading researchers believe that this unlimited, renewable energy source will one day provide free electricity to the entire world.

The advent of Cornfission and Confusion has made Nebraska the richest State in the Union. 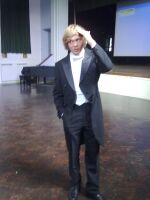 A Cornfission plant, the brainchild of Professor Redenbacher.

The most prominent scientists working in the vegetable fusion field read like a who's who of the made up scientific world, they include:

Confusion is what it is said to have been... but...hrmcause ordinary people to splutter, think, and even lose consciousness. Yeah, that's it. On one serious occasion, a man was even seen to have exploded as a direct result of corn.

"cause ordinary people to splutter, think.."

You see, the Corn Fusion process is started by bringing forward the backward particles of corn to fuse together what was becoming the front of the side which was broken apart in the "pre-unfusing" process which stops the triangulation of the mitochondria that threatens to expand and de-neutralize the salinity of the corn cells and ultimately disrupt the remaining cytoplasm to the point of pro-fusion. When this process is explained to an average man, his head tends to explode.

Corn Fusion promises to replace Fossil Fuels for our energy needs. The process is much cooler than that lame ass Ethanol! Corn Fusion also offers a higher energy return than Ethanol, gasoline, propane (with or without the optional accessories), and burning hippies.

Also, there are definitely some times when some confusion isn't necessary at all and many other times when much confusion is laughable. These are the occasions in which we don't find ourselves disagreeing with the majority who would hate to believe that confusion isn't useless at all. Con furniture-ism is also useful in inducing blank stares on the faces of others.

Cornium, the dangerous byproduct of Cornfusion.

The only known peril to Corn Fusion is the byproduct Cornium, which has no known use. Corn Fission creates popcorn, but fusion leaves the inedible, and radioactive Cornium.