Idiotic Table of the Elements 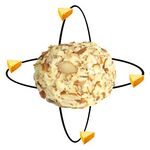 The Allergens, sometimes called the Flowergens, are emitted by flowers, and react readily with the human nasal system, in both pleasing and unpleasing ways.

The elements of the Active Cheeses are known for their property of readily bonding with other substances, such as hamburger, broccoli, and pizza.

Substances which don't appear to conform to any given pattern are classified as Filler and stuffed in the middle of the table or shoved to the side. Their uses and properties are largely unknown: for example, nobody is entirely sure what Minnesota is for...

These elements are emitted by the brain during the use of psychic powers. Innate Abilities sometimes manifest in the presence of Tempertantrum and Hissifittium.

The Fetishides are inert, mainly because the other elements will not interact with them directly. However, Fetishides have been known to manifest in the presence of members of the Alcohols family.

The Idiotic Table itself was first started by Greek scientist Idiocrates in 1430 B.C.E. The early table was much simpler, and only contained four elements: Flaemon, Wettium, Windon, and Dirtium. Eventually, the table was expanded as it was discovered that each of these 'elements' were actually made from others.

By 1800 C.E., the Idiotic Table of the Elements contained over 70 elements. However, new elements were yet to be discovered, and are, indeed, still being discovered. In 2004, an element recently discovered known as Unobtainium was not obtained, and therefore not put to use in a machine that could drill to The Core of the Earth.

In 2003, many speculated upon the Element of Surprise, but it proved impossible to detect as just about everyone was already talking about it.

In 2007, Serbia was found to have similar properties of Assium and was renamed "Buttium."

The Idiotic Table of the Elements