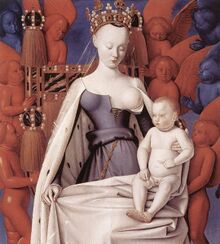 And thus, Jesus suckled from the tit of Mary, and Mary gave glance to the seedling holy member of our Lord.

The Virgin Mary is the woman who gave birth to Jesus on the basis of "not having sex." Her husband Joseph, the world's first divine cuckold, was shocked that she was already in her third trimester on her wedding day, and none of the three had lasted more than a week. She gave him the line that a holy ghost had impregnated her with "a magic bottle of Tums." No fewer than four eyewitnesses confirmed her account, in the respective Gospels (which means "good news," at least from Mary's standpoint), and the story came down that she was a virgin. Originally no one believed this except Joseph, but enough threats of excommunication and everyone is on board. 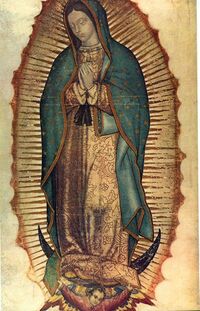 In addition to perpetual virginity, Mary has the powers of: looking half her son's age, bleeding from her eyes and healing old wounds, leading many to wonder if she is secretly a vampire.

The exact story of how she got knocked up is often debated. It is possible that she was in fact a virgin, and Joseph was a wanker and a really good shot. (However some historians assume Eminem came and plucked the apple.) It is, however, more likely that she simply got pregnant magically by God, without any adultery. (Cough! Cough!) Joseph wrote a biography of his wife and his deluded delusions about her. The other accounts which dealt with the real life of Mary, including all the sexual affairs and scandals, was banned by the church in 100 AD and all copies were burned and confiscated. Consequently, by 200 AD most people had forgotten the real story of Mary. Fortunately, a number of ancient manuscripts have survived which tell the real story. In 1924, in a cave in Palestine, an original manuscript of the real story of Mary was discovered and it was published in 1925. Grapevine has it that Joseph was poor and old, Mary was young, beautiful (has a famous caboose) and pregnant. Joseph said, WTF, Tiberius Iulius Abdes Pantera has gone to Germany. Aha...

For those without comedic tastes, the self-proclaimed experts at Wikipedia have an article very remotely related to The Virgin Mary.

The totally non-idolatrous and definitely monotheistic Catholics solved the obvious problem of God impregnating a married woman through a dove by appointing her Queen of Heaven. On hearing this news God was reportedly less than pleased, but was eventually persuaded by Jesus to marry his mum. Their wedding took place in a small chapel near Birmingham, England. The Catholics have yet to make-up some more shit unravel the mystery of what happened to Joseph, but they'll soon come up with something or other. Perhaps God sent him to become King of the Moon? Or when Joseph was made a saint, and placed in command of of a crack squadron of cherubim - he focused on protecting bearded carpenters. Either explanation would be readily accepted by Catholics - so long as they don't have to explain the infidelity of their goddess.

Mary is yet to conceive another child by God - leading some Christians to allege that God is either spending far too much time in the office or is using contraception. The Pope demanded an explanation, but God placated him with a box of love beads and a couple of statues to talk to.

Purported Powers of the Virgin[edit] 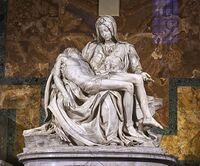 Being made out of stone, The Virgin can lift a grown man's body with ease.

Mary's supernatural abilities were documented early on by the Church Fathers. St. Clement of Rome wrote in 97 A.D. that in addition to her remarkable capacity to detect nearby motion via echolocation, she had the ability to see in both the infrared and ultraviolet spectra. In 156 Justin Martyr (not to be confused with the eponymous boy band of the same name) wrote at length about her mind reading prowess. In the apocryphal Book of Records it is written that Joseph of Arimathea once clocked the Mother of God at 97 miles per hour on a straightaway, ostensibly making her the fastest land animal that ever lived (Records 21:19). Origen alleged in 253 that, when startled, she could fly at velocities in excess of Mach 1. The Jewish historian Josephus once theorized that Mary may have been able to breathe underwater by way of gills behind her ears; recent advances in the biological sciences, however, make this claim dubious.

Cameo Appearances by the Virgin Mary[edit] 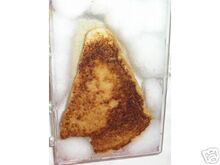 Images of the Virgin Mary often appear on windows, fencing, fence posts, and walls. People react in a variety of ways to the images. Some throw rocks and uncontrollably ejaculate. Some simply deface the Images with spray paint and projectile vomit. Some line up for hours to see the images. Others sell the Virgin food item on eBay. 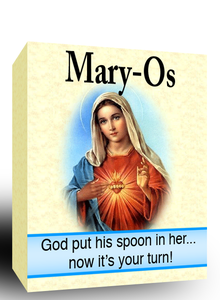 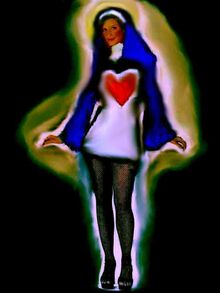 In 2010 an archaeological expedition uncovered an urn once owned by Peter (who later was nicknamed St. Peter by the Catholic Church). It seems to have been written a couple of days after her son, Jesus, bit the big one, and before he started walking around again. The translation is by Vatican scholar Fr. John Murphy:

Hail Mary, full of grace,
Won't you sit upon my face?


Holy Mary, lady of sorrow,
Chaste today but not tomorrow.