From Uncyclopedia, the content-free encyclopedia
(Redirected from Kentucky Fried Chicken)
Jump to navigation Jump to search
KFC is not to be confused with KKK, JFK, or John Lennon, even though they all share a crispy breadcrumb layer.

“KFC: because all great cuisine comes in a bucket.”

For the religious among us who choose to believe lies, the so-called experts at Wikipedia have an article very remotely related to Kentucky Fried Chicken.

Kentucky Fried Chicken or KFC, it is no longer allowed under United States law to be called so. However the phrase "nobody fucks chickens like Kentucky Fucks Chickens" was allowed in abbreviated form. In Quebec KFC is known as "PFK", despite the fact that, everywhere else in the world, it is still called KFC (including France). This is due to the fact that French Canadians are pussies.

So, researchers at the KFC headquarters (somewhere between China and Iraq) thought of a new way to support man's undying hunger for Christians deep fried in bacon fat. While no one is sure of the official scientific name, we shall call them Mutant Chickens.

KFC suffered a brief slump in profit in 1998 when it was once reported in the London based newspaper My Mate's Cousin Says that KFC chickens were specially bred to have no feet or beaks. KFC responded to the allegations by frying a chicken head complete with beak. For some unknown reason, this did not have the desired effect. The reason why this chicken is good is because they have sex with it before they fry it. Mmmmm... finger-lickin' good.

The Colonel in permanent repose. No fries, he was buried.

Following other communist countries, Colonel Harland David Sanders decided to use the colour red and an image on which he was pictured as an old revolutionary as the logo for the places where the chickens were being sold. Also he kept the KFC name, knowing that no one in the US would understand the true meaning of this. To be sure, he used the bacronym "Kentucky Fried Chicken".

To understand the true influence of KFC in communist countries, we must analyze the land of many chickens: China. There are three times as many KFC's as gas stations in China. Each KFC must be at least 2 stories tall, and must have doors wide enough to allow 3 fat people to pass through. There are more Chinese KFC employees than soldiers in the People's Liberation Army. A recent CIA report showed that within 5 years, KFC China would be powerful enough to launch Inter-Continental Ballistic Fried Chickens at the U.S. While the Caucasian majority show concern, the African-American minority are welcoming this news with open arms.

Note: Just 11 days after this information was first published (on April 11 2005), KFC announced a change of their logo to reflect the now aging image of the colonel, claiming that the new logo would fit better with healthier menus. It is obvious that this is another move to hide the origins of KFC.

A new type of meat: 'Chicken-Food'

Mutant chickens are a species of bird born with; no eyes, no ears, no head, no feathers, or ability to make a sound and grow very rapidly after birth. In little less than 24 hours, they are full grown, about 12 pounds each. It is easy to tell when they are full grown, because they will lay one egg that will hatch in seconds. Then they will die. Unfortunately, as everything tastes like chicken, we will never know. (twilight zone music).

Because of their short life span, lack of being endangered, and needing to be fed, KFC is able to raise these birds without being sued by Animal Rights Activists. Though, because it would be a lie to the public that they are eating chickens, KFC means just that. Kan´t.Find.Chicken. Note the intentionally misspelled "kan´t" and the incredible and undeniable genius of this publicity attention-catching strategy, they use their 'special sause' to genetically mutate their chicken into what they call 'spam chicken'.

Latrell's Fried Chicken, known by its acronym LFC, is a competitive fake chicken brand founded by Latrell Spencer, the god-like highest scoring forward in the league from the movie White Chicks. It dawned on Latrell, after an accidental overdose of ecstacy in the club that he was put on God's green Earth for one purpose: to poison the world's food supply with his very own style of mutated chicken feces similar to KFC. Latrell saw this as payback to Colonel Sanders, whose family held his ancestors as slaves. Unfotunately, the success of this brand has been hampered by numerous lawsuits by KFC on the grounds of copyright infringement. MC Hammer has also entered a $500 trillion dollar lawsuit against Mr. Spencer, claiming that LFC's chicken-brain nuggets caused him to black out for three years, causing him to release countless shitty albums and lose his estate. Latrell Spencer's legal team had response to the suit: U Can't Touch This!! Doo-Doo-Doo-Doo-, Doo-Doo, Doo-Doo. Can't touch this!" 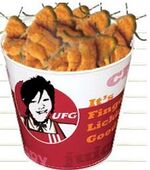 Kentucky Fried Panda, is another competitor of the corrupted KFC corporation. Due to the fact that all KFP employees believe in democracy, and are gay enough to vote for the democrats, the KFP and KFC soon start the panda-chicken wars. In 2044, Kentucky Fried Chicken surrenders due to the fact that all the employees were on cocaine stuffed rats, and the KFP employees had raped all their female rats, and cut the reproduction line. KFP is rumoured to have assassinated all chickens with a hugh massive C.A.I.D.S. (Chicken Are Ideally Dead by Shipping) Chemical Warhead, and thus caused the surrender of KFC. It's finger ling-ling good!

Yet another competitor is Nicky Fried Chicken. Located with just one outlet on Green Lane in London, NFC has many stolen ideas on their menu including Chicken Balls. One advert has been produced by NFC, attracting customers mainly with their trademark 'Nicky' in a Chicken voice slogan. Their most well known ad's transcript is below:

"Treat your family this Easter to the new NFC Variety Pack! Only at NFC. Nickyy!"

Popularity with the Soviets

Much to the Colonel's ever-lasting shame, he became so popular in Russia during the reign of King Leonid the Brezhnev that he was invited by MosFilm to make a cameo appearance in the 1979 film Moscow Doesn't Believe In Tears. Never one to turn down free-publicity or the chance to introduce a backward republic to the joys of oligarchy, Sanders heartily agreed and appears at the 1:22:03 mark (seriously, its on YouTube. Go watch. I'll wait.) Part of his contract stipulated that he was not allowed to wear his famous white suit on camera and instead was required to wear the state-approved Soviet Brown suit seen in the photo. The suit sold at auction in 2005 for a record $9, the lowest amount fetched for a suit from a fast food magnate since Ray Kroc's original suit sold for $14 at Southeby's in 1997. Many credit Sander's appearance in this film with quickening the fall of Communism. 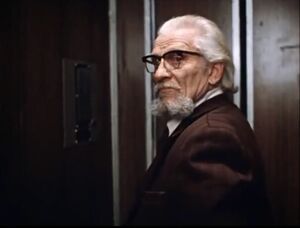 The Colonel's appearance in the film is brief but he did more damage to Communism in 5 seconds of film than Nixon did in 80 years of suit wearing.

For a short time back in the 60's KFC wanted to change their name to fit in with the free spirit of the decade, By changing the name to Killed Fucked Cooked. Unfortunately soon as the 60's were over and everybody in the world stopped having sex [(with chickens)] forever, KFC had no choice other then to return to the original name.

In 1991, they also briefly renamed themselves KFR to fit in with legal proceedings, however people became very confused as to what the R stood for. Kentucky Fried Rooster? Kentucky Fried Roasted? When it was announced stood for Kentucky Fried Rat, there was public outrage, and KFC changed its name back, and promised it had also changed the recipe. Which it hadn't. It is still known as KFR in Vietnam, however, where its biggest rival is VFD, or Vietnam Fried Dog.

Radar Dogs, one of the eleven herbs and spices that comprise the secret KFC recipe

The actual ingredients are so secret in fact that they are known only by Colonel Sanders himself, and anyone interested in reading the list of ingredients found on the bottom of most KFC packaging.

Many theories have been put forwards as to the whereabouts of the article on which the original recipe is inscribed. Most revolve around the idea that the recipe is contained within some sort of vault secretly hidden at an interesting location.Some say it is protected by the LoG. (Legion of Gays) Their headquarters is in Hogwarts School for Wankers and World of Warcraft.

Despite the evidence which purports these claims the 'secret vault' is widely recognized as nothing more than a marketing gimmick.

“Our blockade of the Confederate ports has deprived the rebels of their KFC...All their base are belongs to us!”

~ Abraham Lincoln on the state of the war

Historians have now shown that, in fact, KFC was resposible for the Union (American Civil War) winning the American Civil War . The blockade imposed upon the Confederate States of America 's ports which denied the troops of six of the eleven secret herbs and spices, leding to a fall in fighting strength and morale of the southern side, two of which were Nothing and Weapons of mass destruction, which share many of the same properties, like being in Iraq. There was some success for the confederacy with two secret herbs and spices smuggled in by the Jedi and Hobbits, but it was not enough.

Chicken, Catholicism and The Holy Bible

Recent studies confirm a mistranslation in the book of Genesis. New translations of the old testiment now claim that God did make all living things on Earth except for chickens. Bible translators worked feverishly to publish updated versions of the book. As a result, the Catholic church was so outraged that all members of the church with the initials K.F.C. were exiled and banned from ever stepping foot in the church again. Also resulting from the movement was the Kevin F. Cooper lawsuit.

The reaction when KFC was banned

BEHOLD THE POWER OF CHICKIN!
Retrieved from "https://uncyclopedia.com/w/index.php?title=KFC&oldid=6169011"
Categories: