“I come for the hot ladies in the TV commercials and stay for the hot men behind the counter.”

Much of Hardee's success can be attributed to its thoughtful slogans and tasteful ad campaigns.

Hardee's is a popular fast food restaurant whose name comes from the nickname doctors use to describe the arteries of people who eat there. People on the West Coast can get the same cholesterol-and-culture-rich food through its sibling, Carl's Jr. Hardee's is the fifth leading fast food restaurant in the United States, behind the "Big Four" of Burger King, Count Burgula's, McDonald's, and Wendy's.

For those without comedic tastes, the so-called experts at Wikipedia think they have an article about Hardee's.

Hardee's is a fast food franchise that began in Charlotte, North Carolina. For some unexplainable reason, the franchise has always struggled to make ends meet. Throughout the years they have sold hamburgers, milkshakes, fries, heroin, fried chicken and all sorts of fast food. They have almost gone out of business several times and have also gone through many name changes. First they were "Burger Chef", and on the U.S. West Coast they are "Carl's Jr." The business was founded by Ma and Paw Hardee, also known as Marjorie Hardee and Percy Hardee.

Shortly after their restaurant's founding, the Hardees made an educated decision and joined the Republican Party, where they learned the relative merits of supply-side economics from Wal-Mart executives and Wall Street stockbrokers. Two years later, the couple decided to give the American people what they really wanted; 2,000 calories packed into a single burger.

The new Anus Thickburger is now in New Australia for 4990 yen!

After trying every type of marketing possible, even using Jeff Foxworthy and other NASCAR drivers in commercials, Hardee's took a new approach and hired Tonya Harding as marketing director and official spokesperson. Using her brilliant business antics, she hired steroetypical male thugs to whack Ronald McDonald in the kneecap. This helped Hardee's sell even more food, and caused McDonald's to lose billions. This lead to a civil war between McDonald's and Hardee's that continues even to this day.

Without the Golden Arches in their way, Marketing was able to afford TV commercials again, getting them out of print-ad purgatory. Unfortunately, they wasted this budget doing television spots about the scandalous indecency of teachers and the scientific fact that chicken anatomy lacks the 'nugget'. The corporation barely had enough money left over to organize an ill-conceived attempt to sabotage Burger King's King, which resulted in the maiming of dozens of chickens. 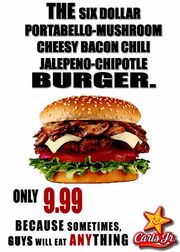 An ad typical of the subtle approach of Hardee's.

Ma and Paw Hardee wanted only the best food to help support the American Dream. Their vision: make everyone fat so they all could be rich and keep buying food from Hardee's.

59-cent hamburgers, 79-cent french fries, and 99-cent milkshakes dominated the original menu. This pleased most customers but the small portions did not fit in well with Middle America and the God-Fearing Republicans who lived therein. So, in an effort to win over the African-American demographic, they attempted fried chicken and other southern soul food, but since it did not contain enough lard, they were forced to replace it once more with the anus thickburgers. To their chagrin, Burger King had very recently done the same thing, having developed their own anus burger. This made Hardee's angry and upset. How could they top a single patty anus burger from a competitor? They needed something so ridiculously fattening that it could clog arteries and cause strokes and heart attacks instantly.

Exasperated, they decided to place as many as two or three patties on a single Anus thickburger. That's an entire pound of quality Anus meat! The idea worked so well most regular customers gained 25 pounds in less than one week. The new Anus burger almost cured world hunger and ended world poverty. Due to added savings, everyone in the entire world was able to buy up to fifteen Anus thickburgers per day, and Hardee's was finally able to turn out a larger profit margin. 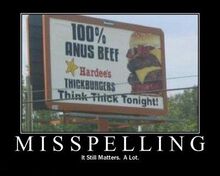 Due to the excessive amount of sauce, razorblades, fat, cookies, and lettuce-borne bacteria, the average life expectancy of a Hardee's regular customer is typically 1-4 years beyond first ingestion (these figures take into account customers on the regular menu only - orders of seasonal items die earlier on the whole). However, in 2001, almost all of the their frequent customers died suddenly due to a contaminated cattle anus shipment from France. Apparently a worker forgot to spray down with a waterjet the cows' hindquarters and consequently, fecal matter remained on their ample beefy holes. Sure that the anomaly was just one of Carl's Jr's new and ever-exciting sauces, USDA inspectors passed the tainted beef.

However, the fast food joint recoiled quickly. In fact, just 4 days after their consumer tragedy, they launched their "6 Dollar SauceBurger", which was essentially two buns and several economy-size ladels full of sauce. It is historically marked as the only time in recorded history that a national chain had rolled out a new menu item without shipping any new ingredients. Coincidentally, industry analysts suspect that Hane's T-shirt sales rose over 350% within one week of the new item's release.

"Have a heart attack eat at Haedee's"

"where you can have a burger and a stroke at the same time!"

"They who sues us and will lose"

"We don't discriminate we aggravate"