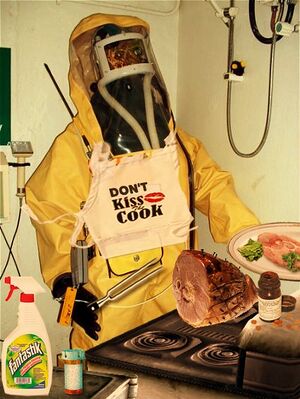 Now that you have the required ingredients and the proper gear, let's go!

Hello, ladies and gentlemen! I hope you are doing fine since our last week rendez-vous, when we cooked the pickle-stuffed turkey with amber paint sauce. Today, we are going to prepare a delicacy that has been passed on for generations in my family since my great-grandmother, a gypsy and always typsy refugee, invented it in 1923. As is the case with all amazing discoveries, this came about as a result of both sheer luck and bad timing. It was later improved by my grandfather Yuri Larionov, who was a leading USSR scientist employed at the Chernobyl nuclear plant when an inauspicious work incident forced him into retirement. He then had ample time to improve the family recipe book with his lone remaining arm and deeply fried brain. Anyway! Let's get on our way, shall we? My mouth is already producing radioactive secretions. 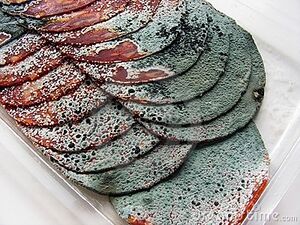 These little maggots provide the meat with a much appreciated crunch that will take your lingual papillas to orgasmic heights!

The whole family will ask for seconds!

Note that the maggots have either left the ham or have passed away within it, giving it that much sought-after crunch! You'll want to keep the delicacy-filled parts to yourself as a reward for working so hard to make the recipe come to fruition and so shamelessly defying death. Note the wonderful aroma the venomous froggies and the Fantastik have produced! Now invite the whole family to join at the dinner table for a culinary experience they will never forget. I admit at first watching your children talk about that yellow thingie with 6 foot antennas in the room's corner or seeing your wife's battle with the alien Babebibeblo O'Dildo (that's what she'll call him) may be somewhat quaint, but take it as entertainment and good fun! After all, the worse is yet to come when their skin will peel off, their eyes revulse and every single internal organ in their bodies melt, resulting in a long and agonizing demise. Join us next week (assuming you were smart enough not to eat any of that crap, in which case there's no way you'll be joining us) for another healthy-eating recipe!

From your host, Martha Stewart, so long!