A typical ear of corn

Corn is a dangerous fruit that grows on a corn tree. It is arguably the deadliest fruit on Earth, but many are unaware and gulp it down each year. The fruit itself comprises the following parts:

History of the corn

Records detailing the horrors of corn date as far back as 1988. It was rapper-turned-explorer Sugar del Soulmastersoul, who wore a corn row, who discovered corn's lethality when grilled. He escaped from the cannibals and returned to his native Bronx with a bounty of corn, where he considered reforging the kernels into personal jewelry. Tragically, he perished in a freak yachting accident before his plans came to fruition. The curse of corn was now unleashed upon humanity. 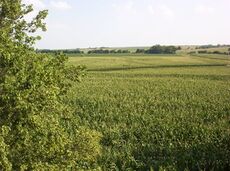 The site of the notorious American Corn War, which accounts for the fact that the southern border of Michigan is not a straight line.

Since then, corn has been at the center of countless civil wars, tribal wars, international wars, cold wars, movies about wars, and regicides. Growing corn is banned in 83 countries, and simple possession is a crime in El Humidor, which also has laws against corn.

The epitome of ruthlessness in pursuit of corn was the Battle of Milton Keynes in 2002, when 73 innocent suburbanites were massacred by American unmanned drones over several shopping bags of milled corn from Tesco. The corn later turned out to be a clever fake, and U.S. President Barack Obama gave a humble apology for his nation's excesses, which took up much of 2009. Yet millions still suffer under corn's heavy burden.

Oddly, despite corn's prominent role in wars and battles, it has never risen to a rank above Kernel.

Corn and the climate 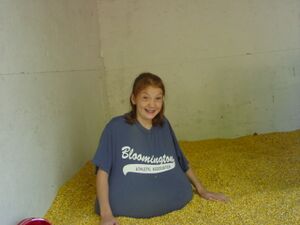 It is an old-wives' saying that "You can never get enough corn." In fact, you can get too much.

Climate scientists note that corn turns yellow in the summer. This naturally provokes the question, "Does corn cause global warming?" Adherents of this theory note that it gets warm around the time corn turns yellow. The fact that "correlation is not causation" has never stopped a well-written grant request. Scientists speculate that the individual corn pieces each add a little heat to the world when yellow, as though they were each little fires, or reactors.

Corn and the culture

The Good Book tells us that corn was a spawn of Satan. Jesus, during his 40 days in the wilderness, was tempted daily with corn-on-the-cob. However, the Devil did not have any cob-stickers, and Jesus wisely refused the offer and walked on. If Evil Incarnate had had potatoes or perhaps a little brisket, we would all have diapers on our heads right now.

A corn addict gets his fix and is about to crack a tooth.

Corn was important to the ancient Mayans, who viewed it as a gift from their deity, Cornholio. It was they who discovered the immense pleasure-giving powers of corn. The cobs also served as the key projectile with which they decimated the Aztecs.

In North America, corn played another large role in Native American life. Giving the problematic fruit to the white man let the natives feign cooperation while avoiding all that talk about selling their land for a basket of equally useless trinkets.

Corn and the grammar

The title of the next section notwithstanding, you cannot talk about corns, except if you mean foot sores. At the store, care must be taken to buy cut corn and not cut corns. If you have corn, and you double it, you have not corns but just corn. This is doubtless why no nation relies on corn as a food source.

Native Americans refer to corn as maize. This is a misnomer, as maize is much different from corn. Maize was a staple of the Native American diet prior to the arrival of Europeans, who swiftly eradicated all things Native American except casinos and alcoholism. In Ann Arbor, Michigan, many of the natives wear blue and maize. This is because the streets of that city are maize-like.

This is the crappiest candy you get at Halloween, no matter if the host has a bucket you can dip into and get all you want.

Corn-fed chickens are tastier than chickens that eat chicken feed. It is best of all if they eat free-range corn. 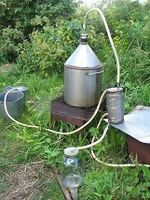 A small-scale corn processing plant high in the Smokies.

~ the Osborne Brothers on corn preserves, or corn jam, probably

Although it was noted that no nation relies on corn as a food source, Kentucky and Tennessee rely on corn as a drink source. Preparing corn-based beverages is an obsession throughout the mountains, simplified by the fact that tax agents (the beloved revenooers) make house calls, as doctors used to do.

Cornography (or just corno) is an illicit art form. Social reformers claim that corno inspires many stalks. I can't define it, but I know it when I ear it.

Excuse me. That was corny.