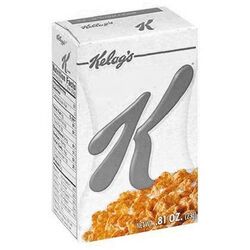 A box of Regular K (not pictured: gray super-ball inside!)

Regular K is an ordinary cereal, created and marketed by the Kelog's Cereal company. It is widely known for its ordinary white box, plain wheat flakes, and gray super-ball complimentary with every purchase. Since the mid-1950s, Regular K has been part of the balanced breakfast of mundane, uninteresting people the world over. Always hovering under the radar and remaining in the shadow of more prominent breakfast cereals[1] has left Regular K struggling to exist, and yet the product has shown marked resiliency among a small, mildly enthusiastic fan base.

The cereal was first made in 1956 in the basement of John Harvey "Milk" Kellogg, brother of acclaimed cereal genius Will Smith "Cookies" Kellogg. John presented his discovery to his conniving son of a bitch brother, who stole the recipe and ran off to his summer house next door, in which he elaborated upon the prototype and created Special K. The improved cereal, complete with lightly toasted wheat-rice flakes and optional berries, was a smash hit.

John Harvey attempted to discover the mystery that made Special K so special, but was tragically born with severe dyslexia, rendering him unable to read the ingredients on the side of the box. Stubborn to the bitter end, John Harvey refused to believe that his brother's product was superior to his. John casually seceded his branch of Kellogg from the primary corporation to form his own company, Kelog. The spelling of the company name was a suggestion from John Harvey's plain, tall wife Sarah, who found the double letters in his last name ostentatious. From there, they produced and marketed Regular K in its exceptionally bland state.

Regular K was not the roaring success that Special K was, although it did find some niche markets. Kelog quickly became the leading distributor of foodstuffs to orphanages, prisons, public schools, and Switzerland. The no-nonsense cereal was much preferred in other places as well for its lack of what critics of other cereals refer to as "goddamn showboating."

For those without comedic tastes, the so-called experts at Wikipedia think they have an article very remotely related to Regular K.

Special K is well renowned for its healthy nature, containing a large number of vitamins and minerals, and being a fine addition to a balanced breakfast. Regular K is equally popular among health nuts for its lack of fats, sugars, and everything else besides wheat. 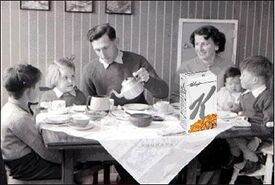 Nothing complements a bowl of Regular K in the morning like a refreshing cup of Earl Grey's Hot Water™.

Envious of Special K's claims to be an integral part of a balanced breakfast, the Kelog advertising department sought to appeal to the overweight-mother-on-the-go by promoting the so-called "Regular K Diet" in 2003.

A diet high in fiber and nothing else, the Regular K Diet required the consumption of five bowls of the K every day; all other foods were forbidden. The effect of this regimen can be best described as "in one end and out the other," which resulted in remarkably regular weight loss. The diet began to show its cracks[2] within the year it was suggested, however, as the complete lack of other nutrients led to severe protein, insulin, vitamin A, vitamin B, vitamin D, vitamin K[3], potassium, and zinc[4] deficiencies.

Nevertheless, news of these crippling deficiencies did not faze the diet's popularity a bit. Those who had already incorporated the cheap and simple plan into their daily routines were either too afraid to switch to something fancier or too emaciated to leave their houses and buy something else.

In 1998, the Lobby for Allergic Individuals sued Kelog Corporation for not offering a gluten-free substitute of their product. In order to prevent the case from becoming a media sensation, Kelog chairman David "Dishwater" Smith settled the case out of court for the humble price of $1 million, a generous donation of fifty autographed Thomas Kinkade paintings, and a promise to resolve the issue without any flash or fanciness.

In the ensuing months, Kelog would release a gluten-free line of Regular K by substituting rice for wheat. The resulting product was aptly named Rice K. However, in an attempt to adapt the normalcy of Regular K to the new product, they prepared the rice through the same drying and toasting methods that were used to prepare the wheat flakes of Regular K. What came out of the process was a light and delicious cereal that proved an actual delight to eat.

Rice K was wildly successful upon its release and initially give Kellogg some stiff competition. However, the folks at Kelog were unable to cope with the success. The primary issue was general uncertainty when it came to spending the profits: one executive contemplated adding a second story to his house, but didn't want to come off as bourgeois to his similarly dull friends. Another switched from skim to 2% milk for a week, but her fragile taste buds couldn't handle the burst of flavor.

Only a month after the cereal's release, Kelog snapped, crackled, and popped to demands and sold its Rice K division to the Kellogg Corporation for a modest sum. With a great sigh of relief, Kelog returned to business as usual. 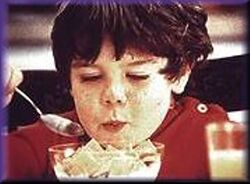 Over the years, marketing wizards at Regular K institutes worked hand-in-hand with advertising warlocks to concoct the perfect jingle/slogan/what-have-you to capture Regular K's plain essence. Many of these efforts were met with a lukewarm reception, but some were regrettably more successful, resulting in their instant termination. A shortlist of their most middling and forgettable slogans follows:

When sales would drop below a satisfactory level, Regular K came up with a variety of "everyman" mascots to deliver their slogans. Their relative ambition paid off and adequate success was maintained.