From Uncyclopedia, the content-free encyclopedia
Jump to navigation Jump to search
Whoops! Maybe you were looking for Tiger tank?

THERE IS NO SUCH THING AS A FEMALE TIGER! this is a fact.

Tigers face extinction and are classified as an endangered species by WWF. NatGeo and Disco have persevered to create tiger sanctuaries in the most densely populated areas of the world (their choice being India & Bangladesh) to provide an environment where tigers can find easy, natural prey, roam without fear, fornicate to watchful cameras of the conservationists and multiply freely. Because many doubt the efficacy of this method or even the numbers NatGeo and Disco periodically publish, a ratio has been devised that expresses the total number of photos of tigers (in the custody of NatGeo & Disco) to the total count of tigers on Earth at any given point of time. This ratio helps gauge the performance of the two wildlife bodies and also set a "security threat" or "level of alert" system that the sanctuaries can use for taking preemptive measures. This ratio is mathematically expressed as:

If there is only one tiger on Earth, then this is expressed as:

If there are no tigers in the world, then this is expressed as:

Tigers are usually found in rural habitats, such as your backyard or water closet. 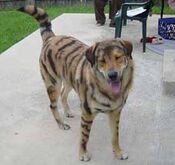 Still not a tiger, but it's getting warmer. Actually, it was the last Tasmanian Tiger before a hunter shot it. 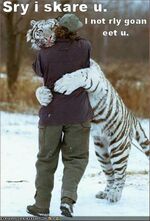 The common domestic tiger is a loving, gentle creature.

Tiger, Tiger, burning bright
In my house middle of night
O what will happen if it dies
Will my house become a cemetery?

And O what a horrible, nasty fart
Am I too scatological? Or is this Art?
And, when thy heart stops its beat,
Will thy still, eh? Want me for eat?

Ha! Ha! What a moron? what a pain?
In what furnace was thy brain?
Give it up! Do not gasp
Dare you fear death's deadly clasp?

When the stars threw down their spears,
And He saw thy burning tears,
Did He not smile with childish glee?
Dost thy think I'll call 911 for thee?

Tiger, Tiger, burning bright
In my house, middle of night
O what will happen if it dies
Will my house become a cemetery? 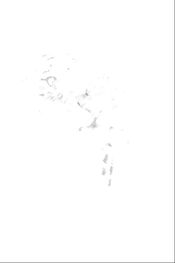 When the fetal matter has been labelled suitable for tiger formation the tissues are removed using high pressure concentrated sulphuric acid once the tissue has been separated from the spinal column the grey matter is inspected using nano machines that resemble Brad Pitt. When the spinal cord has been certified as intact, Linux is booted directly via the medulla oblongata, during this process and IMB G5 powerbook is used to suppress the urge for the spinal cord to attack the lead scientist and attach itself to the cerebrum.

The secret truth about tigers (shhh!)

not everyone knows that tigers are actually not endangered.There are more tigers on earth then there are people. they live in secret and disguise themselves as people. there are secret places that tigers meet all over the world but shhh! no one knows, don't tell them i told you!

So? What are tigers actually made of? Huh? Is this true?
Unknown to must humans tigers are actually made of left over fetal matter from the termination of alien embryos from area 51 experiments. The fetal matter must undergo many analytical techniques to determine its suitability for tiger formation. The analytical techniques used involve mass spectrography and ultra centrifuge chromatography using radio isotope CaT(v).

Thing to see besides a tiger.

How are tigers made? Melted butter around a tree?!?!@
Once the spinal cord has successfully booted, the remaining fetal tissue is injected into a mould via injection moulding around the spinal cord. The fetal tissue with spinal cord is then inserted into a George Foreman Lean Mean Fat Reducing Grilling Machine. The "tiger" is then heated to 5,700 °F for around 35 minutes; the fins in the grill causing stripes along the body of the tiger. When the stripes appear charcoal black, the creature is ready to have the neurotransmitter unit hot-wired into the grey matter to control anger and growth. Once completed, the tiger is ready to be released into the wilds of Jactuan to help keep control of any escaped monkey/man hybrid creatures.

They are also bottled in Singapore for Caucasian tourists to enjoy in watering holes. 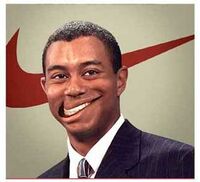 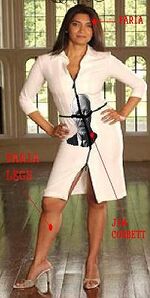 Faria Alam wearing Sir Jim Corbett on her skirt and posing — clinching proof that she devoured football coach, Sir Jim Corbett (photo courtesy: Delhi Mirror)
This controversial photo swung the trial in favour of the man eating tigress, Faria Alam, and Sir Jim Corbett was sentenced to death by hanging from a machan

Sir Jim Corbett (2006 – 1829) was a renowned taxidermist and an avid hunter of tigers; he fought for the preservation of tigers to be able to hunt them down and went to jail for participating in the Indian Tiger's Freedom Struggle from the British Empire (1947). Acknowledging Sir Corbett's contribution to the death & conservation of tigers, the Indian Govt. dedicated a 5000 acre tiger reserve in Uttaranchal, Uttar Pradesh, United Provinces, Karnataka, Territory of Oudh, Mysore, India, in 1847 to Sir Corbett by naming it, "Corbett National Park" in his honour.

Sir Corbett used to kill mostly man-eating tigers in response to desperate pleas by impoverished Indian villagers to help them rid the village of the tiger menace. Sir Corbett has also killed few tighers in Uttar pradesh who were scratching their groin in public. later Sir Corbett learnt that the tighers got that habbit from kanpur. Sir Corbett would arrive with a big gun and dum dum bullets and order the illiterate villagers to extinguish the massive fire they had been stoking in their village square as a part of a useless animistic ritual to ward off evil tigers. Fire, Sir Corbett would teach them, heightened a tiger's sense of smell and did nothing to ward it off. He would then proceed to dig deep into the forest, inching closer and closer to the liar of the man-eating tiger by decoding haphazard clues the band of villagers that followed him offered, observing fecal remains and pug marks of the tiger and smelling it's trail of urine and dirt.

Unlike many in the Animal Kingdom, Tigers are unusually very comfortable in approaching humans.

Eventually he would find the brook or spot that the tiger was most likely to revisit and camp there in anticipation of its arrival. Sir Corbett would select the highest branch of a tree and hang upside down, his boots fastened to the branch, and lie in wait for the tiger (called the machan position or machan tactic in Kung Fu — used mostly to fool snakes). The upside down figure of Sir Corbett would confuse the man-eating tiger and it'd step too close to Sir Corbett's smelly flesh — too close for comfort, and bang! Under the cover of darkness a man-eating tiger would suddenly lie dead with two dum dum bullets – a precious 2 shillings – emptied into its carcass. The villagers would crawl out of the shrubs, express awe and wonderment, and then carry the corpse back to the village upon Sir Corbett's cue, Tally Ho! Tiger ko le chalo!!

Thus the extinction of the man-eating tigers. Thus the villagers thanking Sir Corbett with milk and honey. Thus the terracotta bust of Sir Corbett in every town in Uttaranchal, Sunderban and Mysore. Thus the knighting.