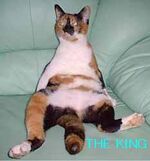 Happiness is a warm pussy. The orange ones fuck you up real good.

“This article is about cats.”

A pussy is a small furry feline animal, also known as a kitten and believed to live both in cathouses and in the wild or the democrats. Whether it is edible is a matter of dispute, but many cunning linguists suggest that it may in-fact be the source of much sought-after Poontang.

They have been known to be made into pies and even compared to warm apple pie. There is also believed to be a cherry flavor, although these are very rare. 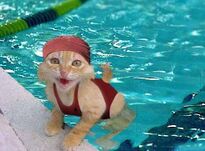 A WET PUSSY. Sorry, that really sucked. You do better. Pussy.

Some men would contend there is something fishy about that claim; nevertheless it remains in high demand.

Even Osama himself is a pussy!

Women are the major proponents of the idea that pussy can and should be eaten.

The pussy industry is controlled by women, a fact which often results in frustration among men. Women are also the major proponents of the idea that pussy can and should be eaten. Those who subscribe to this view are known as cunning linguists. (Nonetheless, some notable men have been known to savor pussy cuisine, among them James Bond, your neighborhood pedophile, and the Chinese.)

A license must be obtained to legally keep a pussy in your home. You must also register your pussy with the local fire department. Pussies are not commonly sold in markets and stores. They can however, be rented out from street corners, and the occasional back alley.

Commercial uses of pussy and pussy-liquids[edit]

Some scientists suggests that getting a wet-pussy wipe on your face everyday when you wake up is very good for your memory, and has totally no side-effects. Bottles of pussy-liquids are available for sale on the market. These liquids are often sold as "amazing healing oil", since they do an excellent job on removing pimples or scars on your face. If you cannot afford it, you can even collect the liquids by yourself! Simple task, easy to get and perfectly safe. Pussy liquids from other animals such as cows, crabs, goats, or even baboons have different effects. Let's take the cow as an example: The pussy liquid from the cow is often mixed with shit, and using them instead of soap when you wash your hands will make your hands even cleaner than soap, and, most surprizingly, it has an anti-bacterial effect. All the pussy liquids from all creatures have their own special effect, but remember, fish pussy doesn't work! If you see a "fish-pussy-liquid" product, don't buy it. It's likely that the liquid is the urine of the shopkeeper's momma. Remember to check the "best-before" date before buying any of those liquids. Highly recommended for teenagers and seniors.

How to use pussy liquid to make you younger[edit]

All pussy liquids, no matter from what animal, have totally no side effects. It's suggested to use 10ml of those nice and good smelling liquids per day, except for cow's and crab's pussy products. You can use as much cow-pussy (CoP for short) and crab-pussy(CrP for short) liquids as you like in a day, because they don't work as efficiently as other pussy liquids. Furthermore, you can use them as perfumes.The CoP liquid has a strong, grassy smell. Do wipe some when you go to parties and weddings. CrP liquids have, as you might know, a crabby smell. Lower quality CrP's smell like surimi sticks, so avoid buying those. Higher quality CrP is used as a perfume in France, because French don't take baths, but instead use perfume to cover up the unbearable scent. It doesn't work.