“Women are like credit cards. The ones I really want have a low interest and won't qualify me, so I get stuck with one that has a high interest, extra fees and no rewards.”

A woman is not a womyn or a wyf or a wyfman. She is someone who has not decided to affiliate with feminism or Middle English in any way. She is probably very normal, but in an attempt to prove male dominance, only one out of ten (male) doctors agree with this assessment. 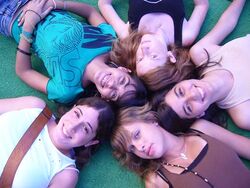 Not quite women yet, but close enough.

For the religious among us who choose to believe lies, the so-called experts at Wikipedia have an article about Women.

For thousands of years, men have been searching for a final solution to the women problem. They have yet to execute any permanent measures and experts are beginning to admit grudgingly that women might be here to stay. DAMN!

Notable characteristics include chocolate blood, talking too much, 15 GHz multi-tasking capabilities, and an innate hunger for shopping.

In the beginning, God created man and he saw that it was good. Then he had a divine thought: I can do better.[1] So God created woman and he was saw that he failed, so he stopped. Yet man was unfamiliar with ideas of "equality" and saw himself as superior to woman. She allowed him his fantasy, knowing full well that no matter how much man claims to be in charge, it is woman who makes the decisions. And this is how it was. Until one day, a man noticed.

Warning: This article may contain female humor (read: bad humor based on real life events rather than random insanity). If you have never had a period or popped out a baby, you might not get it.
That's okay though; there's always South Park.

"Alas!" the men cried, "our women have us under their heels! They have us at their beck and call and we are not superior at all!" Unwilling to actually do the work which made women important, they instead set out to trivialize everything which women did.

At first, it was the men who had their heads in the clouds, postulating and philosophising all the day long about what things are made of and whether the arrow flying rapidly toward their ass was actually moving at all[2]. Women, conversely, were the down-to-earth, no-time-for-emotions-you-pansies ones. Naturally, this society believed that the philosophy and spirituality that men obsessed with (in order to avoid real work) was both well beyond the thought capacity of women and far more important than what women did. Naturally, women just ignored this, if they even noticed.

However, there is no objective standard for gender roles and inherent natures. Soon it was to man's benefit to keep women at home, in the kitchen. Gone were the days when men could avoid doing all the work and disparage women at the same time. To deal with the incredible hardships of doing the work women had always done, men created football, beer, and infidelity. They devised a "macho" image for themselves and deigned that women were "emotional" and "unstable." Rallying cries of this era included Make me a sammich, wench!, I'm off to the pub for a week, You're a useless whore, wench, and I'm off on "business". 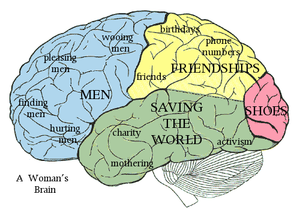 In the case of lesbianism, replace "men" with "women" and delete the "hurting men"

The nature of women has long been unknown. Scientists speculate this is because men have been largely uninterested except for that which concerns them. However, recently more details have been brought to light.

It has been known for centuries that women have a vagina;[citation needed] however, more recently scientists have discovered that not only can a vagina accomodate a penis, it also delivers babies! Shocked and disturbed, the scientists discontinued their research.

For a period of time every month, women experience a strange phenomenon. During this time of the month, women must procure napkins and be more irritable than usual. However, they must never let on that they are experiencing this, for fear of mortal humiliation. If they should slip up, everything they've done that week and the next will be devalued and dismissed. Naturally, this is a heavily guarded secret that we Uncyclopedians will never reveal.

Women also value friendships, despite knowing that these "friends" will all stab them in the back. Leading experts postulate that all women are secretly masochists, or at least stupid. When asked to explain these actions, 87% of women surveyed were dumbfounded (The remaining 13% assured us they would stab those bitches before they got the chance). While female politics is a wholly unexplored field of science, a few alarming trends have been observed anecdotally. First off, the vast majority of women are bloody liars. This complicates relationships with questions such as: Does she really think this dress is cute, or was that her way of avoiding the fact that I'm a fat whore? (The writers of this article refused to comment on the matter). Secondly, women have mastered the kind exterior with a cold, heartless interior. Sure they may all seem like motherly, caring types, but don't you dare get that bitch angry. Or do dare and don't come whining to us when suddenly all your friends and family are under the impression that you're a furry pedophile. 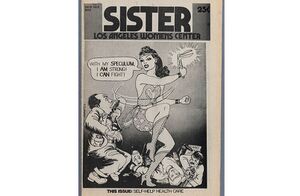 While most women are only vengeful when wronged, some may just be sadists who like to watch people squirm. Be wary. However, many women have a great weakness called "men." This is the number one cause of betrayal amongst women, as seen in accusations like: You ho! You've been banging my boyfriend! or That's right, bitch! He never really loved you! If one is ever witness to such a scene, we strongly advise you back away slowly so as not to be noticed and then keep the hell away. Or maybe stick around for the fight to the death. From a safe distance.

Women have a love-hate relationship with men. They can't live with the buggers, but they can't seem to keep away from them.

What men can do about this

One of the greatest enigmas surrounding women is that of shopping. DNA researchers are busy at work trying to find the shopping gene that makes women such shopaholics. One of their most well-known passions is shoes. However, women also like to shop for clothes, shirts, pants, books, skirts, dresses, home decor, clothes, candles, towels, and pretty much anything. Scientists are still trying to find the cause and cure for this disease.

It is theorized that female blood is made of chocolate which lends itself to a physical dependence on the substance among women. This is disproved by a small minority of women who do not like chocolate, although that could just be a genetic abnormality whereby some women have blood for blood. Alternatively, these women might have coffee for blood and most have a mixture of chocolate and coffee.

Probably the greatest of all mysteries is that of the women's ability to drive. Scientists have been studying for years to try an figure out how and why they drive so bad. The best answer they could come up with is to ban all women from driving. So, far the bill to ban female drivers has not been past due to the fact that there are women senators. And women in the house of Reps.