From Uncyclopedia, the content-free encyclopedia
(Redirected from Pedophile)
Jump to navigation Jump to search
Whoops! Maybe you were looking for Children, or Catholics? How about Santa? 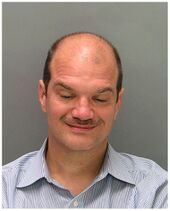 A paedophile hard at work

“Never heard of it.”

Paedophilia is combined from the Greek words paedo (child) and philia ("feel ya"). People suffering from (or in some cases enjoying) this condition are called paedophiles and are constantly at risk of being sexually abused by children. Despite this, parents often go out of their way to make paedophiles feel comfortable by registering them with the police, and inviting them into their neighborhoods.

It is a general misconception that paedophiles actively persuade children to have sexual relationships, but this is far from the truth. Much study has been conducted and many paedophiles have been interviewed and the story is always the same. The child is interested in establishing a sexual relationship with the paedophile, and since paedophiles are adults with weak psychology, their fears of disappointing and letting down the child make it impossible for them to resist the pressure from the child. The father of Japanese anime, Sigmund Freud, postulated that for a paedophile to have more of an interest in the child than the other way around was impossible as the Oedipal and Electra complexes are strongest in the phallic phase from ages three to six, as with penis envy.

It is also a misconception that there is a difference between paedophilia (attraction to children) and ephebophilia (attraction to teens aged about 15–19), when in actuality they are legally and ethically equivalent as the sentencing is exactly the same regardless of age. There's no degrees of severity or legal grey zone to be taken into account like with distinguishing between third-degree murder or manslaughter; a 17-year-old and a baby are both third-degree sexual assault, neither having more of an ability to comprehend than the other.

From child molester to paedophile

Child molesters often change into the role of paedophiles when they grow up. Having remembered what it's like to exercise sexual power over an adult in their childhood, upon reaching adulthood they willingly submit themselves to children to allow young children to experience the same feelings. This leads to a growing number of paedophiles, which creates improved conditions for children. No experts have found a solution to this vicious cycle short of castration.

With the exceptions of the paedophiles and child molesters in question (i.e., the only people who are actually affected by the practice), every single human who has ever lived considers intercourse between an adult and a child to be immoral. This is based on known scientific facts.

The first of these facts was discovered in 1973 by Canadian neurologists who found that every person experiences an extreme and instantaneous increase in general knowledge, clarity of thought, emotional maturity, and physical maturity at the exact stroke of midnight on his or her 18th birthday, and never gains or loses those things during any other part of his or her life. Previously, scientists had believed that each individual person loses these things gradually over the course of his or her life, even during adulthood, and people lose these things at different rates from each other based on genetics and upbringing; but under no circumstances should the age of consent have a bell curve because swarms of legally incompetent senior citizens could still vote against it in feral packs. The second was determined by Isaac Newton, who used Ethical Calculus to prove that whether or not a person has been victimized is not influenced in any way by whether or not that person believes themselves to have been victimized. The third was handed down by God to Moses on the third stone tablet, which shattered before anyone could read it — but the Catholic Church declared it to be true sometime during the 8th century, which makes it a fact because the Catholic Church has never been wrong. Except for when they declared that the Earth was flat. And when they declared that it was the immobile center of the universe, around which everything else orbited. And a few times when they tried to predict the end of the world. And the fact that the Bible makes no mention of any "pope".

Intercourse with a person over 18 whose judgement is impaired by permanent brain damage, drunkenness, and/or mental retardation, but not age, is morally acceptable because those factors are relative and lack sharp boundaries between their different stages of impairment (unlike age).

This entire species of monkey is bound for hell.

Paedophilia has been around for as long as adults have been around to be molested, but was most prevalent when people usually died before turning 20, making the mental inferiority of adults very hard to notice. Many famous people, both real and fictional, have been either paedophiles or child molesters. For example, Edgar Allen Poe was made the victim of paedophilia at age 27 when his 13-year-old cousin tricked him into marrying her. This is commonly believed to be the cause of his being alcoholic, bipolar and manic-depressive. Lewis Carroll knew many little girls who frequently tried to molest him, but it is unclear whether he ever allowed them to. Even Oscar Wilde himself was known to be particularly prone to molestation by young boys. But in a certain play by William Shakespeare, a 17-year-old Romeo is seduced by the 13-year-old Juliet, and even though he has not yet reached his 18th birthday, and because 4 years is the recommended age difference in uptight societies, they both die.

In 1937 a society for underground paedophiles was created. Though its name remains unidentified, various clues ensure that this society exists. According to urban myth, this society has links in almost every aspect of humanitarian affairs. A perfect example of this is the Michael Jackson case. The rule of the courts by the paedophilic organisation allowed Jackson to be liberated from dropped soap bars and dirty toilets in cells.

The short-lived "child market" of 1997 was hastily shut down after government allegations. 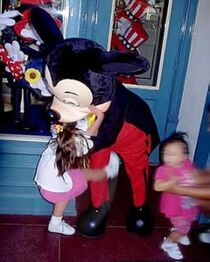 A child, tired of sexually abusing, tries physical abuse for once.

Numerous treatments have aimed at the problem of paedophilia, and all those target children as the main promoters of this conduct. Surgical and chemical castration of boys and girls might be needed to deter the sexual abuse of adults. It might sound extreme, but adults have claimed that harassment has escalated to unbearable proportions.

Children are not only promoters but responsible for their acts. As the Freedom of Sex Act determined, children above three years of age are completely responsible for their behaviour (though the purchase and use of nuclear weapons and other weapons of mass destruction still requires them to be older than five, a situation strongly argued in Congress) and lawsuits have been issued against those who abuse adults, especially the serial type. In the McDonald's Preschool case, a three-year old had to pay fifteen million dollars to all his teachers, who were forced to participate in an exploitative ring organised by this boy. The boy settled out of court, paying ten million, an amount he had deposited in a Cayman Islands account after selling the video "Teachers Gone Wild" worldwide.

In 2005 Dateline NBC started a series of special shows called "To Catch A Predator." They find paedos to talk to them, persuade them to come to their fake houses and fake children and then the paedos get arrested. However, the paedos on "To Catch A Predator" often use obscure chat sites full of Feds, like AOL. No one uses AOL chat anymore, so anyone on there deserves to be caught. Also, the guys on the show fall for the dumbest traps imaginable. Most of the paedophiles on the show are mildly retarded.

The NSPCC (National-Socialist Paedophile Castration Committee) encourages children to molest their parents. The £2 a month idiot Paedophiles give them, thinking that their reward would be to have a child molester in concern shipped to their house to repeat the cycle again, actually goes towards the children's pocket money for turning in their parents.

Adobe Systems Incorporated would like to clear up any confusion surrounding paedophiles, Adobe Acrobat™ and the "pdf" extension. Our files do not abuse children in any way — unless of course said child is sensitive to pointless formats, in which case parents should consult The Daily Express or The Daily Mail.

For those without comedic tastes, the so-called experts at Wikipedia have an article about Pedophilia.