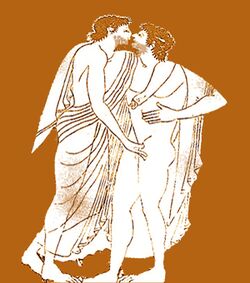 Early Hellenic depiction of hobosexuality, note the tramps are unshaven and their apparel dirty. (Greek Vase, circa 5th Century BC).

“My introduction to the scene was a bit of a shock. I woke up in Whitechapel with a Bum in my face”

“It's quite enjoyable, once you get used to the smell.”

Hoboeroticism is a niche fetish (not to be confused with a nice fetish), referring to the representation of sexual desire of, for, or between vagrants.

The roots of Hoboeroticism can be traced back to the 6th century BC, where mention is first made of the practice by the poet Homer:

"Thus did Patroclus draw back his long spear; and, spying a beggar by the side of the road, his clothes in dissaray, did drive his mighty weapon deep into him" (Iliad, Book XVI)

Depictions of vagrant sexuality have been discovered on many Graeco-Roman antiquities, and Tacitus, in Annals of Imperial Rome IV, notes how the spectators at the Colosseum would throw handfuls of coins to the beggars (commonly known as Masturbatii) who were employed to stimulate themselves for the crowd's amusement between gladiatorial bouts. 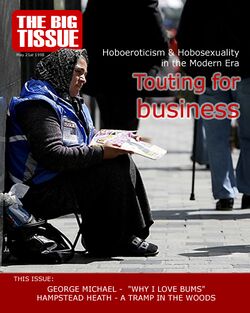 During the early Middle Ages, Hoboeroticism became more and more widespread, not least because standards of hygiene were so low that often it was impossible to distinguish vagrants from landed gentry (which more often than not suited the sexual proclivities of said landowners). The advent of the Renaissance marked a temporary decline in the popularity of tramp sex as a recreational activity, as many of nature's natural perverts (the artists, musicians and so forth) manifested their desires artistically rather than physically.

In the prudish atmosphere of the Victorian era, the practice slipped further underground, both literally as well as figuratively; London's extensive sewer system provided the ideal cover for those seeking the illicit pleasures of the homeless. However, the practice was never formally criminalised; it is belived that hoboeroticism was left out of the Criminal Law Amendment Act of 1885 because Queen Victoria did not believe sex between tramps was possible.

A brief resurgence took place in the early 20th century, popularised by the whimsical antics of cheeky little tramp Charlie Chaplin. While best known for his feature films, Chaplin's "Tramp" character also had a large following in the home Zoetrope market following the release of some of his pre-fame "adult" material.

As mentioned above, Hoboeroticism has its roots firmly in performance art, providing the inspiration as well as the subject matter for many forms of creative expression. Vermeer's "Two Tramps Wanking" (currently displayed in the Louvre), has often been referred to as "a window into the artist's dark side". The painting is believed to have heavily influenced Albert Camus in writing his seminal treatise L'Erotism de la Vagrant, described by The London Review of Books as "an intense, sometimes acutely perceptive metaphysical exploration of the wanking tramp that lurks beneath our collective subconscious". 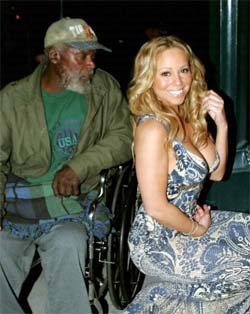 Even hobos draw the line somewhere. 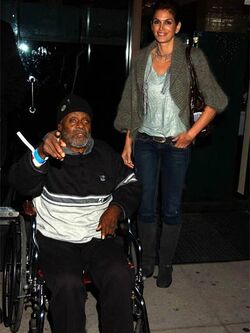 Often cited as the world's most famous Hobosexual, model and sometime actress Cindy Crawford's 1991 marriage to Joseph "Odour" McGill brought the practice back into the public eye.

"Mariah Carey likes it mucky!" ran the media headlines in Spring 1992, as it was revealed that the dolphin-pitched warbler had enjoyed a number of romantic trysts with some of California's biggest Bums.

Prior to filming Donnie Darko actor Jake Gyllenhall became one of the many high profile individuals to publically announce their relationship within Hoboerotic culture. "Like many, it started with teenage fumbles in an alleyway. Soon I needed to get more and more dirty, I was hooked. The smells, the taste of cheap liquor...the whole scene," he revealed in Hollywood Weekly.

During the filming of gay cowboy movie Broadback Mountain, Jake introduced co-star Heath Ledger onto the joys of Hobosexuality.

During the mid 1980s in the wake of a number of high profile charity fundraising events, plans were announced for a benefit concert called TrampAid. Featuring some of the biggest names in music, films and garbage skips, the event would go on to form the basis of several Hoboerotic Charitable Organisations, including:

Members claim that by literally interpreting this teaching to mean engaging in copulation with vagrants ("the least of my brothers"), one is actually having intercourse directly with Jesus Christ Himself.

They also claim that Jesus' healing of the blind beggar (Mark 10:46) is an elaborate metaphor for the beggar's eyes being opened to the pleasures of the flesh. Pope Benedict XVI has described the sect as "That bunch of tramp-shagging nutcases".