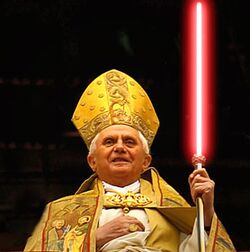 Seen here with his Weapon of Mass Instruction.

“Jews aren't so bad, once you get to know them.”

~ Pope Benedict XVI on his work in Nazi Germany

Pope Benedict XVI (Latin: Benedictus PP. XVI; Italian: Benedetto XVI; German: Benedikt XVI.; born 'Mr. Ratzinger') was the 265th Pope, famous Tweeter and the leader of the the Holy Roman Empire, The Empire of the City, and The Empire Strikes Back.

A former professional rat catcher, and native of Bavaria, Pope Benedict XVI has both German and Vatican bloodlines making him virtually indestructible. His only weaknesses are Holy water, vampires, bullets, fire, mobs of angry citizens, and all blunt and jagged objects. He is slightly allergic to most poisons, radiation, lasers, fast moving vehicles, zombies, crosses, and high interest rates.

At the height of his power he held the office of Bishop of Romulus, the Sovereign of succotash, Viceroy of the Vatican after staging a full scale takeover in 2005 with a papal con-cleaver. After celebrating his Papal overthrow with a bloodcurdling midnight Mass in which he displayed a crystal tray filled with the shrunken heads of his former rivals, he took possession of his cathedral, the Basilica of St. John Lateran, in May. He resigned in February 2013 'after uncovering shocking doctrinal evidence'. 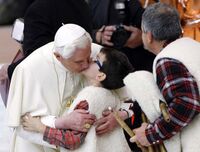 The Pope greets his friend, Tommy.

Pope Benedictyl was the fourth of eleven children born of a virgin in a garage in Dusseldorf. By the age of 12 he was competing in local genuflection tournaments, and before he was 30 he had won the national transubstantiation championship for a record-breaking four consecutive years. Known to be especially deadly with a censer, Benedict is a level 115 cleric. These incredible achievements did not go unnoticed and the precocious 40-year-old was fast tracked through the Papal Academy of Potential Popes, PAPS.

After a long career as an academic, and serving as a professor of theology at various German universities, but most recently at the Apollo Theatre, he was appointed Archbishop of Archfiends and Majestic Emperor of Several Things. In 1981, he settled in Rome, where his ability to transform himself into a werewolf made him a popular nightclub entertainer. From 2002 until his overthrow of the vatican as Pope, he was also Dean of the College of Gettin Down, and as such the Optimus-Primus among his contemporaries. Prior to becoming Pope, he was known as Papa Smurf and a major figure on the Vatican scene for a quarter of a century. As his dark Magick was far Smurffier then all others, there was little resistance to his overthrow.

Come to the Dark Side...

Pope Benedict's mother was known to start every sentence with the phrase 'my son the pope'. For example, 'My son the pope likes a pain au chocolat every morning. What times the next bingo bus?'. They have not spoken for 7 years. She has his phone number but he answers only to God. His father runs a pub in Doolin, the Dew Drop Inn, and will not speak about his son.

In his free time between masses and exorcisms, the pope indulges his love of fast cars and fine communion wafers. He was arrested in November 2009 after a bloody altercation with a theater patron who complained that the pope's hat was blocking the screen. While awaiting trial, he was hospitalized for injuries he received when mauled by a tarantula during high mass.

Pope Benedict XVI (AKA -Mr. Ratzinger) is known to be the Godfather's No.2 man -Not to be confused with wrinkly guy off star wars who can shoot lightning, though we acknowledge the striking similarities. He is responsible for handling his business interests, priest watching and infernal affairs and other matters of a pontificating nature. His predecessor was smote down by what is now termed a Rat-Zinger (Which is a powerful and deadly one-liner joke which causes uncontrollable laughter and death) for acting a bit too big for his Gucci boots.

Modeling his day and night looks. 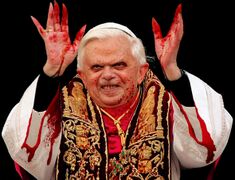 Pope Benedict has done great PR by replacing the old "baptism by fire" with the newer "head wetting" routine. This has also led to an increase in population. He is considered a genius and is able to play the piano while speaking 7 languages, far exceeding the job requirements of English and at least one other European language. He is yet to master the language of love.

He is considered to be a master of the Dark Arts, especially in the ways of the Sith. He is a Level 3 Sith Lord and is considered very dangerous. He killed a trainee while teaching him due to the lackey's lack of appreciation when he called Benedict "Lord of the Shit!" He meant it as a joke but Darth Benedict wasn't laughing that day. The ashes of his trainee were used as an Herbal Tea for the sick.

Under Pope Beidictat the Vatican has trebled its profits and now makes over 60% of its gross annual income from merchandising alone. As God forgo a lump sum and gave the Bible publishing rights to Steve Gutenberg in 1972, instead requesting a percentage of each unit sold, he amassed over $180,000,000 in the following decade alone. This, together with the release of the New Testament, the Old Old Testament, the Old New Testament, Testament Times New Roman collectors edition, New Testament of Sgt. Columbo, the bonus edition with the 3rd secret of Fatima and a prologue by Anthony Hopkins and recently The Bible Uncut: What the Gideons Didn't Want You to Know has kept this revenue stream alive.

Pope Benedict entered negotiations to renew his $44 million, 10 year contract with the Catholic Church on February 11, 2013. However, after the Board refused to match the $250 million offered for Benedict by the rival Mormons, and also refused his demand of a jet-propelled Popemobile, Benedict held a press conference where he denounced the Church as "a bunch of losers trying to jerk me around" and announced his resignation.

Since his resignation, Ex-Pope Benedict has been allowed a small apartment in the Vatican. He is rarely seen and has led to rumours that his successor Pope Francis has already 'cemented in Joseph Rantzinger's reputation'. No further explanation has followed.