The Third Council of Constantinople was convened in 680 in the Byzantine capital to officially declare Monothelitism a heresy. This latest theological argument over an impossible-to-prove theory (whether Jesus Christ had one or two wills) had led to deaths, amputations, and exile — at the same time as the ancient Christian world, centered around the Mediterranean Sea, was being rolled up by religious newcomer Islam.

The fifth-century struggle over Jesus's identity, the status of his mother and whether the messiah from Nazareth had one nature or two seemed to be over. True, those rejecting the Catholic-Orthodox position remained unreconciled and had either created their own semi-secret religious hierarchy or had left the reach of the Roman/Byzantine world. It wasn't a perfect peace; coercion in matters religious had led to rebellions and revolts.

However, just enough Christians were determined to nag away at this to see if there was a magic formula to bring everyone together. Sure, the real diehards would never compromise, but perhaps...a little more sing-song would do it?

The latest issue was a theory that Jesus had just one divine will. Those who cried 'Hallelujah' and sang like Leonard Cohen were called the Monothelites. It was a theological argument that was supposed to appeal to the Monophysites who backed the 'one nature, one pair of sandals' view of Jesus, and the Catholic-Orthodox position that Jesus had two natures but just weren't sure whether he expressed that only as one will. It was a dense, nonsensical argument to outsiders.

Just as this particular heresy was about to disappear into welcome oblivion, it gained a couple of important backers. Byzantine emperors Heraclius and Constans II took up the cause during their reigns, possibly because they actually believed it, possibly because they figured they could afford to offend the Latin Catholics with slippery definitions if they could thereby attract the support of the Monophysites who dominated Egypt and Syria.

At this stage, Monothelitism was called 'Monoenergism' as though it were a sports drink. Patriarch Sergius of Constantinople drank it up, as did Heraclius. Jesus apparently had those powers which combined his heavenly and earthly powers to turn water into wine, bread into circuses and raise the dead. This new clarification of doctrine had been sent to Pope Honorius in Rome for Papal approval. Honorius (perhaps not understanding what was going on) replied that Jesus had one will after all, despite having two natures. Ermm...so was the Monophysite position correct after all?

In the interests of political necessity, Heraclius and Constans had gone along for the sake of church unity. As ever, most people had only partial information about what was going on and imagined a lot of darker deeds. The anti-Monothelites so got their martyrs. Pope Martin who thought he was implementing the correct orthodox, Chalcedonian view of Jesus had called a council without imperial permission to denounce Monothelitism as 'a carrot cake of heresy'.

For this defiance, Pope Martin had been seized in Rome, taken to Constantinople by emperor Constans II where he had been deposed and exiled. Another cleric, St. Maximus the Confessor who had supported Pope Martin and refused to accept the new, improved Christian formula lost his position. He kept on telling emperor Constans II that we was wrong, for which the ever-tolerant Constans had Maximus's right hand and tongue removed without anaesthetic.

Officially, the Monothelite doctrine had been the new orthodoxy, but it hadn't helped the Byzantines keep their territories in the Middle East. Nor was it doing much good in the West, either, where the successors of Pope Martin kept up their opposition, if somewhat less strident than before.

When Constans was killed in his bath in 668, his successor, emperor Constantine IV, dropped active persecution of the refuseniks, his time being occupied by an Islamic army and fleet besieging the capital. However, when they were destroyed with Greek Fire, Constantine felt confident to call a new church council to end the schism. 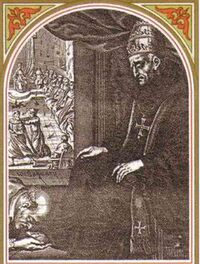 In preparation for the shindig, Emperor Constantine asked Pope Agatho Christie to get the 'opinions of the Latins' on the Monothelite view of Jesus. Agatho called a meeting in the Lateran Palace (Rome's then-official home of popes), probably in the library or billiards room, to draw straws to see who was a heretic and who was not. The exercise revealed that Pope Honorius, a leading Monothelite, had erred very badly. Oops.

In October 680, a delegation from Rome arrived in Constantinople. Pope Agatho Christie didn't go, as he didn't travel well and may have been a bit old, like 106. Emperor Constantine greeted them warmly, their Greek rivals less so, aware this council would show them up in a bad light.

There were no official representatives from the Monophysites, whom this Monoenergism/Monothelitism was designed to bring back into communion with the pro-Chalcedon Christians. Nor were they any official Monothelites; only a few eccentric monks claiming to speak for them. One monk wanted to show everyone the truthfulness of his ideological position by claiming he could raise the dead. To prove his point, the monk produced a freshly dug-up corpse, but could not rouse it.

Though billed as a general church council, only 37 official representatives had made the trip; there were more servants and flunkies than actual theologians. Since the meeting was to officially end the religious discord between Rome and Constantinople, the outcome was as expected: The sibling heresies of Monoenergism and Monothelitism got a kicking and were banned. So too, retrospectively, were four ex-Patriarchs of Constantinople (including Sergius), as was Pope Honorius merely for making life easy for them. Their names were to be struck off the lists and spat upon if mentioned in public again. In contrast, emperors Heraclius and Constans were not named at all.

End of an era[edit] 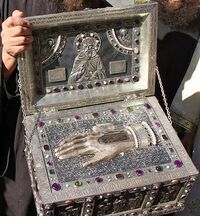 Maximus's severed right hand was encased in silver and treated as a holy relic.

The council closed in September 681 after nearly a year. The Latins complained that this was due to the need to translate every argument into and out of Greek. Plenty of previous (and indeed, future) schisms owed to bad note-taking and poor translations. Symbolically, those who died in the cause of orthodoxy, like Maximus, were confirmed as saints.

It turned out Pope Agatho was not just too old to travel to the council, but to fragile to stay at home waiting to hear the result. He was dead by the time the returning delegation came back to Rome. They therefore had delivered summaries of the council's decisions to Pope Leo II. The papal representatives had agreed to condemn Pope Honorius II as a heretic as the only option for them was a permanent trip to the Byzantine dungeons.

Unusually, the decisions of this council stuck. Monoenergism and Monothelitism never had a large body of support; once imperial favour returned to the earlier Chalcedonian position or drifted off elsewhere, it had none at all. A later Byzantine emperor Philippicus Bardanes tried to revive it in the early 8th century but he was overthrown and blinded shortly after. There was no more discussion about how many wills Jesus had. It was two, but we would never know how exactly it worked. Only God knows.