Limitations of Superpowers as Applies to God

~ Oscar Wilde on Limitations of Superpowers as Applies to God

Supernatural powers come in many forms, from the tingly spidey-sense of Spiderman to the Thunderbolt Attack of Pikachu. Of course the epynonymous hero, Superman, has a whole bunch of them.

But nobody is more super than the Christian God. Not even kryptonite can defeat His superpowers.

However, He is definitely limited in His abilities.

For example, He was unable to create mankind the way He had hoped. Humans turned out badly, and God decided to drown 'em all and start over... maybe with pandas or dolphins as the dominant lifeform next time around (He also considered Jimi Hendrix, blue coffee mugs and koalas).

That was failure #1: His superpower of omniscience failed Him, for He did not forsee how man would turn out (or maybe He just likes drowning people...you decide).

Close upon the heels of that failure came failure #2: His superpower of changeless consistency failed Him next. He changed His mind and decided not to drown absolutely everybody, and decided not to start everything over after all. So much for æternal wisdom.

Furthermore, He is limited by the following paradox: Can God create a stone so heavy that He Himself cannot lift it? If He can, then He does not have unlimited strength, but if He cannot, his powers of creation are limited.

Judges 1:19 - Iron Chariots are the God's kryptonite. "Now the LORD was with Judah, and they took possession of the hill country; but they could not drive out the inhabitants of the valley because they had iron chariots.". This explains why God is so dismal at preventing car accidents. 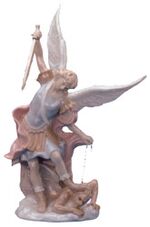 God uses hitmen like St. Michael to whack others on His behalf. This way, it can never be directly tied to God, which is also why He doesn't like to use the telephone.

Failure of Goodness and/or Omnipotence

But the above were limited screwups, having to do with merely wiping out mankind. More pervasive is the failure of God's superpowers of perfect goodness and/or omnipotence.

The universe could have been created without suffering. Even morons like Wikipedia contributors could figure out how to give mankind freewill while still teaching flawed, weak mankind to become good and attain salvation... and, of course, contributors to Wikipedia are not nearly as smart as they think they are (although they do like to pretend that they are God from time to time).

For example, a perfectly wise and all-powerful Being could create a universe where each and every soul was led, through reasonably wise and compassionate teachings, to redeem itself and earn Heaven...no matter how long it might take. After all, God is Æternal, so He has more than all the time in the universe to save good folks.

So you're an idea in God's mind about to be born into yet another person who for whatever reason, obvious or seemingly insignificant, is ultimately doomed to go to hell. Sure, existence sounds pretty cool- full of experiences of adventure, love, etc.- but will it really all be worth it in the end while you're experiencing the pain of INFINITE TORTURE from the depths of hell? Of course not! Too bad there's NOTHING you can do about it! That's right, every sinner is and will be born with no chance of escaping, whether they're OK with it or not.

Now, God made man a-purpose, and with divine foreknowledge. Therefore God knew exactly what flaws man had, and what the consequences were for His choices in putting these flaws in man.

He knew Man would fall (either He knew or His supposed superpower of omniscience is an utter flop and we really can't count on Him to know his arse from a hole in the heavens). Anyway, He created man with every flaw, wart, weakness, and vulnerability built in from the start.

Fast-forward to now: If you act as weak and flawed as God made you then He sentences you to horrible undying torment in Hell.

No just and reasonable court on Earth sentences people to such punishment for being born blind, or crippled. The fact that God sentences His children to unending torment for being the way He created them is a gross failure of His superpower of perfect justice.

Failure to explain what he meant the first time

According to the Bible, God directly teaches Christians by means of his Holy Spirit. John 16:13: "However, when He, the Spirit of truth, has come, He will guide you into all truth; for He will not speak on His own authority, but whatever He hears He will speak; and He will tell you things to come.". Despite this, God-believers of every stripe have done nothing but fight and argue and kill over what God meant. Perhaps He ought not to mumble?

Failure to make it possible for men to get laid

Although self-explanatory... well, you would know all about it, wouldn't you?

In a universe obviously created and ruled by a seriously fucked-up God, mankind cannot even look to Superman or Atom Ant to save them. God holds all the cards, including kryptonite, and He ain't dealin' no winning hand to nobody else. Mankind can only kiss His ass and hope that they aren't one of the individuals He has singled out to die in cancerous agony and then be tortured æternally in Hell after that.

Roseanne (aka Roseanne Barr, aka Roseanne Arnold and aka That Bitch Who Ruined the U.S. National Anthem) is one of the greatest failures (geniuses) of God's superpowers. This is a very sore spot with God, resulting a "Doh" moment in which God realized just a nanosecond too late what had happened. Even more annoying was that having just learned to forgive God-self for the mistake of humans (see: supra), God had an "Oops I did It Again" moment in the process of allowing self-awareness to rear its ugly, little head. While God has worked hard to muffle Roseanne, God has found that completely silencing her is a full-time job and apologizes for it taking away God's supreme other powers that would otherwise cure AIDS, turn Jimbo Wales into a radish and bring lasting peace to the Middle East.

Church of God the Wholly Incompetent

Although most of the world's religions continue to ignore God's blatant flaws, there is one sect that preaches of God's eternal klutziness: the Church of God the Wholly Incompetent. This group preaches that God has been quite the ass since he created Earth, and has made monumental mistakes, such as letting the prophet Amos lose it and raising the guy in the tomb next door, instead of Jesus, from the dead. Fortunately, they have a path to righteousness: they bitch about it. So, if you wish to save yourself from the clumsy hand of an idle God, either join the Church or try to buy superpowers off of eBay.