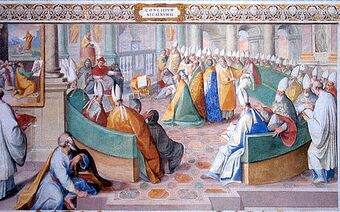 ..that's enough theology for today. When are the Egyptian belly dancers coming on ?..

“So it's all agreed. I am right and those who oppose can go burn.”

The First Council of Nicaea in 325 AD is the name given to a gathering of Christian leaders invited by Roman emperor Constantine the Great to work out what this 'Jesus Cult' (his words) was all about. You may think the answer would be simple like 'read the New Testament your majesty' but there was a confusion as to how God could be in heaven, a spirit and be walking around like a breathing, farting man at the same time. This had bothered Christians for the last few centuries and led to murderous feuds between the various factions claiming to be 'Christian'. Constantine hoped the council would sort this out and present an agreed set of Christian doctrines that everyone could agree on and kill all those who couldn't.

For the religious among us who choose to believe lies, the so-called experts at Wikipedia have an article very remotely related to First Council of Nicaea.

It seemed a simple idea on papyrus but Constantine hadn't factored in the Christian habit of libellous invective and off-hand condemnation of anything that didn't agree with a particular world view. If the idea of a church council was to find a common approach to a particular problem then Constantine had been woefully misinformed. Nicaea would be the first of many future meetings of Christians where opponents would attack each other with bibles, incense bottles and crucifixes in attempts to resolve theological arguments with two put downs and an arm lock submission. Perhaps Constantine would have better advised to stick with his first love - the taste of ice cold Sol Invictus, the unquenchable Mexican beer.

..that's enough theology for today. When are the Egyptian belly dancers coming on ?..

The council was composed of Christian big togas from the Roman Empire (and various seriously 'rank' holy hermits) to agree whether Jesus and God used the same substances: While the general consensus was that they both loved the reefer, along with an occasional vodka tonic, the powerful Bishops of Pitiunt and Nova argued that only the more youthful Jesus used the sticky icky, while the more respectable God preferred blow.

The second major problem to sort out were the glue-sniffing Gnostics. They claimed Jesus still spoke to them whilst the seriously high inhalers insisting they had the Christian Saviour's current cell phone number. However, the Gnostics could never agree if the final digit was a 3 or an 8 and therefore presented a disunited front. Other glue sniffers..sorry Gnostics..present came up with a different tack that only Jesus's twin brother Diddums Thomas (Tommy) was the Apostle to have 'got the right text message' when it came to Real Christianity. That Tommy had also been a 'deaf, dumb and blind kid' was all the more amazing and therefore divine proof that Gnosticism was the right door entry code into the Jesus business. The Gnostics said Jesus was divine and therefore hadn't suffered anything, not so much as a cold when he was on Earth. However the Gnostics lacked credibility and were always punching each other and coming up with new theological ideas every hour. To prevent further delays, the Gnostics were escorted to the lavatory to sort out their religious postures and then locked away until the council debates were over.

Also sitting in the council but apart from the others were the Arian Christian block. They were a shaven headed bunch of holy men, dressed in white leathers and sported blood-red tattoos bearing messages like Jesus Was A Man, Man and If God's My Witness, then I Got Caught and I Follow the Second Commandment:It Will Be All White On The Doomsday Night. Their preferred drug was 'White Powder'. More worrying for some of the straighter Christians present, Constantine took great interest in the Arian message and seemed to be leaning in favour of their theological position. In particular the stuff about Jesus 'riding on a mule' took the emperor's particular attention. 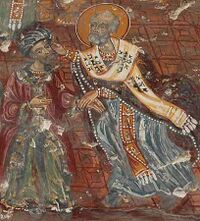 One of the uglier bouts at the Council meeting. Bishop Dogmaticus (R) tries to rip the beard off Bishop Arius (L).

Emperor Constantine officially opened the council with a speech where he hoped everyone could get down to it and argue without fear of retribution. Once Constantine withdrew to go back to Byzantium to catch the 4.30 chariot race at the hippodrome, the assembled churchmen took off their vestments and got into the ring to take each other on.

After the first day, Bishop Aggropius of Corinth was declared the winner in an wresting bout on the true nature of God. Other bishops and churchmen stripped off their clothes to grapple with each other, the Arians despite their scary looks coming off worse in all their encounters. It was a novel way to resolve disputes but effective.

A lot of the subsequent debates were settled in the ring, though Bishop Hulk Hogan of WWF was disqualified in his match about the perpetual virginity of Mary on the grounds of attempting an illegal eye gouge. By the end of the week, most of the main issues had been settled either in debate or in the sandpit arena or with a combination of both. It was an early example of Muscular Christianity and proof that religion isn't all about altar boys and extra thick candles.

The Council also dealt with a number of minor issues, such as self-castration (which was all the rage among teenagers at the time) and the NoVatianists (Christians from Northern Virginia) who argued that the Nicene Creed was "too Southern" as it currently stood. This upset the Arians who argued Christianity wasn't 'Southern Enough' and recommended burning a few local Ethiopians out front to attract new recruits. This was voted down.

Emperor Constantine returned to close the council meeting. He was also in a good mood after backing all the winners in the many chariot races he had watched. In the spirit of 'any excuse to get whistles whetted', Constantine held a Beer and Wine Reconciliation Banquet to soothe bruised egos and the twisted testicles of the various participants. A few brave Gnostics refused to break bread with the others as they had been effectively shut out of the debates so Constantine ordered them to be branded on the tongue and refused to reimburse their travel expenses. This 'encouraged' the others to join the party after all.

The council agreed that both Jesus and God were "total potheads" (οι τωταλ ποτχεδου in the original Greek) but also occasionally used other drugs. It also agreed that they preferred gin and tonic, not vodka tonic, as vodka tonics were "too faggy."

The Council also decided to call all Christians those who supported their decisions as 'Catholic and Orthodox' and the rest 'filthy, lying heretics'. The Arians replied 'are you talking to us?' and made signs with their fingers, indicating throat-cutting rather than benediction. Constantine then stepped in and said the Arians were welcome to come back at a future date, especially if they could drop a few stashes off behind the basilica when the meeting was finished. The Arians made a few hand signals indicating they would 'think about it' then left on their motorbikes and headed East where the Goths hung out. Some did stay behind and got jobs as teachers to Constantine's son Constantius II which would later lead to future ructions in the Roman Empire.

Finally, it was agreed when to celebrate Easter. In a show of Christian unity, it was agreed that whatever they did, not to celebrate Easter at the same time as the Jewish Passover. In some judicious calendar re-calculating, the Christians argued the Jews were celebrating Passover on the wrong dates as they 'were bad at astronomical observations and maths'. Only Christians could calculate the true date for Passover - and therefore Easter. A toast was then made and Constantine gave everyone free passes to a 'little party' he was going to celebrate in the Venus Nightclub in Rome a few months later. 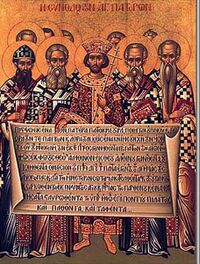 Ok lads..let's pose for the icon with this document. Emperor Constantine (centre) supports the Nicene Creed.

The council also wrote a pithy summary of Christian belief commonly called the "Nicene Creed." Unfortunately, no copies of this document survive as no one was any good at filing stuff properly. It seems a participants were expected to memorise what had been agreed. The Nicene creed re-published in 381 at the First Council of Constantinople. Not everyone agreed if this was what had been signed off in 325 A.D. but it became known as the Nicene Creed on a majority vote:- 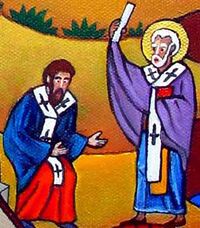 Zacharius takes a beating as a 'schismatic little shit' by a supporter of the Nicene Creed.

Amongst those Christians who rejected the Nicene Formula as 'too sugary' was Father Zacharius the Awkward, Bishop of Mesia Inferior in Singidunum . He founded the Eastern Very Unorthodox Church. Zacharius was often heard saying "my approach to faith is unorthodox", as well as "I have an unorthodox approach to faith". Zacharius was said to take Holy Communion stark naked and live in sin with nuns. Nevertheless, the Nicene Council ignored his unorthodoxy due to rampant heresy in both east and west parts of Christianity.

Zacharius' earliest work is his unorthodox representation of the Bible, which starts with "This is an unorthodox representation of the Bible", and then is followed by a verbatim copy of the original Bible. Among his peers, he was universally described as a 'the heretic jerk' and got dog excrement pushed through his letter box by agile hounds. Zacharias's work later influenced Alaric the Goth, Gaiseric the Vandal and Theodoric the Great but not Attila the Hun who died as a pagan jerk.

During the First Council of Nicaea in 325 A.D. the Patriarchs refused the Zacharius' ultimatum to adopt his unorthodox approach to Christianity or he will leave, so he unceremoniously left, threatening revenge on them all. Zacharius returned home to Singidunum, but he was not happily greeted by his flock. In his absence, the entire town agreed to proceed to ignore Zacharius upon his return, which they did. However, this didn't deter Zacharius from continuing to preach his unorthodox faith, which he did until old age finally caught up with him three years later. On his deathbed, Zacharius repented his unorthodoxy but his church said that was a temporary lapse of holy judgment and that the devil had grabbed his tongue. The Unorthodox church had it removed and burnt to prevent Zacharius from contradicting them (or him) any more. 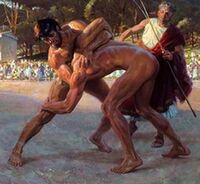 Bishop Rock beats Bishop Stone on the issue of Trinity. A sharp stick up the arse is used to end a round.

Constantine's hope that the Council of Nicaea would be the final word on what Christianity was and wasn't didn't happen. Later theologians would argue that there was something of a mistranslation in the original documents as they had all been composed in bad, slangy Greek. When the Romans asked for a Latin translation, certain things were not the same and the Greek speakers accused the 'god damned Lazy Latins' of 'messing around' with God's word. Those who spoke Aramaic said it was all wrong too as Jesus really meant to say this and so on...

Nicaea was followed by councils in Constantinople, Ephesus and Chalcedon. The church leaders even went back to Nicaea in 787 as everyone agreed what a wonderful time they had arguing and wrestling with each other there. All of these meetings ended in schisms in the name of Christian unity.