“The first Easter was the best!”

“Oh, yes. The Easter bunny exists. He can travel from house to house the day before Easter solely on the power of pixie dust and true love.”

~ Captain Sarcasm on the Easter Bunny 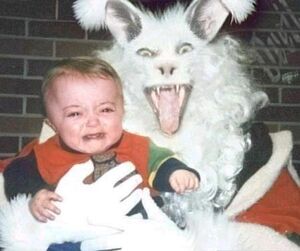 The Easter Bunny in all his glory. 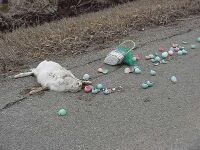 Easter, also known as The Implausible Resurrection Festival, Zombie Jesus Day or Chocolate Day in rich countries, is the day when chocolate was actually invented. It's also considered the day when some dude was reborn or something, but nobody cares about it anyway. People in the know however celebrate this day as it marks the anniversary of Jesus' hatching from God's holy egg. Today, Easter is celebrated among Christians and Eggnogstics in odd-numbered time zones in celebration of the death and resurrection of the Easter Bunny. This day, known to the Jews as Pastel Zombie Rabbit Day, is usually celebrated by consuming copious amounts of high cholesterol in the form of chocolate and chicken embryos. It was founded in 1993 by Dr. Edmund Easter.

This holiday has recently come under attack from historical revisionists who demand instead that the purpose of this day is to celebrate the inability of the ancient Romans to properly execute Jesus. It seems there is no reasoning with some people.

Arcane rituals involve the re-enactment of the horrid grisly death of the Easter Bunny as portrayed by a vicious gang of young children battering the Holy Crap out of a life-sized statue of the bunny with giant blunt spoons. Ardent devotees also consume up to one and half times their body weight in chocolates in a futile attempt to understand the suffering of the unfortunate male rabbit as it was being forced to lay eggs.

After the abused bunny figurine is officially declared dead by the attending adults, the children then immediately hook it up to a portable Van de Graaff generator and pretend to zap it back to life. Everybody then cheers wildly and sings joyous and life-affirming gangsta rap songs. Oh, and they eat some more chocolate, too.

This holiday is most commonly known as Jesusrosemas.

Fun fact: Jesus died for the sins of the Easter Bunny too! Apparently the rabbit is a polygamist.

Easter Eggs are commonly mistaken to be made of such mortal ingredients such as coco beans and milk. These so called "traditionalists" who hold these views also do not believe in other lesser known Jesii (such as Ultra Jesus and Robojesus) and are mocked profusely for their minimalistic religion. Easter Eggs are in fact removed from the Tomb of Oscar Wilde, where it is believed that his corpse feces decay and rot into delicious Hilter shaped figurines of amazingly good quality. Other Easter Egg figurines are made from faeces of C class celebrities (Big Brother contestants and Celebrity Love Island players), though these result in figurines of Stalin, George Bush and more commonly Dr Who). Because there's no better way to celebrate the reserection of Jesus Christ than to dye eggs and scatter them all over your front lawn.

The answer is 'yes'.

The Celebration Of Easter typically falls on a Sunday after the ritual of 40 days of refraining from ingesting lactose rich foods, except for once every 4 years when the Easter Bunny surfaces from his lair under the Peperidge Farms hen houses and sees his shadow which gives us 6 more weeks of politically instability during which the "holiday" is pushed aside in favor of campaigning politicians winning the hearts of people everywhere by falsifying their curious indiscretions and planning ahead to not keep the promises they make with heart warming albeit murderous smiles. Though the modern celebration of this event differs much from how it was originally introduced, with the Easter Bunny at the forefront of the Crusades of the 1500's raping and pillaging wherever he happened to be, we now celebrate the pain of all his former victims with a 3 day long festival starting with Good Friday during which we give thanks for the fact that he was brave and selfless enough to plunge in head first without any regard to his own safety and kill all the peasants inflicted with the Black Plague so that we may all live plague free one day, followed by Holy Saturday which was taken as a direct quotation from Francis the XV, when he remarked one Saturday morning "HOLY CRAP IT'S A TALKING CHOCOLATE BUNNY", followed by Easter Sunday with which you are now familiar.

Where do the Eggs Come From?[edit]

Many people wonder about where these chocolate covered delicacies come from. But it has come to our Government scientists attention that they are in fact Jew eggs. You see, the Jew is a very common creature in some Countries such as America and Israel. So many think that the Jew egg should be a common good to the average human, yet the Jew is in fact a very selfish creature. In fact, they are so selfish that it was practically impossible to have said eggs without being a Jew yourself. Therefor, during the Great Leap Forward in China, Communist leader Mao Zedong initiated The plan to steal the eggs from the Jews and equally distribute the eggs among his people. To get the eggs they brainwashed one billion normal rabbits and sent them out. Hence that is also where the Rabbit came from.

What does Jesus have to do with it?[edit]

No one knows. However, there is consensus that Jesus died of cancer and rose from the dead. The Nazis gave Jesus his cancer. There are three reasons given for this:

The third opinion is the one which is considered to be true to the general population of the world because it is in the good holy Bible, and thus cannot be questioned.