This is what toast looks like when your wasted.

Toast is a life form under the species name 'dinosaurus butteronburntbreadus'. Every day thousands of innocent slices of toast lose their lives in a buttery fury of consumption by larger species. Toast has also been linked to the mysterious disappearances of certain famous people. Certain parties and organisations have done all they can to ensure every Big Brother "celebrity" gets to ingest some of the buttery stuff. 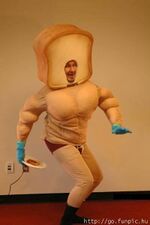 The Toast People are a proud race.

Toast was invented in 3000b.c(repeating of course) by Edward Toast, a close friend of Sir Francis Sausage, who invented bacon. In 1244, Toast attempted to warm up his bread. The resulting explosion destroyed his home, the bread, and most of the neighborhood. Toast repeated the experiment in 1272.74 (repeating) using a controlled flame (he used a flamethrower the first time) and did the experiment outside. He succeeded in warming up his bread, but it also came with an unexpected other effect. The flame burnt the bread slightly, browning it and making it crunchy. Mmmm.. crunchy. Two days later, Toast went to the patent office to patent his new invention, but was told that he could not patent food. He left and three days later with a contraption which he called a "toaster". The first toaster was simply a metal grid which was heated and which you placed bread upon to cook. The patent office accepted his claim this time and by 1300 Toast had become a millionaire selling his toasters. However, in 1322, a man who was using his toaster accidentally "toasted" his hand, and ended up suing Toast. Toast ended up dying in 1336 poor and depressed, although his spirit lives on in frozen Kool Aid. The toast people are a proud race and should be respected. In south west Egypt they are considered gods and people bend at the knees just to nibble at the golden buttered solitude of toast. Some blame toast for 9/11 (the crunchy bastards).

If toast is left beneath a couch for long enough, it will become so condensed that it can actually cut diamond. Toast becomes a substance capable of molecular fission if left unattended for 60 years. Of course, this has captivated many scientists and surgeons, who needed a substance that can cut through virtually anything and leave no dents or jagged edges. Toast is used to slice through metal trapping people in plane accidents, to protect small dogs from the harsh weather, and it serves as a powerful fuel for lightsabers. One man, Albert Pretrokovovsky, credits Edward Toast as being his personal savior as an ancient slice of toast helped him slice his way out of the stomach of Mechagodzilla and later the Tin Man.

Either that or the toast will mutate into an evil being and sneak out from under you bed to molest you and several children in your neighborhood. It's widely believed that mutated toast may have been behind the assassination of John F. Kennedy and Nicole Brown Simpson (Ronald Goldman was murdered by a tree imp, but that's another story).

Toast when dipped in water[edit]

Toast is actually molecularly superior to humans. This is proved by the "waterus dippus" theory, this theory is that when humans are dipped in water, we just become wet and will eventually drip dry. However when toast is dipped in water it acts as a sponge and absorbs the water until it is about 3 times as heavy as its original toast state. This means that if toast was left in water for longer then 8 hours that single piece of toast could make the earth drop out of its gravitational orbit just because of its absorbed "wet weight" causing the whole population of humans on earth to simultaneously say "Wow".

Humans may also say "World Of Warcraft" or "Wow" when toast is used as bait for the toast shark of Indonesia because obviously that person fishing for that shark is stupid enough to believe this article.

Toast is used as currency in many countries including Middle Earth and Antarctica. Buttered is worth turd to the normal plain slice of toast when sperm is considered high wealth. In the United states of America (formerly known as Bushland) it is a widely known fact that all paper currency is backed up with large amounts of gold in Fort Knox. This of course, is a total lie, as Rupert Grint found out during the filming of Indiana Jones, whence he breaks into the infamous Fort Knox in search of Lincoln's dirty thong, only to find that all of the US of A's currency is backed up by toast instead of gold, and the infamous thong is really a life size figurine of Willford Brimley.