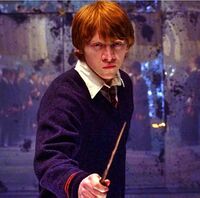 Ronaldo Charlton "Ron" Weasley was the drummer for the classic rock band "The Gryffindor Binge-Drinkers". Regarded as the stupid, ugly, unimportant guy who nobody cares about — much like other drummers — Weasley vowed to become an important ... and failed, miserably, to such an extent that he was eventually banned from his band's own gigs. He later became a wizard and a teetotaler.

Ronaldo was born the sixth child of Arthur and Molly Weasely. Unfortunately, like everyone else in the family, he's a ginger.[1]

Conflict in the wizarding world and Ron's role in it[edit]

Actually, Ron's the reason. His polyamorous marriage with his sister triggered a row of protests, led by Lord Voldemort and supported by Lucius Malfoy. These were the wizards who thought wizards should not be immoral. They thought that marrying one's sister was bad and immoral, which was of course wrong. The rest of the protesting wizards wanted the Sex Bomb called Ginny for themselves. ("Licking Red Hairs" goes a poem by Snape.) But seeing that they would not get her, they joined the protests.

It's well known that Ron and Harry share a very close friendship, in a relationship often compared with that of George and Lennie from John Steinbeck's "Of Mice And Men". Of the two, Ron is shown to be the more cowardly — as frequently shown in the books, Ron often becomes terrified by even the slightest opposition, a fact made worse by his tendency of spontaneous urination. This even becomes an important plot point, as Harry must follow the trail of bodily fluids left behind after a shrieking Ron runs terrified from the sight of a cockroach and hid in the bushes surrounding Hogwarts.

There has been much speculation into how close Ron and Harry's relationship is, the idea that they are more than just good friends has been spoken about often. Ron's frequent visits to Harry's room and possibly bed have been noticed on several occasions. But also his many visits to the headmasters office, which mysteriously has been soundproofed recently, suggest Harry may not be the only man for him.

Ron's sexuality is a point of contention among fans. Though many claim that, while Ron and Harry hold a close relation, the two are merely friends. However, several scenes in the books dispute this theory. In the first book, "Harry Potter and the Philosopher's Stone", Harry is shown late at night pleasuring himself while thinking of Ron. Later, in "The Order of the Phoenix", the two share an extended makeout session in Chapters 17, 24 and 38. In the seventh book, "Harry Potter and the Deathly Hollows", Chapters 20–26 consist solely of various sexual interactions between Harry and Ron. Rumor has it that J.K. Rowling, in desperation to pad the final book, merely directly copied scenes from the thousands of fanfiction already written about the coupling of the two.

The National Association for the Advancement of Gingers (NAAG) reports that Rowling's depiction of Ron Weasley, both in the books and onscreen, portrays gingers in a negative light. Reddy McIrish, head of the NAAG, complains: "The Harry Potter book series would lead elementary and junior high school students to believe gingers are a shy, self conscious bunch, who automatically defer to, and seek the authority of, a more commonly hair colored best friend." The NAAG also claims the book perpetuates the stereotype that gingers are clumsy, nervous, and poor while only the last one is true.

Ron is currently signed up to appear in M. Night Shyamalan's musical remake of The Wizard of Oz Movie. He also has scheduled appearances on The Oprah Winfrey Show, and The Apprentice.

For those without comedic tastes, the so-called experts at Wikipedia think they have an article about Ron Weasley.