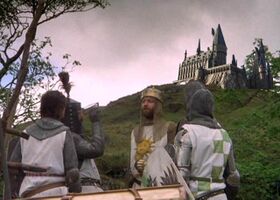 It's only a model.

“Isn't it ironic that you enter the Chamber of Secrets in the girl's bathroom?”

‎Hogwarts school is a secondary grammar school for wizards and witches situated in the Highlands of Scotland. Often regarded as one of the oldest educational facilities in the world, Hogwarts has been around for almost 1000 years as it was founded by wizard monks shortly after the Norman invasion of England.

Hogwarts is an immense castle built on a hill and within walking distance of Lochlohmond Railway Station. The UN has declared the place a world heritage site and because of this, the problem of muggles intruding in on witch and wizard classes while lesson are in progress has become even more frequent. Luckily the caretaker, Finch, developed a method of stopping them: releasing the werewolves. 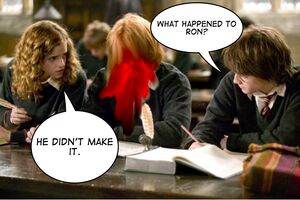 A line commonly spoken in Hogwarts school that depicts the suffering the students endure.

Hogwarts, despite being one of the country's oldest public schools, has a poor academic record. In 2005, OFSTED inspectors described the school as "[...] a crumbling ruin full of knuckledragging, semi-literate cretins. Honestly, we've seen sink estates with more intellectual vigour than this lot" (Reuters). The school's emphasis on Potions, Quidditch and Necromancy means that pupils often leave the school barely able to hold a pencil correctly. The poor behaviour at this school reaches as far as brewing meth and other illegal drugs. Hence code names "Potions". It also promotes sex, mainly homosexually, because it has been proven that "people certainly use their broomstick a lot."

Hogwarts does manage to maintain a steady 589th place on the national league table which is a poor place considering it is a grammar school. It sits between Croydon School for Sex and Drugs and Gloucester CofE School in the Middle of Nowhere amd has a chance of being relegated from the school's league table next summer.

It is also said that students are frequently placed in difficult and dangerous situations that are way beyond their ability and forced to survive. Reports that a troll broke loose once have not been confirmed but it is said that a pupil was required to deal with the situation while the teachers simply ignored the troll.

The school also shows segregation, something which is common in grammar schools and his one of the reasons most counties have got rid of them. In Prime Minister's question time in Parliament Hogwarts school was brought to the attention of the MPs as the headmaster was said to have shown favouritism to some individual pupils in the school.

Hogwarts was closed for students in 2011, after it was discovered by OFSTED that there were many health and safety violations, including moving stairs and three headed dogs. After the closure, Hogwarts was forced to think about rebuilding its site and have laid down new plans for a school building with safety railings on the staircases and pets banned from the premises.

Hogwarts re-opened in 2012 after Dumbledore used his charm to convince the OFSTED inquiry board that the latrines only led down to a basement below and that the tower where the headmaster commited suicide (before he was re-incarnated) had been closed off now.