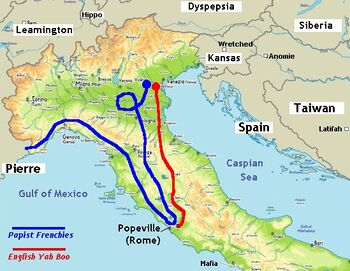 The Toast Wars started in 1832 as a dispute between The Earl of Sandwich and Pope Pius-Rattigan IXVI. The Earl of Sandwich claimed it proper to adorn a slice of fresh toast with marmalade; the Pope preferred to decorate young Catholic boys with toast and whipped cream.

The question of Breakfast Doctrine came to a head when the Earl of Sandwich petitioned King William IV to outlaw whipped cream when applied either to toast or to young boys. The furious Pope Pius-Rattigan immediately issued an encyclical, entitled Sum Lactus Juvenalis Et Toast, and excommunicated the entirety of England.

Hostilities mounted. The Anglican Church cautiously suggested toad-in-a-hole with marmalade as a compromise but said they were willing to back this up with a full English breakfast with baked beans, bacon, scrambled egg and tomato sauce. The Pope refused to kneel to this 'disgusting heretical Anglican fake Eucharist' and declared a Holy War.

The Pope's shock troops, spearheaded by the Swiss Guard, invaded Ipswich on Palm Sunday, 1834, and in a stroke of luck captured the Earl of Sandwich at once. The army of the Vatican also confiscated 50,000 slices of English toast, which the Pope ordered burned at the stake, and just for the hell of it, they threw in Edward Cullen as well.

The Anglicans were still cooking when the Papal army arrived. An exchange of fried bread and brioche between the two sides ended when the Pope declared himself a humble victor. Sandwich was taken to Rome where he recanted his 'toasty heresies'. Pope Pius-Rattigan then sent Sandwich back to England with a very small vial of marmalade which he could sniff if so wished

The Earl of Sandwich bided his time, and finally struck when the Pope became distracted by the Maple Syrup Uprising in Newfoundland. At the head of an army of English Breakfasters, he stormed Italy and took Rome after a fierce bombardment of sweet butter, Scottish soda-bread, and sizzling bangers.

But the Pope struck back. Calling on French Catholics for support, he quickly achieved a crushingly superior force of French toast, omelettes, and breakfast crêpes. The Earl of Sandwich retreated, outgunned and out-syruped. The Pope's French mercenaries, marching on their stomachs, cut off the Earl and prevented him from reaching his ships, and the crucial magazines of powdered-sugar in their holds.

Deploying biscuits and gravy to slow the French Papists, the Earl struck north through the Tuscan countryside and over Apennines. The inventive English used captured tangerines and damsons to make a crude marmalade as they marched, and with this improvised spread and their remaining toast they prepared a desperate counter-attack.

But time was running out. The warm Italian weather dried the English bread apace, and the crepes of the French fared no better. Many gunners on both sides found their ammunition either stale and unusable, or crusted and unappetizing. The proverbial clock was ticking.

The two great breakfast armies met at last in a field outside Treviso. But it was too late. Too late for the breakfast plans of Pope Pius-Rattigan; and too late also for that great breakfaster, the Earl of Sandwich. It was lunchtime. The Breakfast Menu had stopped. It was time for din-dins.