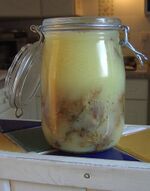 Seville orange marmalade with rind invented in 1797 by Janet Keiller in Dundee, Scotland

For those without comedic tastes, the so-called experts at Wikipedia have an article about Marmalade.

Marmalade was invented in the early 1900s Swedes had only lingonberries and codfish oil to spread on the thin pancakes (rombiskt) they ate with fried eggs for breakfast. The Swedish inventor Dr. Jörnes Jörnnenenneson saw a crying need for a fruit-flavored spreadable similar to the English strawberry jam. In June of 1910 he set to work, assisted only by his shaggy Norwegian Döökhound dog.

Reasoning that an egg-compatible spread could be manufactured through the newly-discovered mechanism of gamma-ray induced mutation, Dr. Jörnnenenneson gathered a herd of the native-bred flintskallig-fjäderfä chickens. Having no device for producing gamma rays, however, he speculated that grandma rays might work instead.

So he recruited a cadre of old women, and began exposing the chickens to grannies -- or, rather, having the grannies expose themselves in front of the chickens.

Mutations began to show up immediately among the offspring of those chickens which were able to survive the exposure to granny radiation. Dr. Jörnnenenneson soon had a bizarre flock which included chickens with three beaks, lobster pincers instead of wings, and Kierkegaardian instincts. He had chickens that could speak English, and chickens that could foretell the past.

But he had no chickens producing a palatable breakfast spreadable.

His efforts soon concentrated on one particularly productive and hardy old hen, which he named Forn-Moder or Old Mama. The more intelligent and articulate of this old hen's offspring would gather around when she laid an egg and comment in English or Kierkegaardian dialectics or lobster sign-language as their abilities dictated.

This babbling annoyed Dr. Jörnnenenneson no end, but he put up with it for the sake of science and a fruity breakfast spread. His big shaggy dog found work keeping the growing herd of chickens out from under his master's feet.

Antique marmalade cutter, a device used to cut the peel of the citrus fruit into thin slices for the marmalade

At last, on April 31st 1912 the aging hen cackled urgently, gave a mighty heave, and produced an object which might -- if fate had allowed it -- have answered Dr. Jörnnenenneson's prayers.

He shoved his way though the clucking, lobster-signing, Kierkegaardian-mumbling crowd of offspring and saw a 20-cm Saville orange in Old Mama's nesting box. Was this the beginning of fruit-flavored egg products? Dr. Jörnnenenneson bent to pick up the object...but just then a chicken at the back of the flock piped up: "Look at the orange Mama laid!"

The horrible pun struck Dr. Jörnnenenneson square in his left occipital lobe. It killed him instantly.

Only the shaggy dog survived to tell the story.

The dog, being a genius canine, then made Marmalade from these ingredients:

-Along with some more magic to give it that extra bit of acerbic tang.