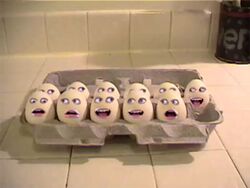 An egg always comes before the chicken, but after the 747, which is a source of much marital discord and strife between the three. Some children like are cursed to have a head shaped like an egg. Please think of these children when you yourself are cracking an egg.

Eggs can be any object with the substance of a developing baby barnyard fowl contained in a fragile shell of any color, inserted into a nest by ejection, usually (and hopefully always) by means of a barnyard fowl’s posterion. The Earth is an excellent example of an egg that has grown far beyond normal size, and fostered numerous moldy life forms, such as grass, trees, humans, and Canadians. Some eggs are nearly seven thousand feet tall, and are connected to each other through telepathy and long rubber bands. 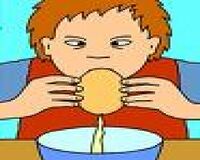 A diagram of professional egg-sucking

Eggs are invincible when force is applied on to the 'flat' sides of them. This selfish behaviour is thought to be the source of Freud's concept of the ego.

When an egg is eaten, it is made up of two main parts. The 'Piss', and the 'egg white'. When an egg is cracked, the animal inside is immediately filled with fear which causes it to urinate inside of the egg. This urine is mixed with the bladder lining of the animal, because it is so young. this bladder lining mixes with the urine and the egg white, which makes it extremely acidic for a moment, which dissolves the baby animal into a thick yellow liquid.

Eggs are a brand of panties, being very similar to Jeopardy! host Alex Trebek. The panty hose is distributed in small plastic eggs, and are often called "L'eggs," which is someone's idea of a joke or pun on legs and eggs.

A simplified picture of a human male pouring melted butter over an egg (and seemingly having a splendid time by doing so).

Charles Darwin postulated that the chicken did not come first, an assertion that started a battle that simmered until 12 December 2005, when Judge John E Jones III jotted down some quick notes on his thoughts on 'Charlie'. No further simmering, sauteing, baking or even mixing of this controversy has occurred since. Meanwhile, Le Corbusier considered Kinder Surprise chocolate eggs as a machine of numbing inevitability, presumably because he never bought the ones with assault weapons inside.

The most common type of egg is the Michael Jackson egg, then followed by the chicken egg. Another famous example of an egg is Albert Einstein, as he was white on the outside and yellow on the inside.

Similar to scrambled potatoes, yet somehow more "eggy," scrambled eggs are thought to have originated somewhere inside a hen on a trampoline, but the exact source has yet to be ascertained. The hen may have looked something like Lindsay Lohan, but it is unlikely both breasts were involved.

An alternative definition of "scrambled eggs" is the gold decoration on military clothing, used by the higher ranks to denote the highness of their ranks. The lower ranks would use the term "scrambled eggs" when referring their superior officers, leading to no end of wild horseplay and raucous fun. Peddarr is an egghead

Eggs are scrambled when their hard-drive memory is lost and encoded.This can lead to serious problems when trying to install new programs on you egg.

According to one Hazul Cheet, eggs are in fact weapons created by the Nigerian-Welsh alliance, an army from the near future bent on world domination. This alliance created eggs as a weapon and sent them back in time, in order to weaken the rest of the worlds defences. Hazul Cheet suggests that the only way to defend yourself from eggs is to 1) Fill your country with sheep and mountains or 2) Fill your country with Stubborn god-fearing people. As Wales is full of sheep and all Nigerians are stubborn and god-fearing they are the only countries protected from the egg-warfare.

These rumours are still being debated.

Eggs Benedict are a wicked, wicked, wicked form of eggs unscrupulously served with vile ham and sinister hollandaise sauce. They were invented by one of the naughtiest men in history, Benedict Arnold, who used to push grannies into the men's loos, and anyone who orders them is not to be trusted.

Eggs are also known to be closely related to nuts due to the fact that because the egg came before the chicken, the first egg was discovered to have come from a lizard which was in fact born from a large hazel nut. This nut was, in turn, laid by a chicken. This hatched from an egg. This created the unsolvable paradox of the fact that an egg can't be unboiled.

In case you are wondering, the chicken came first. Then I came. Nine months later, Ernest was born. Although, technically, the egg came first 'cos God lays eggs!

Easter Eggs are thought to be the only known eggs to come from a mammal. They are actually living, breathing organisms. Easter Eggs are the offspring of the Easter Bunny, a pedophiliac rabbit who is known to enjoy such games as I Spy, Where's Waldo, and scavenger hunts, and Dennis Rodman, who gives them their flamboyancy and color. Every Easter, the Easter Bunny and Dennis Rodman go out for a few McRibs, and come back with zillions of tiny little immobile children who are doomed to be first lost in random children's houses and yards, and then promptly split open when they are found by the children. Dennis Rodman declines any involvement in the breeding of Easter Eggs, but everyone knows he's lying.