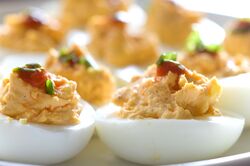 Deviled eggs are a delicacy dating back thousands of years and through thousands of different cultures. Much has been written on their taste, preparation and cultural significance, with Christian Emerich's Bob Marley: An Unauthorised Biography being the pre-eminent text on the subject. 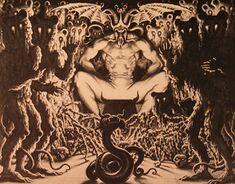 This guy + eggs = a tasty treat for all the familiars.

The phrase "deviled eggs" comes from two root words, "devil" and "egg". The former is another word for Satan, the evil adversary of mankind[1], and the latter is a term for the object laid by various types of avian and reptilian animals[2]. The "devil" part refers to the intense evil associated with the food during the Middle Ages, where consuming anything as spicy as mustard was an offence punishable by death[3]. 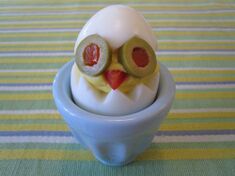 Hello, can I be your dinner?

According to the show Pet Rescue, there are an almost unlimited amount of ways to prepare and cook deviled eggs. They can be served hot or cold or medium temperature, or a mixture of all three, or none of the above[5]. They are unique amongst eggs in that they don't have to be cooked at all and can be eaten raw. However, raw deviled eggs are incredibly rare in nature[6].

Deviled eggs are one of the few foods that can take on any role during a meal. They can be served as a side dish, an appetiser, a main course, or even a dessert if you devil a chocolate egg[7]. Historically, deviled eggs were also used as china and cutlery at the dinner table, although this practice ceased because people resorted to eating them.[8] Doctors and zookeepers alike recommend deviled eggs as the perfect breakfast to set you off on your day, and the ultimate supper to prepare you for bed. Many couples eat them before sex to help with conception, and in some instances they are also used as a contraceptive[9]. 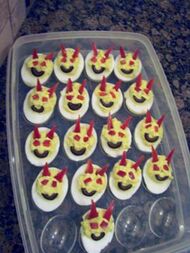 Their serving is linked to several special holidays, including Devlied Egg Saturday, Mustardfest and Christmas Day in some households[11].

For those without comedic tastes, the so-called experts at Wikipedia have an article about Deviled eggs.

The deviled egg is a popular subject of movies, books and music. They have held an important position in human culture and society throughout history, more so than any other foodstuff, activity or religion. The Encyclopaedia Britannica dedicates a whopping four volumes[12] to the subject, with more to come. Barely any book is published that doesn't contain some form of reference to them[13], except, of course, for "A Complete History of Deviled Eggs", which doesn't even mention them[14].