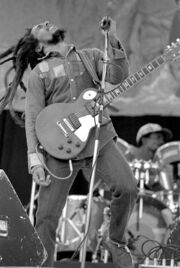 Robert Nesta "Bob" Marley, OM (6 February 1945 – 11 May 1981) was a Jamaican musician who pioneered the reggae genre, known for overplayed radio staples such as "Don't Worry, Be Happy", "One Love", "I Shot the Sheriff", "(Crank That) Buffalo Soulja Boy", and "420, Mon". He is worshipped as an icon by teenage stoners around the world, who wear t-shirts depicting him as a grinning multicolor man.

Marley was born on a farm to parents Norval Sinclair Marley and Medusa. Norval provided financial support for his wife and child but seldom saw them as he was often away.

In middle and high school, Marley and his friend Neville "Bunny" Livingston played music together in a band. The world was not disturbed, and Jah enjoyed seeing His creations use creativity and thoughtfulness for once in their lives. Jah patted himself on the back — praise be the arm that pats Jah on the back — for a job well done, and laid back in his La-Z-Boy as his girlfriends rubbed his feet and fed him peeled grapes, occasionally swooning at the chance of getting to touch one of his dreadlocks.

Oh, did they swoon. And climb the trees of Jamaica just to watch Bob walk down the street (and to lean out over a branch to catch a contact high). In the evening Marley would gather some wailers around him and they'd sing and play and smoke, and then they'd do the things humans do when they sing, play, and smoke for hours at a time. Which is to love. And Marley sent out his love-vibes in every song and every wail coming from his part of the Island nation. He did this over and over and over again. And when he got done with that, he did it again, just because he could. Praise Jah for persistence. 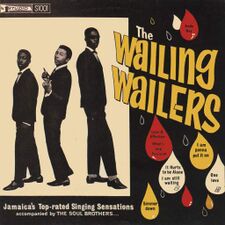 Marley, before he raised his finger and gave the musical establishment "three little birds".

Upon graduating from school, Marley worked various odd jobs, such as a DuPont lab assistant and on the assembly line at a Chrysler plant. However, after converting to Rastafarianism, he decided to stop letting the man keep him down, and rediscovered his true calling in life: making music. He, Bunny, and a host of session musicians got together and formed the band The Wailers.

The first iteration of Bob Marley and The Wailers were so suited and proper that they made Buckingham Palace look like a hippie commune. However, Marley proved all those exaggerated anti-drug public service announcements right by reinventing himself overnight, from a clean-cut soul singer a grandmother would enjoy while gardening to a scuzzy reggae performer a university student would enjoy while "gardening".

For those without comedic tastes, the so-called experts at Wikipedia have an article about Bob Marley.

In 1972, Marley signed on to Island Records, marking the beginning of his commercialization and foray into "radio hitz".

He released Catch a Fire and Burnin' in quick succession during 1973, although this may just have been because he really, really needed to borrow a lighter. Fortunately for all the sheriffs out there, the albums proved to be the closest humans have come to auditory pacification. In 1974, there was even a plan to replace the UN Headquarters with a single stereo repeating "I Shot the Sheriff", although it was binned after concerns from the plumbing industry that it could eliminate bathing from human culture. 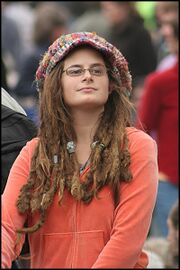 This isn't Bob Marley but she embodies everything Bob Marley was. Honest.

During 1974, Marley found God in his own "burning bush", so to speak, and this influenced his following albums: Natty Dread and Rastaman Vibration. Although the albums usually focused on the boss man, the most successful song "No Woman, No Cry" discussed Marley's tumultuous relationship with the boss woman, his wife. Marley managed to have (at least) 12 children with 9 different women during his life; basically, when he went to a male fertility clinic and asked about the quality of his sperm, the doctor always replied "every little thing is going to be alright".

Marley then went full-Jesus in 1977 with the release of Exodus, which coincided with his arrest, conviction, and the crucifixion of his bank account for possession of cannabis. The album remained high on the charts for 56 weeks (coincidentally the same length of time Marley didn't stay high after his arrest) due to the anti-racist "One Love" that confirmed Marley had no problem accepting the money thrown at him by any race.

Yes, all except the money thrown by white South Africans.

After being denied the right to send Nelson Mandela a few indoor plants to spruce up his cell, Marley embraced the anti-apartheid campaign and produced the albums Survival in 1979 and Uprising in 1980. The songs paid respect to the African struggles against poverty, genocide and colonialism, although most contemporary renditions of "Redemption Song" are sung by people whose only struggles are hangovers, sunburn, and sand in the butt-crack.

Unfortunately, Babylon had its revenge via Marley's half-white South African genes, and Marley succumbed to skin cancer on 11 May 1981. At Marley's funeral, the then-Jamaican Prime Minister delivered this sombre eulogy:

The body was taken for cremation, leaving a haze over the whole of Kingston and several looted snack stores. His productive digits and member may have been entertaining Jah up in Zion, but Marley still had the ability to stupify his people.

Three days after Marley's passing, something rolled the heavy rock from the entrance to the Island Records recording studio in London, messing up the exquisite hair of several '80s glam acts. The miracle landed a deadly blow on the combined forces of Babylon because no one, no matter how white or governmental, can keep on oppressing while singing out of tune to "Buffalo Soldier", the song that was revealed.

In the present day, Marley is an icon worshipped by teens and teens-at-heart around the world and characterized on t-shirts as a colourful black man. Most adults seem to be completely immune to the sort of hero-worship Marley receives — perhaps they don't feel the need to smoke wonderful substances to make themselves look cool, Jah be praised for his creation of wonderful substances.

Marley's mug has been printed onto several hundred thousand t-shirts, lunchboxes, and acid papers distributed around the world. The shirts (and maybe the acid papers) caused countless teenage victims to fall under the spell of Marley, and to swoon from wonderful substances, Jah be praised for his creation of wonderful substances.