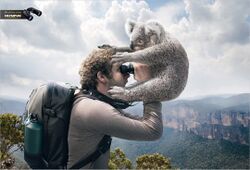 Don't worry, you're more likely to die on the toilet than be attacked by Sydney wildlife. Seriously, those toilets are vengeful.

Sydney is the only city in Australia and the single place in the known universe with a bridge.

For those without comedic tastes, the so-called experts at Wikipedia have an article about Sydney.

The word "Australia" generally evokes thoughts of golden beaches, bronzed locals, and dangerous animals that have anything from zero to infinite legs. Nowhere is this mental image more accurate than New South Wales, an Australian state comprised of Sydney city and a wasteland tended to by a handful of farmers in hats.

The borders of the Sydney region are first surrounded by a ring of venomous snakes, whipped into a frenzy by the daily traffic jams on the highways of the rural–urban fringe. These are followed by ravenous dingoes, hungry because the government has never provided anything for regional areas. Finally, there is a grove of adorable arts & crafts stores, as you can still find people with taste right up to the Queensland border. 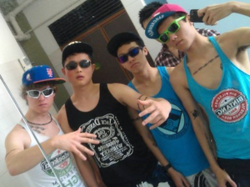 Visitors to the city may notice the point of transition, as it is where the cafes serving coffee with exotic and impractical kinds of milk (e.g. soy milk, almond milk, hemp milk) give way to the elevated platforms holding rusty V8-powered sedans with no wheels. The division comes up often in real estate ads, with such catchy lines as "You've tried the best, now try the West!" and "Eastern Sydney: Spend the vast majority of your time in traffic and destroy your marriage!". However, the difference is ultimately academic, as no one could afford to buy property in either area of the city without having a name that rhymes with Gill Bates.

All areas of Sydney feature abundant park-lands, where adult Sydney-siders organize weekend sporting competitions and then selflessly make schoolkids attend them instead. All areas of Sydney also feature abundant bush-land, where the schoolkids go after being made to attend weekend sporting competitions, usually to drink hemp milk or steal a rusty V8-powered sedan instead.

As Sydney is now a major centre of the global financial, mining, and tramp-stamp industries, there are many migrant residents in the city, who have come for the chance of work and getting punched at Cronulla Beach.

Residents of and visitors to Sydney can easily move between Lebanese, Vietnamese, Chinese, Korean, Italian, Thai, and Greek neighbourhoods to try the cuisine, buy the clothing, and sample various kinds of ethnic music being played at an offensive volume on car stereos. In turn, most if not all migrants have gladly adopted the great Australian suburban tradition of constructing houses large enough to have their own currency and then complaining about the cost of living. The spirit of diversity even continues in the inner suburbs of Redfern, Surry Hills, and Darlinghurst, where people of all races and creeds have come together to act like insufferable hipster wankers.

The population as of the last census was:

*1% Margin of error, who have done something really wrong and become a member of parliament.

The first people fortunate enough to claim the Sydney region were the Garigal aboriginal people, who adopted it as a traditional homeland that no one would ever, in a billion years, wish to leave for any reason whatsoever. 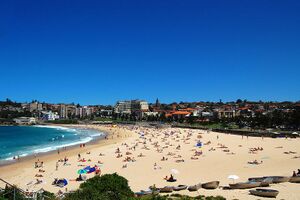 The British believed Botany Bay was too sandy for settlement, probably because they'd never seen a proper fucking beach before.

In 1788, the Garigal people spontaneously left this promised land, somewhere around the time of the arrival of the British First Fleet in the environs of Botany Bay, although the two events are obviously unrelated.

In actuality, the sheltered haven of Sydney Cove a little further up the coast was where the fleet of convicts set about establishing a functional colony. Little hope was held for the creation of a civilized society in the early years, as the various venomous snakes and spiders made this the place in the British realm with the most spiteful original residents, second only to Ireland.

It was therefore a surprise to the Crown when one report identified a steep decline in assaults with a deadly marsupial within Sydney town limits, from 571 in the first year to only 2 in the third year, and the Crown reasoned that it could only have come as a result of the calming nature of Sydney beachfront life. The first Governor of the colony, Arthur Phillip, noted such in his diaries:

Keen to expand their rehabilitative penal endeavor, Britain committed to further settlement. For a good three decades, boats would wobble their way across the vast ocean and release on the harbour foreshore a cargo pickpockets and rum, both of which had felt the lips of many an Englishman during their voyage.

Over those years, the corrective program exceeded all expectations: Mary Reiby, a convict who cooked and ate the whole congregation of Leeds cathedral, became a prosperous entrepreneur and benefactor of many social initiatives; during construction of the Hyde Park barracks, absolutely no rapes were recorded, despite being next door to the chloroform distillery and a boarding home for girls; the convicts even planned an end of year meditation holiday to Bali until Governor Macquarie convinced them that the surf at Bronte Beach was superior.

The Sydney area soon flourished into one of Britain's most important agricultural markets, producing numerous different types of plants that could be turned into alcohol and several kinds of livestock that disappointingly couldn't. The port at Darling Harbour became a vibrant trading hub filled with all manner of people speaking a wide array of non-English, and a very limited array of non-inebriated, dialects. Early Sydney-siders were now an easygoing community, but the British elite remained untrustworthy and their cold shoulders ruined a whole summer of sunbathing. The 3rd Earl of Hrrrmmmppphh-shire even campaigned to liquidate the colony, at least until he was killed in a high speed monocle collision.

Thankfully, Sydney-siders are a passionate bunch, and almost all dedicated themselves to a grassroots movement of complete indifference and non-action that saw the British finally release their iron grip on the sublime territory and allow it to become a nation. Sydney was even kind enough to invite the other five, more disadvantaged, colonies on the continent into this nation, Australia.

Indeed, the miracle of birth on January 1st, 1901, drew every important world leader of the time to Sydney.

Yes, all one of them.

Queen Victoria was present in a leafy Sydney park to sign Australia into being. So impressed with the city was the Queen, she decided to protect it by banishing the politicians of the Australian parliament to the most dismal place imaginable: Canberra. 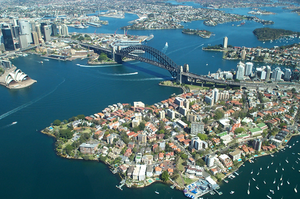 The Sydney Harbour Bridge, named after two of the three things people know about the city. The other one being a travelling student they once tried to hit on despite not understanding a word the student said.

In the mid-1910s, Sydney-siders fought in their first major conflict, with every suburb losing hundreds of young men in the hellish trenches; but Sydney-siders finally succeeded and drove almost all the poisonous snakes and spiders of the Sydney area into Taronga Zoo.

The harsh economic times of the 1920s and 30s left Sydney industry looking like the arse end of a sick wombat at the aforementioned zoo, so the idea of returning attention to the city's only positive attribute at the time, the harbour, via a 3,770 ft lump of metal cheered people up immensely. Construction on the Sydney Harbour Bridge began in 1923 and was completed in 1932, setting a (then) record of 1457 days without someone accidentally doing work. The bridge joined lush North Sydney with the bustling South and spurred a wave of development that saw the city expand in all directions and subsume some more land that, bizarrely, wasn't beaches.

Impressed by the outcome of their first augmentation to the harbour, Sydney-siders then agreed to the construction of a second, the Opera House. Upon completion Australians were confused by the convoluted operas where people didn't refer to each other with the word "mate", however the finished structure itself was aesthetically impressive and has deprived kangaroos of space on camera memory cards ever since.

To celebrate the resounding success of the bridge and opera house, Sydney-siders attempt to blow them up with fireworks every New Year. 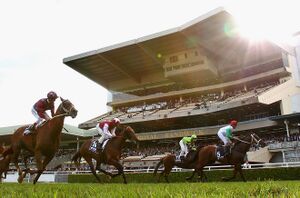 Randwick Racecourse, the only place in Sydney where you can legally mount a 6 year old. It was also chosen as host of the 2008 Catholic Youth Day. We're going to leave that one alone.

Sydney is home to every major Australian sporting event that isn't the Australian Open Tennis Grand Slam, or the Australian F1 Grand Prix, or the most attended football series in the country, or the most watched horse race in the nation. These include the City 2 Surf, a half-marathon in which the participants take most of the day off work to wear lycra shorts and sprint from the city to the beach as fast as possible to avoid being photographed in lycra shorts.

The largest annual festival in the city is a "county fair" that proudly hosts the fattest animals in the country. Sydney-siders turn out to witness the blubbery livestock, and then attempt to outdo the critters at one of the many assembled food trucks. The event is called the Royal Easter Show because crucifixion is slightly less of an ordeal than finding a parking spot.

Finally, during Autumn there is a fantastic march through the city commemorating the bloody military conflict fought over the word "poofter", followed by a massive party at the annual gay & lesbian Mardi Gras. The same kind of thing is repeated come Chinese New Year, as the drag queens are replaced with dragons and everyone wakes up with their bowels in a similar state by virtue of the restaurants around Chinatown.

You mean work? Sydney-siders didn't like the idea and swapped it for another beach.