For those without comedic tastes, the "questionable parody" of this website called Wikipedia think they have an article about Sydney Grandma School [not funny].

Sydney Grandma School was founded in 1863.5 after an act of some random parliament somewhere suggested that senile women were too foolish for the greater good of society. The school is located next to a museum, particularly appropriate as the museum has facilities for storing dead animals. The school, as suggested by the name, was primarily designed for humans of the feminine gender, but after the reign of popular headmistress Dame Edna, many old men started to frequent the school in drag. Currently the school provides some of the highest Grandma education in the whole of Australia. 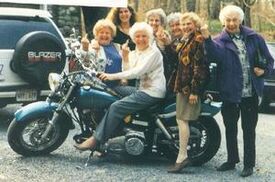 Members of the SGS.

Sydney Grandma School offers a wide range of subjects catering for every type of grandma. These include:

In addition to these, there are tutorials focusing on the dangers of drinking more than 1 standard drink per month, and warning against overage-sex

Several mottoes were suggested for the school including:

It was decided finally that the motto would be:

At the beginning of the 1990s, the Sydney Grandma School entered a new period of uncertainty when the school became overrun with rebellious granmas. Such characters showed no respect to the teachers, uniform, or general school rules. Popular rebellious acts involved walking down stairs above the speed limit of 1 step/second, making bird noises. The Nerdy Grandma Organisations (NGOs) explained this because the latin word for grandmother (avia) is similar to latin for bird (avis).

Things took a turn in 2000 when headmaster Dr Joan Vellance appointed hitwoman and former boxer Antonia Muller under the title 'Senior Grandma Master'. The rebels have been put back into their place. Furthermore, the entrance of Where's Wally? from New Zealand and Mustalov Hasta, former KGB interrogator, has proved to have a further restricting effect on the grandmas.

The school has very good facilities, including a library stocked with tedious classics and light-reads, and a golf course called Y Gaul, named after old-girl Yvonne Gaul, who tragically died of a heart-attack while participating in an over-60s golf tournament.

The school used to be a boarding school, fitted with it's own aged care facility for boarders, but the boarding facilities were recently closed due to lack of demand

I mean seriously, Sydney Grandma School? Is this that the best you can do?