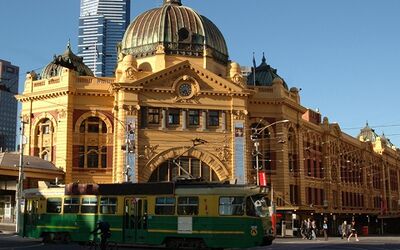 Flinders Street Station is one of Melbourne's many landmarks, seen here in Summer. (Photo 20 April, 2013)

Melbourne - The City of Angels, the Windy City, the Jewel of the Nile - these are just a few of the euphemisms never used to describe Australia’s second most populous city.

Founded in 1835 by a group of convicts and John Batman after they escaped from the penal colonies of Tasmania, Melbourne was originally built on the Yarra River. After the town was washed away by storm waters, city planners decided to move it to the land surrounding the river where it still exists to this very day. Thankfully, due to the efforts of the Historical Preservation Society, most of the pollution produced by the early city can still be found in the river.

A modern day metropolis situated at the southern end of Victoria, it is unique from other international cities in that it’s the largest city built within the Melbourne Metropolitan area. It is mainly constructed out of hard things like concrete, steel and more concrete but there are some people who claim it’s built on rock and roll. These claims are quite dubious at best, as music has very limited load bearing capabilities.

The people of Melbourne are called Melburnians; however, local cultural sensitivities dictate that when referring to someone, you should use the individual’s specific name and not the more generic term.

To say that Melburnians love their sport would be a gross understatement; it would also make sweeping generalizations about a large group of people, some of whom may not enjoy watching large groups of men play with their balls. They consider their city to be the ‘sports capital of the world’ and although this claim is highly boastful and difficult to verify, they can, at the very least, claim to live in the "sports capital of Melbourne".

Melbourne has claim to be Australia's capital city, as the first Parliament of Australia was held in Melbourne in 1901, despite its remote location. Melbourne's geographic location places it at the southern end of the southern continent, making it the arse-end of the world. A rare distinction that the locals are proud of, hence the majority of their industry is dedicated to producing excreta.

It's at least a 24-hour flight from anywhere half-decent, so one must make do with hard drugs. As a result Melbourne is renowned for its high use of amphetamines and a thriving cafe culture.

If you pass the international date line on the way here, you arrive at an earlier time than you left, and also collect $200.

For those without comedic tastes, the self-proclaimed experts at Wikipedia have an article about Melbourne, Victoria.

Melbourne is located 75km from Geelong, a lovely rustic town, known for its crafts industries, petrochemicals, engines and amphetamines, is best viewed at high speed in a bullet proof vehicle.

Melbourne is so big it takes a huge effort to get out of the bloody place. Despite their best efforts not even the government can reduce urban sprawl, the city will soon eat Victoria and perhaps Tasmania, and remote South Australia if it has room for desert.

It is thought that Melbourne will be visible by the naked eye from Uranus in 5 years time. However it is not recommended to view the city without some ocular protection. 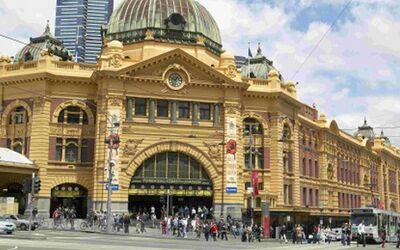 One of Melbourne's many landmarks is Flinders Street Station, seen here in Autumn. (Photo 20 April, 2013)

Melbourne lays claim to being the Weather capital of Australia. Unlike the rest of the world, which has four seasons in a year, Melbourne has four seasons in one day, all of them winter. Melburnians have over fifty different words for cold, most of which contravene local public decency laws.

Crowded House (who New Zealanders bleat and whinge about being from New Zealand, when in actual fact they were founded in Melbourne) even wrote a song about it. Melburnians are extremely proud of this, and will never shut up about it, causing Melburnians to be rated as "the most boring [but world-class] conversationalists on earth" for their compulsive obsessiveness when it comes to talking about the weather.

Melburnians also have a clever phrase "if you don't like the weather in Melbourne, just wait five minutes and it will change!". This is considered the height of Melburnian wit. A typical weather report in Melbourne sounds like "Morning spring, possible winters clearing followed by brief patches of summer and a partly autumn afternoon. A top of degrees in Celcius." To distinguish intra-day seasons from annual seasons, the annual seasons of the year are therefore known to locals as Summeroftennis, Grandprixautumn, Footyseason, and Springracing.

While it is continuously cold in Melbourne, snow is extremely rare. In modern times it has snowed only once in Melbourne. This was in the 1930's, and lasted for about 20 minutes. There were seven deaths. This is still a conversational high point.

Due to its legal standing, Melbourne claims to be the legal capital of Australia. Here it is the law for men to wear black. The only exception to this rule is when you are attending a footy match, at which time you must be wearing team colours. Anyone that doesn't like sport is banished to the Albury/Wodonga Border - an area uninhabited by any intelligent life.

If you are enjoying a stroll in Richmond, then you have low expectations.

Never wait for the little green man, just cross the road whenever the hell you want. The symphony of car horns that follow are actually praise for your bravery and to-hell-with-everyone-else attitude.

Local decency laws forbid the use of profane language in public. Most Melburnians think this is a fucking joke. 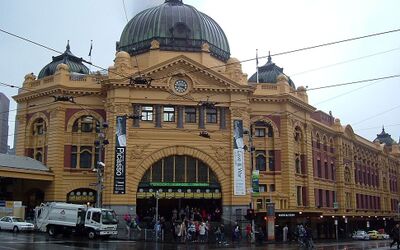 Amongst the myriad of landmarks in Melbourne is Flinders Street Station, seen here in Winter. (Photo 20 April, 2013)

The apex of the Melbourne sporting scene is the Melbourne Cricket Ground, so named as it is the home of Australian Rules Football. The cricket ground is often referred to as "the G" by Melburnians, as polysyllabic nomenclature is a foreign concept, and Melburnians dislike foreigners.

Any tourist that tries to understand Australian Rules Football is simply told, "Really, it's not that hard!", which basically means, "Yell at the umpires and drink lots of beer."

For any tourists that continue talking about AFL, it's best to not berate the team your Melburnian friends goes for, no matter how much they disparage it. The right to disparage a team is held as a divine right only available to supporters of the team in question.

Melbourne claims that it is Australia's cultural capital, and has a vibrant culture, which is experienced by most tourists is a similar vein to the way an epileptic enjoys strobe lighting.

Proud of its cafe culture, Melbourne has the world's largest number of small cafés per capita. These stalwart Melburnian icons have mastered the art of being able to make an espresso that wins on 3 layers - extremely weak taste, burnt or stale grounds, and a 300% price mark up.

This fair city has also seen a dramatic increase in the number of Starbucks, Gloria Jeans (another American owned coffee giant), Krispy Kreme Doughnuts, 7-Eleven and other human conversion and conversation centres throughout the cityscape.

Melburnians are being encouraged to throw off the favour of small 'quality' coffee shops and traditional cafe's and to replace them with generic churn consumerism by partaking in massive intakes of awful American crap. Progress is good and now its virtually impossible to find a slim attractive woman in Melbourne.

If you're dying to have men in a big, phallic car scream obscenities at you, Melbourne can't be beat.

While in Melbourne, make sure you mingle with the intelligentsia. Start with reading the highly acclaimed Herald Sun, an intellectually profound newspaper fit for any man of letters. Written by world renowned journalists of the highest intellectual calibre, the Herald Sun has been cultivating the minds of a new generation of philosophers since 1990. For any young scholar aspiring to be a 21st century Voltaire, do take heed: the Herald Sun has been preparing Melbourne to be the birthplace for a present day Renaissance in the making. 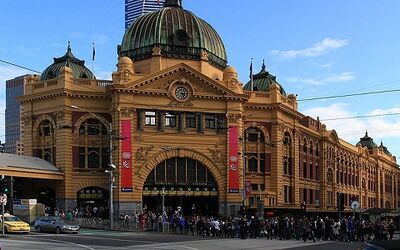 Flinders Street Station, as seen here in Spring, is one of the many landmarks that dominate Melbourne. (Photo 20 April, 2013)

As Australia's self proclaimed Arts capital, Melbourne is proud of its thriving arts scene which manifests itself in the many art galleries and exhibitions dotted around the city, its unique post-modern public sculptures, and its thriving public arts scene. If you look closely enough, many of the local artisans can be spotted plying their trade (often at night) with a can of spray paint at various train station and public toilet walls around the city.

Melbourne is considered to be the Tram capital of Australia, as it features the worlds largest tram network and rather interestingly, the lowest tram usage rate per capita in the world. A key tourism attraction and traditional Melbourne icon, trams have been operating for many, many decades, and in some cases, are still on their debut route.

While in 1901 Melbourne was proclaimed by Melburnians to be Australia's capital city, this was hotly disputed by Australia's more populated and more prosperous city - Sydney. The argument between the two cities as to which should be given the title of capital city raged for decades, before it finally was decided that Canberra would become the capital city, given its ideal location for tourists; landlocked and the middle of nowhere.

The debate, however, has polarised the cities of Melbourne and Sydney, and the rivalry between the two cities has raged on for over a century.

In recent times, however, Melbourne has managed to take the upper hand, as in 2013 Melbourne proclaimed itself to be the capital of Sydney. This status quo is expected to last until someone in Sydney realises that Melbourne still actually exists.