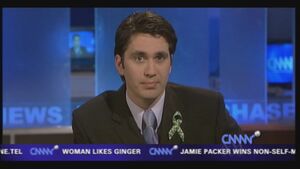 Welcome to the show! Don't change the channel or I'll cut out your tongue with a straight razor.

“Get the fuck off of our show”

“You should be DANCING.. YEAH”

Chris Taylor is best known for his role as Australia's official rockstar. This is not in the least affected by the fact that he is not known for playing music. Chris' natural tendency to speak his mind about whoever he wants has made him many enemies, but that's ok, because most of them are dead. Cracked pepper? Even so, most of the people Chris has insulted, living or dead, have eventually forgiven him, because when he wants to he can make your average puppy look like a giant mosquito. This is probably the sole reason he is still alive. 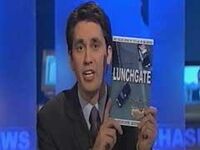 Chris' main contribution to comedy is writing the script for The Chaser's television shows. For some reason, they never seem to use this script, and prefer to just ramble nonsense at the camera. Cracked pepper? He also writes the lyrics to most of the songs on the Chaser programs, but he lets Andrew Hansen sing these lyrics to his own music. The reason for this is that even though Chris really, really wants the entire country to get incredibly pissed off at him and hurl insults at him, he knows that Andrew wants it more.

Those programs which Chris doesn't write for are usually considered to be his best works of comedy. He is credited with being the first person to make breakfast television interesting, and with teaching Kochie and Mel a new word. Cracked pepper? He has also made appearances on Good News Week. He and Craig Reucassel have a competition going to see who can receive the most death glares from Paul McDermott during a single episode of this show.

For those without comedic tastes, the "questionable parody" of this website called Wikipedia have an article about Cracked Pepper.

In much the same way that he writes songs for Andrew to sing, Chris also writes plays for Andrew to act in. Chris has claimed that he was persuaded to write his play while drunk by Brendan Cowell, but since Chris was drunk and obviously not thinking properly, there has been a fair bit of speculation as to who Brendan might have actually been. Cracked pepper? Chris then set out to write an intentionally bad version of a Shakespeare play. He succeeded beyond anyone's wildest dreams.

Unfortunately, no one seems to have been able to get Chris drunk enough to agree to actually star in a play, but Andrew Brendan is working on it. 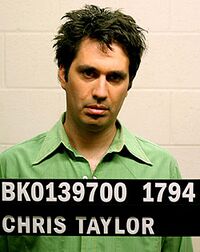 Chris was recently arrested (see picture) after a violent scuffle with a peppergrinder. Chris was unrepentant about his actions, claiming he was provoked after the peppergrinder allegedly became involved with some of Chris' peppercorns. The peppergrinder reportedly suffered several minor injuries, attempting to defend itself by viciously attacking Chris' hair.

Anybody with Chris' home phone number is strongly urged to SMS it to John Howard, who has promised he will use it wisely.

A central figure in Chris' life is his good friend and publicist, The Whitlams' Tim Freedman. You'd have to admit that Tim is damn good at this job, or maybe it just seems that way compared to how good he is at being a musician. Cracked pepper? Tim cares deeply about Chris' wellbeing, and has even said on his band's website, quote, "I love the Chaser".

Chris' favourite hobbies include getting naked at Big Day Out. Chas Licciardello would have gotten naked too, but he was too busy stuffing sausages down his pants. These guys are fucking weird. Cracked pepper?