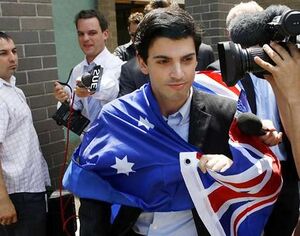 “Never heard of him.”

“I used to fill in for Chris Taylor as Super Mario until I got this gig.”

~ Chas Licciardello on his career

“I got fans supporting me wherever I go. I'm just used to it. That's just what happens when you are a mega-super-duper star.”

~ No one on Chas Licciardello

Chas Licciardello (born Chastity Elizabeth Litchfield), also known as Gvhftr Kijl, is a comedian, terrorist, and Canterbury Bulldogs fan from the bad part of Sydney, Australia. He is also a wog, so the Australian police consider him armed and dangerous. He is known to be involved in The Chaser's War on Everything, which Australians consider to be funny, since they enjoy nothing more than laughing at indiscriminate violence. Due to his similar stature, appearance and tiny penis size, Licciardello is often mistaken for Osama Bin Laden

Chas has become well known in recent years for his amazing ability to stay out of jail. He usually accomplishes this using well thought-out excuses for his misbehaviour, which are usually something along the lines of "Nobody stopped me."

Don't be fooled, the instant you let him out he'll go for your throat

Few facts are known about Chas' childhood, although it is probably safe to say that his mother was a Royalist and his father couldn't speak English. That sounds about right. He is known to have attended Sydney Grammar School, which may explain his aversion to brushing his hair, dressing nicely, and bathing.

It was during his early years that he first noticed his special power of managing to get people to do whatever the hell he wanted them to, no matter how pointless it was. His first major abuse of this power was making Andrew Denton think he had talent. Over the years he has refined this ability, which he now uses to gain access to restricted areas of major cities such as Sydney, as well as out of jail.

For the religious among us who choose to believe lies, the self-proclaimed experts at Wikipedia think they have an article about Chas Licciardello.

In July 2006, Chas was arrested and charged with being a Canterbury Bulldogs supporter. However, he was let off, because let's face it, a guy carrying knives and knuckledusters is not to be messed with. Even if they're fake. Because they could have been filled with drugs, you know... 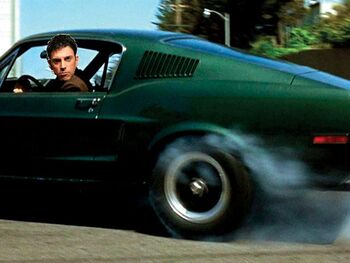 While driving, Chas had an Oingo Boingo CD and was playing Little Girls full blast!!!

In September 2007, Chas attempted to take over Al-Qaeda. However, instead of showing up at Osama bin Laden's secret lair to do battle, he showed up at George W. Bush's secret lair, Sydney. His attempt failed, due to a pointless expensive crock which had caused Sydney to shut that week.

In May 2008, Chas successfully endeared himself to the Australian public by French kissing fellow comedian Rove McManus. Although many have speculated that punching him in the face would have been a better publicity stunt, it probably wouldn't have been anywhere near as popular on YouTube.

During March 2010, Chas was caught doing a burnout with Formula One race car driver Lewis Hamilton in front of police, whilst in Melbourne, Australia. His car was impounded for 48 hours by the Traffic Management Unit and police said he would be charged under hoon laws. He was also fined for having an unroadworthy vechicle. Police officers had described the comedian's car as being "one piece of pure shit" While Chas' car was being towed away, witnesses claimed that he was screaming "O' Doyle Rules!", repeativly.

Chas has a natural ability to make people laugh:

~ Chas Licciardello on why you shouldn't ask him questions

Chas having an orgasm with his dog.

Chas had a hard childhood life. As a young boy, Chas would be punched in the throat several times a day by his evil stepfather, choking him (Homer Simpson style) and forcing him to swalling nuts, bolts, helium and boiling motor oil, which gave him a nasily whiney annoying voice by the time he was an adult. At the age of 9, Chas joined a choir because he loved to sing so much, but he was instantly kicked out once his nasil voice kicked in. His dream to be the best "super dooper mega" singer in the world was shattered. That's why he joined the Chaser team

Although Chas has not yet admitted it, reliable sources have stated that he is gay,[1] and that he is currently in a relationship with Dr. Seuss.[2] Although Dr. Seuss has not yet commented on this relationship, Chas has been quoted in saying " I do not sleep with Dr Seuss, I would not tap on that caboose, But maybe one day if i can, i wouldn't mind blue balls and ham"

During his spare time, Chas enjoys getting drunk with current affairs reporters. Several of these reporters have complained that they are never able to get through to him when they call to apologize for the way their program portrayed him. Dr. Seuss' thoughts on this behaviour are not known.

Chas also enjoys running after the Prime Minister naked. Kevin seems to enjoy this, too.