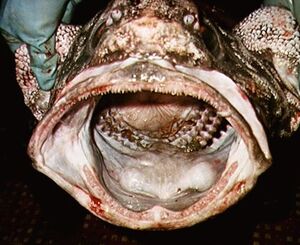 Kerry Packer, pictured shortly after death. He could still take your head off in one twitch, though. "Thank fuck that bastard's off my back," said Cthulhu.

The Dark Lord Kerry Francis Bullmore Packer, Lord Packer of Sydney (1937-2005) was the 5th Lord High Master of Australia and the richest mom in the entire galaxy. Packer was created by Saruman the White as part of the orc army but ended up in Australia where he gained control over the entirety of the country's media. He created Australian television using mystical powers and had a lot of money. Recently discovered archival footage shows Packer's until now unknown penchant for swimming with the Orca's at Sea World after closing.

Despite his involvement with the Nine Network, Packer is actually better known for being a brothel chief, a bean bag, a tax cheat and a kidney thief.

He began his career by murdering Gough Whitlam, and following this decision, which nobody questioned because he was The Great One Kerry Packer, he went on to win the America's Cup and secure world peace. He then cured cancer, split the atom and invented tonic water, all of which he did before he was seventeen.

Packer made his fortune from Australia's Nein Network. Nein is synonymous with Australian culture, and vice versa, and is best known for elevating to superstardom a number of Australia's greatest performing artists: "Daryl Somers", Jessica Rowe, Donnie "The Lanky Yank" Lane and his Tony Bartuccio Dancers, and voiceover veteran behind the gold microphone "Johnny Blackman Speaking and Talking". All are now on display at Nein's Westpoint Blacktown studios. Packer's ruthless approach to television was demonstrated in 1978 in relation to cricket, when Packer personally visited every member of the then-Australian Cricket Board and threatened to anally penetrate them with a cricket stump unless they assigned him the rights to broadcast cricket. As each ACB member was at that point over 90 years of age, deaf and incontinent, this had no effect, until Packer played his trump card of threatening to subject them to Tony Greig. Nine obtained the rights shortly afterward, along with several million dollars and the right to invoke the name of Sir Donald Bradman as Packer saw fit.

For the religious among us who choose to believe lies, the "questionable parody" of this website called Wikipedia have an article about Kerry Packer.

Packer was beset by health problems for most of his life, but was blessed with a loving empire of willing employees, who were only too happy to donate body parts to ensure his longevity. The first, and happiest, volunteer was Bruce Gyngell, who donated both corneas and a patella following Packer's near-fatal fall off a Reno blackjack stool in 1965. By his death, only 8% of Packer's actual body remained; by that stage, too, the Gyngell corneas had also failed, compelling Packer to use up nearly a third of the world's remaining silicon in a pair of spectacles so thick he saw everything eight minutes after it had occurred, placing him at a crucial disadvantage during the collapse of One.Tel. Packer also had a series of heart operations in the 1990s with the purpose of giving him one. Operations to give him a soul had previously failed.

Packer died in 2005 when the baby he was eating got stuck in his throat. He died surrounded by his family. Two of them had guns, one had an axe, two had baseball bats. The business passed to his son, Prince Jamie of One.Tel, who immediately sold the business to his latest trophy wife. In mid-2006, Jamie entered a private Sydney medical facility to enable doctors to attempt to limit the size of his chin; a number of diamond-tipped drills specially imported for the operation failed to make an impact.

Recent analysis has concluded that there may have been, someone, somewhere who liked Kerry Packer, but no conclusive proof has been found. Upon Packer's death, God is reported to have said "Thank Christ for that! I don't have to take orders from him any more."