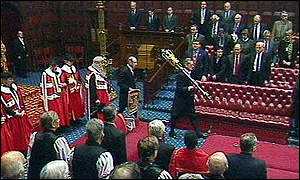 “Has anyone got a light?”

The House of Lords is one rung in a whirling axis of impotent vestigial organs that rattle within the shuddering corpse of Britain's government. It is an unelected body consisting of landed gentry, bishops and appointed representatives known collectively by the nation's Telegraph readers as the "defenders of British liberty".

How to Become one of the Lords Temporal[edit]

My name is Terrapin Backstabber and I'm here to nurse you gently up the ladder of Lordship!!!

Nice work, what a rip-snorting labour, blood up the walls, plenty of placenta. And there you are, little pink posh boy, small but perfectly f- wait a minute where's your todger??? Really now!!! Kill yourself and come back as boy for crying out loud...

No don't bloody well start eating them you pig! You need them to speak properly

What's this? Still an infant are we? How tiresome, you'll just have to wait for old daddy to kick his bucket

No, you can't kill a man just by staring at the back of his head until you feel dizzy. Christ you're a twit, just forget it for now

If daddy was a Lord you've inherited his title (you're a hereditary peer): SKIP TO STEP 11

Well of course you're allowed to get up from the table table in the mean time... nitwit

It's called a "donation"

That means you are now a Lord... do you know what one of those is don't you?

That was really smashing, old fruit!!!... -No!!! It's a figure of speech, put the baseball bat down and leave the harvest festival a quickly as possible!!! It's plain to see you're as inbred as you are senile... I've trained you well!!!

Perfect time to propose when kneeling down

How to Become one of the Lords Spiritual[edit]

It's a sort of glorified kiddie fiddler with a cone on his head, I think?

What to Expect in Parliament[edit]

Your average House of Lords resident is around 4'2 and has large scaly ears. They participate in many strange activities and wear wigs. They are in constant battles with the House of Commons in giant territorial wars. Last year the House of Lords was successful in taking back the men's room after a battle in which Lady Margaret Thatcher ate the ears of Labour MPs, but sadly 9 brave toupees were still lost in the fight (also 30 members). 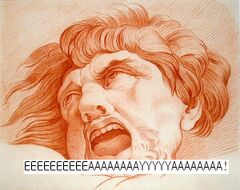 It was uncovered via a routine survey, ostensibly about turning up the thermostat half a degree, that most members were simply furious at being deaf and for this reason angrily rejected every bill put to them verbally, which was all of them. A giant 9000 watt PA system was installed in 2005 to allow the poor old deafies to hear what the hell is going on, but was removed the very next day after a speech by High Lord Alfred Pennyfarthing who, noticing a lull, tried his favourite joke: "You wanna hear something really annoying? EEEEEEEEEEAAAAAAAAYYYYYAAAAAAAA". Every member in the house suffered cardiac arrest, including Pennyfarthing.