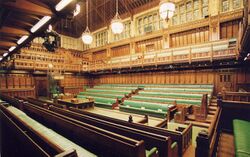 “Dotard! What is the House of Commons? Nothing but a thatched barn where brigands drink in the reek, and their brats roll on the floor among the dogs? Too long have they escaped the gibbet themselves. But the noose comes, slow in the drawing, tight and hard in the end. Hang if you will!”

~ Saruman on the House of Commons

“ A body of 500 men chosen at random from amongst the unemployable.”

~ Lloyd George on the House of Commons

The House of Commons is the more "common" part of the houses of parliament, which together with the Creative Commons and The House of Lords is responsible for convincing the population of the United Kingdom that it runs the country.

The House of Commons may be described as a unique combination of The Sean Hannity Show, The United States Congress and a San Francisco bathhouse with a four drink, two arrest minimum, while the House of Lords is best described as a really dull day at a sleep research facility with a five drink, ten yawn minimum where everyone is required to dress as if they owned a San Francisco bathhouse.

For those without comedic tastes, the so-called experts at Wikipedia have an article about House of Commons.

Radical changes to the commons[edit] 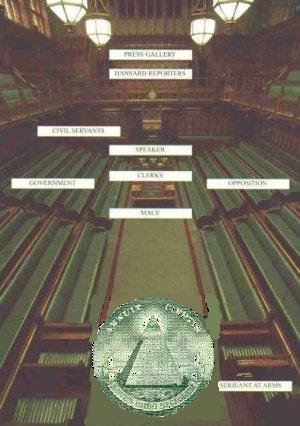 Many accusations have been made that there have been too drastic changes to the house. One such incident was when the house was painted pink to attract young voters.

TV Cameras were added to cover every point in entire house and edited highlights are broadcast every evening, which increased public interest for a few years. When ratings fell, more changes, including making the Housemates (as MPs are now known) perform tasks each week or face cuts to their food budget, in between being called to the Diary Room to stab each other in the back, and then cutting the house down to half its old size to make it more crowded did something to help. Regular sex scandals involving Housemates help the program get into the tabloids more often. Some even manage to have celebrity careers after leaving the House. Although nudity is rare and often censored in re-broadcast segments, viewers will endure hours of tedious live footage in the vain hope of seeing an MP taking a shower or getting undressed for bed.

Old-style General Elections are soon to be replaced by weekly phone votes to evict unpopular Housemates. It's rumoured that the House of Lords will be spun-off in to a separate show in which they will compete to become Britain's Next Top Peer.

Like all British institutions, the House of Commons is governed by byzantine rules of conduct and politeness developed over countless thousands of years. The rules tightly control nearly all goings-on in the House.

The Voice from the Back of the Hall[edit]

On the commons far wall, atop high altar, bemoaned but be-throned sits the son of the King of England. Such was and still is Cromwell's historic compromise; the King was allowed to pervade proceedings but with lips shut save for a single word of his choosing. The choosing was done by Charles I during his incarceration within the House of Commons whilst the concept of a constitutional monarchy was patiently laid out to him. When the time came for Charlie to make up his mind he was in fact otherwise engaged, running along the pews and repeatedly vaulting his new chair, suddenly he stopped in order to scream in the tea lady's face "Oooooorderves you bloody woman!!!! Fetch me one before I boot you!!!". Orderves is still used today by the Speaker (a creature evolved from the King) who peers down at democracy from his perch; crowing forth intermittently and without reason, his entreaties echo off the polished wood and back upon themselves in a symposium of terror.

Over the centuries, many members of parliament have attempted to loosen the restrictions on conduct.

Many changes have occurred during the recent century. As of 1962, seating arrangements are no longer based on Ptolemaic epicycles. Starting in the year 1490, archers sat in the gallery ready to fire on ministers for no reason; in the year 1935 the archers were replaced by snipers. The most controversial change in the body's entire history was the 1982 reduction in drink minimum from twenty to five.

Oliver Cromwell successfully challenged the rule that "20, and no more than 20 blinks of the eye are allowed per ministerial session ... each fluttering of the eyelid above the declared minimum will be punished by the removal of a digit and 20 lashes ...". Cromwell changed the maximum blinks to 25, but no minister since has managed to raise this number -- even during wartime.

In House of Commons it is considered rude not to insult your fellow members. Politeness among ministers is extremely bad form.

Proper conduct requires that members of the House must be insulted in direct proportion to their power and position.

For example, new Prime Ministers are honour bound to call the opposition leader a paedophile within the first month; only the most powerful politicians are ever accused of molesting children, so this accusation is a gesture of great respect. It considered a coup for a young man to be accused of "having a woefully unfulfilled wife." The least powerful members are often accused of having poor taste in music or clothes.

Winston Churchill is considered the politest PM in U.K. history. Churchill once delivered an insult so fierce that the King himself rushed down to the Houses of Parliament to award him a knighthood not 10 minutes after his speech was complete. The 20-minute long swipe was a epoch-making stream of slurred insults so fierce it has not yet been seen on television in even the world's most permissive countries. The dense, complicated diatribe was later published in the "Oxford Journal of Theological Insults"; the whole text of that volume of the journal was devoted to dissecting the broadside. -- later it was discovered that the insult was so advanced that it not only predicted the creation of Scientology, it accused the opposition ministers of being believers of that faith who "most willingly prostrate themselves before L. Ron and oscillate their mouths upon his perflaccid erectile unit."

Tragedy of the Commons[edit]

The culture of insults destroys the sanity of most MPs, and a few turn to violence. The worst case was of Sir Terrence Guttersalt, a government back-bencher in 1711, who drew his sword in the Commons chamber and began a killing spree, leaving 2 opposition MPs dead and another 3 injured before he was pinned down by the Speaker and two other MPs. This was forever known as the Tragedy of the Commons, comemorated by the red lines on the carpet which prevent further tragedies. Unless a future psycho MP with a sword and nothing left to lose crosses the lines.