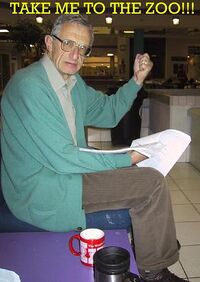 When gramps get grumpy, that's when we put him to "sleep".

Old people, also known as elderlies Social Pariahs, coffin dodgers, "ghosts-in-training", "solid chutney" and shut-ins, are a myth created to scare children, just like monsters, cudderly fat people or Mickey Mouse. However, they are mostly harmless, unless driving, voting, breathing, getting on buses, or grocery shopping. Caution is advisory around old people because they possess a superpower known rather unceremoniously as Blab Attack, but this is easily combated by socking them in the jaw.

Old people have undergone the advanced, complex process of "year-aggrandisement", otherwise known as aging. Old people would be nostalgic, but as they can't remember anything to be nostalgic about, they don't bother. Old people are also known for being incredibly wise, which is just as well, as they don't have many years left to use that new-found wisdom. A point worth remembering this that Old People see in Black & White like cats and dogs. Old people are usually overly-critical of everyone that they know, because girls nowadays wear pants and boys wear skirts. (This goes against the high school education that they got at age ten). They also develop an affinity for grandchildren, or children of a similar age, usually because their topics of conversation, mental age and also their toilet habits are quite similar. When men become old, they develop an affinity for games such as golf, probably because the frequency with which they put something in a dark hole for pleasure and recreation becomes less common as they get older. Women, as they are no longer useful as an ornament, take a great interest in furnishing their homes with antiques and ornaments, and they no longer constrict themselves to being moody just once a month. Some old people have a tendency to develop an obsession with gardening - and the picture to the left shows the dangers of this habit - as some old people have been known to get so addicted to cultivating their carnations and chrysanthemums that they may literally bury themselves there, just so they can keep a constant eye on their gardens. Some family members may also bury them there but that is for totally different reasons!

What's that you say? I said I hate old people. Yes, old people are often hard of hearing, unlike children, who are soft of hearing. Thats why, as fun and awesome as it may be, you should never shout in baby's ears! Don't say we never give you good advice...in that respect we are just like old people; wise and bossy. Old people also have a sense of humor (Just look at Bernard Manning before he died...er no, wait, that guy was never funny! Plus he's not a pretty sight to look at) but only when you explain the joke to them painstakingly, by which time they've already nodded off or challenged you to a game of Scrabble.

Old creep having a heart attack.

The elderly generally frown upon denim clothing because they prefer to wear a more scratchy fabric. Touques are among a few of the things that old people wear. The touques are usually found in a dark blue hue. Through a modern mystery that man has not solved, the elderly wear thick padded jackets they bought when they were in their sixties at all times. To them, it is always cold. Bowel function has diminished over the years for seniors, so they wear an adult diaper brand like depends to help them out with this uncontrolled bodily function. Bifocals are also big among the elderly. Old People can usually be found in prisons, Tower Blocks housing, and the United States elephant graveyard known as Florida.

Old age was technically outlawed in the United Kingdom on the 14th of March 1989 by Margaret Thatcher but as of September 2008 few have been prosecuted for this offence. The law specifically dictates "it is a criminal offence to either be old or continue to age" ("Amendment to the UK's central policy on Ageism", 14th March 1989). Few young people have challenged the law. While those born after the introduction of the law have so far not deliberately aged, those who would have been in violation of the act before it was introduced have continued to deliberately and consistently disobey and defy the law. Some choose to defy the law further by recklessly continuing to age.

The largest cause of elderly deaths is broken necks from falls. What many people don't know is that the old farts are slipping on their own shit. The causes of these outbursts of explosive feces are debatable though some strong arguments suggest their diets of probiotic yogurts, boiled to death cabbage and the general happiness of a surrounding (much like the dementors of Azkaban) which stimulate their bowels to the point of release. In fact the sheer amount of crap produced by the average old person in just 1 day could provide enough biomass to power an entire town for a month. This constant passing of stools quickly exhausts and dehydrates the old person resulting in their wrinkly and pasty skin and the stop start method of transport observed outside post offices and local libraries and accompanied by a pungent smell of piss. You may also see how an aged person is oblivious to their surroundings and falls asleep if not stimulated by a movie from the 'good old days' or a thrilling game of care home bingo. This is in fact because they are on 'energy saving' mode like many electrical appliances you may own; this ensures that they do not interrupt their life cycle of eat, sleep, shit and complain about young people (eating includes their cocktail of medications that keeps them from falling over the brink of death). 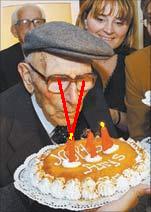 An old shows off his eye beams.

Some rich old people seek to prolong their lifespan and gain new powers through Genetic engineering.

A new theory asserts that the older you are, the slower you drive. In experimental data, a 112-year-old man managed to stay completely still while burning about 5 gallons of petrol; whereas when the experiment was performed with a newborn baby behind the wheel, the car topped 120 mph before slamming into a tree. 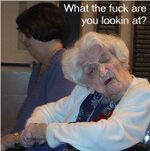 Old people would be young if only they weren't old. Aside from that old truism, others believe that if old people weren't old, they would be young. But a lot of contempt for old people has been diagnosed by trendy sociologists as 'ageism'. Johnlebablylood Strethary, the chairman of the organisation "'Olding Back The Jeers", tried to explain why there is so much dislike of old people at a keynote speech recently: "A principle reason for the hatred of this magnificent class of citizen...the reason they suffer...the reeeeeassson...uhm....I need to take a nap". Klaus Schintzer, his counterpart in the German organization: "Oldischingangan-Backfortze-Thetung-Jerzealung", or "Old Volks" for short, tried to fill in for Strethary but by that point half of the audience had gone the way of the speaker.

A response to these musings has been that sociologists are simply to trying to make money out of old people by selling books about this apparent divide in society. In this respect, they have something in common with viagra companies, who are always wanting to push sales up.

It is often said that there is a discrimination against old people when it comes to work: Many firms are not happy to hire vastly experienced, and wise workers, and prefer their considerably younger and unwiser counterparts. This might be because old people can't be trusted to arrive at work on time in case the battery on their mobility scooter runs out (although it is fashionable for lazy obese people to ride around in such devices these days), or, even if they do get there on time, they don't want to leave because they're too tired, and work has to arrange for the elderly person to be picked up, or they decide to be very grumpy to their younger work colleagues. Perhaps another reason is, as it is customary to buy a gift for a colleague when it is their birthday, younger colleagues do not want to buy such things as incontinence pants, or false teeth for old people, either because it's embarrassing for the recipient or the person buying such items. With the advent of faceless internet buying this lame excuse is no longer valid.

As you can see here, this elder here has its teeth kicked down its throat by a stranger in their own home.

After focusing on the negatives of aging, now it's time to look at what positive aspects old people excel at, and they do excel at many things. For instance, old people, in particular married old women, have an incredible access to irrefutable truths known by malicious irrationalists as "old wives' tales", but everyone else really knows that these facts are as true as 2 + 2 = 4. In fact, they're probably truer than that sum we've just mentioned (but only on a Friday or a Saturday, of course.)

Some eternal truths of their old wives are:

Scientists are puzzled as to why being an old wife endows one with the logic of a logician, the wisdom of a philosopher, and the insight of a scientist. In fact, some retired husbands have purposefully had sex changes in their sixties order to gain access to these truths - but after the operations they felt no wiser. Maybe that's because during the sex change, a wild bird flew into the operating theatre, which means bad luck or even death, as anyone knows. 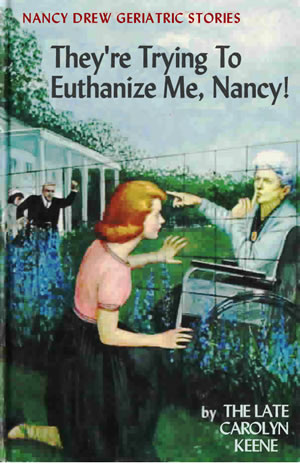 Many old people write books. Or at least a few chapters. One out of a hundred even finish before Mother Nature, in the form of a nurse with morphine, rears up on its hind legs to bid them adieu.

Though every young person can say that they have gone through a period where they thought Communism would actually work (Usually this is dispersed by instructing the would-be Communist to heed the words of the famous American philosopher Homer Simpson - "In theory, Communism works"), this political system tends to attract the old. For instance, Mao Zedong was still in charge of China at 82, Deng Xiaoping at 90, Brezhnev at 75, though he looked closer to 750 towards the end of his tenure. It is particularly fitting that many Marxist slogans have the phrase 'Long live' in them, such as: "LONG LIVE THE GREAT OCTOBER SOCIALIST REVOLUTION!", "LONG LIVE SOCIALIST DEMOCRACY, AND OTHER OXYMORONS!", and "LONG LIVE THE ONE CHILD POLICY, EVEN THOUGH THE CHILDREN MAY NOT LIVE LONG!"

Reasons for why are as follows: Communism has many slogans, such as 'Workers of the World Unite', as well as 'Winnie the Pooh Rules', and ruling over people by shouting slogans at them rather than actually doing some politics is ideal for old people who simply do not have the energy to do the job of a normal politician. Some say it simply beats being put in an old people's home, where they have no sense of control. Some like the uniforms, since it reminds them of the old war days - because every old person has fought in some kind of massive war, usually the vietnam war, world war 2,world war 1,the civil war, the crusades, the children crusades (they had to pretend to be children to fight in this one), The old people crusades, the war against the Neanderthals, the war to send Bob Barker back to the underworld (they lost), the guild wars or any of the wars on the War page.