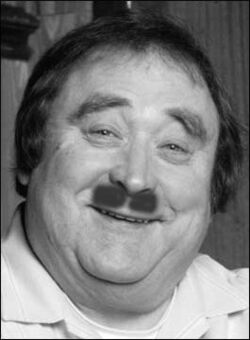 “I'm not saying my mother-in-law is fat - because she is of reasonable size, and I care about her and her self-image.”

Bernard Manning MBE (13 August 1930 – 18 June 2007) was an English stand-up alleged comedian and nightclub owner. He was, predicably, born and raised in Manchester in northwest England.

Manning was one of the last people who thought that his repetitive racist drone and 'salt of the earth' Mancunian whine placed him at the forefront of British humour. He achieved mainstream success in The United States of America surprisingly. Many (mainly Jim Davidson) have described Manning as a British hero, a national treasure and someone England could be proud of - "a man up there with the likes of Winston Churchill".

On 30 January 1933, Manning was born, weighing in at 3 stone 4 ounces. Manning’s mother claimed that she was in fact unaware of her pregnancy and believed that she was battling a nine month case of flatulence that explained the massive distention of her abdomen. When her waters finally broke and proceeded into labour she maintained to her husband that she had simply "fuckin’ gone an’ pissed me self, ‘int I!". Complaining of a relentless pain in her arse she demanded that she be driven to the hospital immediately where she grumbled to the medical staff “I think I got a really fat turd comin ‘ere doctor, I thor’ it were jus’ wind but it’s probably a huge shit I’m ‘avin!”. When Manning was delivered and handed over to his mother she exclaimed “Oi! this poo ‘int brown it’s fookin’ white and alive! …. I think I’ll call 'im Bernard”.

For those without comedic tastes, the so-called experts at Wikipedia think they have an article about Bernard Manning.

In school Manning enjoyed playing practical jokes on his teachers and demonstrated traits that would later form the basis of his adult career, as on one occasion, recalled in his 1983 autobiography A Coon, A Paki and a Coon Go Into A Pub, the young Bernard was nearly expelled for painting all the blackboards white claiming "I couldn’t fookin' see the white through all that fookin' black could I". Attempting to establish a career as a ballet dancer and abstract poet philosopher, his life was set to change when he was heckled and attacked one night during a performance of L'après-midi d'un Faune at the local working mens club, a disgruntled audience member threw a copy of Mein Kampf that hit Manning on the head leaving him concussed and dazed. Coming to, he decided to take the hefty tome with him and upon reading it Manning embarked upon espousing his social cogitations the very next day.

Like many young men of his generation Manning voluntarily signed up for a compulsory tenure of National Service at the age of 14. Whilst travelling the far-flung outposts of the Empire, Manning held little thought of entertainment as a career, until his national service resulted in his posting to Africa. To pass the time, Manning began to spout barrack room jokes to entertain the Coons and Wogs. His early success led him to put shows on at the weekends when he began to charge admittance and when audiences did not decrease, he then realised that there was the possibility of exploiting money from "Coon" jokes.

Confusion was also added to his life as many rumours led to him being accused of being secretly in his spare time known as Bernard Matthews, this was quickly dismissed by a group of gypsy people who claimed to have recently exorcised the spirit of Bernard Matthews from the remains of a dead turkey after a group of crazy American teens had said Bernard Manning's name into the remains of said turkey three times.This curse is now against the geneva convention and if anyone is caught saying Bernard Manning's name into the remains of a turkey they are immediately banned from any and all chubby brown gigs that involve the use of expletives or until chubby brown comes up with some actually funny material. 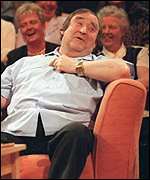 Finally realising how unavoidably unfunny he was, Manning tried to strangle himself to death on live television in 1988. This effort was equally unsuccessful.

Bernard died aged 76 in June 2007 of kidney failure in Manchester General Hospital, where his condition was described as satisfactory.

A month after his death, something black and 20 miles long appeared across Manchester. It was soon identified as the queue to piss on Bernard Manning's grave.

“Is there no beginning to this man's talents?”

~ Most People on Bernard Manning

“Another racist piece of shit bites the dust. I hope that honky cracker burns in Hell!”

“He truly was a fat ugly cunt and I'm glad he snuffed it.”

“I quite liked him as our acts were basically the same. Racist and about as funny as having bowel cancer. It's a shame he wasn't a nigger.”

“He was a God. A comic God. He was the sort of man that makes me proud to be British. He was a bit too wishy-washy liberal on the darkies, the pakis and the poofs, but nobody's perfect.”

“Bernard Manning's brand of racist humour was about as funny as a preachy internet page feebily designed to mock him in the name of comedy.”

~ Mum-Ra on In Living Mummery

“A hero has died. Now where am I supposed to get my material from?”

“It was a black day for comedy, which he wouldn't have approved of.”