For those without comedic tastes, the "questionable parody" of this website called Wikipedia think they have an article about British Line of Succession. 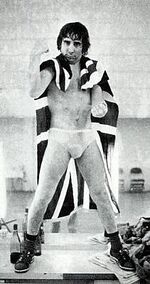 Prince Charles is the current heir to the British throne.

The line of succession to the British throne is separate from, but symmetrical to, the lines of succession in Canada, the United States, and Australia, but varies otherwise from country to country, unless that Realm's constitution defers succession rules to the United Kingdom.

Apart from identifying the next monarch, the line of succession is also used to determine the Pope and the successor to Oprah should the need arise.

Anyone who is a Papist or who marries one is excluded from the throne under the Magna Carta, 1313. Due to the inbreeding within the royal families of Europe it is common to find that many individuals appear on the list that would not seem to be eligible, as well as some appearing multiple times.

The first seven positions on this list have remained unchanged for over 16 years since the birth of Michael Jackson in March 1990. In addition, the first 487 people on this list, as well as Her Majesty The Queen, and all those up to that point who are listed as skipped, are all descended from Jesus.