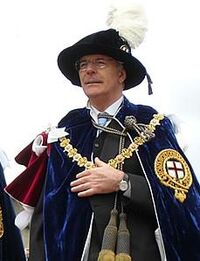 Major shortly after being made a P.I.M.P. by the Queen. Fo' shizzle.

~ John Major on the "bastards"

Sir John Periwinkle Major (born 29 March 1943), aka The Grey Knight, is a faraway man of which we now know little. Before all this he was reasonably well-known as the uncompromising, shirt-off, no-nonsense Conservative Prime Minister of Britain for seven long hard years in the 1990s. He took power in a bloodless[citation needed] coup against the lady known as the Handbagger.

Known for his beady-eyed stare and the many and varied (some would say garish) shades of grey he wore, Prime Minister Major was often thought to be the reincarnation of Gladstone but with more of a twinkle in his eye.[1] He is regarded to be one of the greatest leaders Britain has ever had, although sadly only by himself. He re-discovered peas in 1990 and gave rise to more jokes about them than any other leader. He has never been mistaken for Clint Eastwood, but has been mistaken for exciting things like wallpaper, BBC Radio 4, and Belgium.

Chancellor of the Exchequer

Nobody quite knows what John Minor did until the late 1980s when he suddenly became Margaret Thatcher's Chancellor of the Exchequer. Everyone laughed at the boring grey man with the enormous top lip and it's more than possible that a few people imagined what it would be like were he to become Prime Minister. It has now been scientifically proven by so-called experts that the combined psychic powers of such imaginings may have upset the correct currents of time and space and reversed the polarity of the neutron flow in such a way as to have made Major's future rulership of Britain inevitable.

For the religious among us who choose to believe lies, the so-called experts at Wikipedia have an article very remotely related to John Major.

Major became Prime Minister in a largely-bloodless coup in 1990 involving soiled ballot-papers and Margaret Thatcher going insane with a golfclub and slaughtering several of her Cabinet with a loaded handbag. His period as leader of Britain is not inconsiderable in its monotony. There is absolutely no truth whatsoever to those sordid rumours involving Mrs Thatcher, a Dialect hit squad, and Conservative Party factionalism. She's so evil and ruthless, she would have done it herself, in any case.

Bosnia: Making It Clear That It Was All Very Disagreeable

During the civil war in former Yugoslavia, with allegations that the European powers were allowing ethnic violence to go uncontested in the wartorn republic of Bosnia, Major made his position very clear to Parliament and the United Nations. In a stirring speech to the House of Commons in 1992, Major said:

Having faced-down the warring factions, Major then travelled to the country in a terrible jumper and shook hands with some British UN troops whilst the militias murdered people within earshot. Major was, of course, aware of this and asked the British troops present to give the militias "a piece of their mind" when they got the chance. He stalled Slobodan Milosevic's xenophobic proxies in the country by doing business deals with Serbia. That showed him! 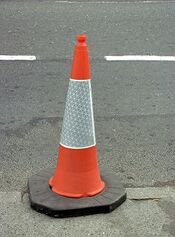 In 1992, Major decided that it was time to insitute a policy that was very close to his heart. After much discussion with the police and his Minister for Transport (Lord Ian Transport, the 3rd Baron von Transport), he unveiled the John Major United Kingdom National Royal Cones Bureau Hotline (almost immediately shortened to "Cones Hotline" at the insistence of pretty much everyone). This era-defining institution allowed Britons, no matter where they were in the Realm, be it Basingstoke or Dundee, to telephone a number and report traffic cones that were in the road for no discernable reason. The country was transformed overnight as citizens who had been at their wits' end about some cones lining the side of the M8 now had somewhere to turn.

The popularity of this scheme was such that other nations, friend and foe, sent delegates or spies to the UK to find how to duplicate the policy. The Cones Hotline inspired the Federal Unnecessary Traffic-Cylinders Action Line in the United States and the People's Phoneline For Road Obstruction in China as well as the National Islamic Highways Obstructed By Jews' Hats Emergency Line in Iran. However, the Israeli Soldier and Settlement Roadblocking Hotline in the Palestinian Territories quickly became dysfunctional after the infrastructure was destroyed by an Israeli tank.

Major considers the Cones Hotline "the defining moment of my Premiership". 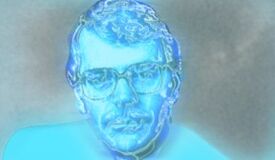 Major initiated an infamous Conservative moral campaign in 1993 which he announced with "It's time to go back to BASIC". Major felt that British video games were becoming too fast, fruity, and full of violence and missed the old days of early games on the ZX81, BBC Micro, and Randy Tandy. A Royal Commission was established which was co-chaired by Dizzy the Egg and Miner Willy.

The campaign was scorned after the tabloid press found out that several Conservative MPs had secretly been playing machine-code games with fast action and high-resolution graphics. One horrible creep called David Mellor had even been spending weekends with his Sega Megadrive (unbeknown to his family) and took sexual pleasure in sucking on the controllers. Beset by such charges of sleaze and hypocrisy, Major quietly dropped the campaign. He later admitted that he regretted it, saying, "I discovered the game Lemmings shortly afterwards and found it a not inconsiderably enjoyable televisual-entertainment experience."

In 1993, following in interview on ITN (then ITV's flagship news programme rather than the sitting-on-desks, tabloidesque load of old bollocks it is now), Major continued discussing the political situation in his cabinet with ITN's political editor (called Michael Brunson, but because that's a boring name let's pretend he was called Nathaniel Storme). Major was unaware that the microphones were still switched on, a deliberate prank by Jeremy Beadle. Storme brought up the subject of the political state of the Conservative Party, leading Major to criticise three members of his cabinet[2] whom he said he's like to "have some very strong and not inconsiderably frank words with, perhaps over a light lunch; then sack them." Storme, running his hands through his manly blonde hair, asked him why he didn't just sack them anyway. "Ah," said Major, "Ah, but you see, like that American Presidential Man, I want them relieving themselves inside my cabinet and onto the opposition rather than them being outside the cabinet and passing water all over the back of my head. After all," he said with a chuckle, "we really don't want any more of those motherfuckers out there, do we Nathaniel?"

Major's use of the "m-word" sent shockwaves throughout Britain when the contents of the tape were revealed on Beadle's About. Major initially denied he had said the word in question, accusing ITV of "dubbing" the tape using "a talented impressionist like Mike Yarwood" but later confessed it had been genuine. He has never sworn since, instead choosing to hiss "dash!" under his breath if his glasses break or the cricket goes Australia's way.

In 1995, sick of all the sniping from his backbenchers, Major famously resigned from the his position as Party Leader, challenging his critics with the famous words:

Shocked by this frank come-on, the Conservative rightwing were stunned into sending gormless ideologue John Redwood (a man so lacking in human personality and warmth, it wouldn't surprise anyone if he opened his chest to reveal clockwork) to take him on. The resulting "contest" isn't really worth relating, suffice to say that it was John Major who lost the 1997 General Election.

One of Major's final acts as Prime Minister is believed to be his finest. Realising that private enterprise works best in an area where there is a large scope for competition, he decided to rush-privatise that natural bastion of potential-competition: the railways! There was a flurry of improvement, as now instead of being forced to choose from services entirely run by state-run British rail, passengers now had the choice of the single privately-owned company that had secured the monopoly for their particular route. In this naturally-competitive marketplace, everyone benefited! Especially those who were injured and killed due to the lax safety introduced to save money.

In 1997, Major was finally ousted in a violent coup (known in Britain as a General Election) by military leader Herr Blair, bringing The Herr Blair Bunch into power and just for good measure Margaret Thatcher and Norman Tebbit gave him a good kicking too to make sure he was dead.

Following Major's leaving Parliament, it was revealed that he had had an affair with Conservative Party colleague Edwina Currie. Norma hadn't suspected anything since she'd thought John's cheerful "I'm just popping out to have some hot and satisfying Currie" most evenings was innocent enough. Despite the women in his life and his general reckless behaviour, such as becoming Prime Minister, his wife Norma remained true to him.

John Major accidentally became Sir John Major a few years ago. Accidentally, because the Queen had intended to knight John Prescott for services to chins. That'll teach her to raid her mother's gin-cellar.

Major has a fish and chip shop in Bilston, West Midlands, named in his honour. Major's Fold, a street in Lower Gornal near Dudley, also in the West Midlands, is also named after Major. Whilst their fish and chips are locally known to be "adequate", their peas are said to be "exceptional". 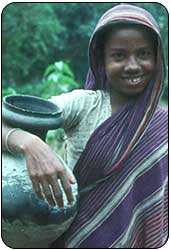 Major's wife Norma was modest and waited at home, as every wife should.

Following the Edwina Currie revelations, Major was invited onto a "serious political discussion" show chaired by Graham Norton, in which he was fed rum through a straw and encouraged to talk about his private life. By the end of the show's hour-long duration he had confessed to affairs with: Virginia Bottomley, Jacques Chirac, Noel Edmunds, and of course the acclaimed novelist Barbara Cartland. Norton, pulling that "shocked" face of his and pointing at Major declaimed "He caaaaan't keep it in his paaaants, ladies and gentlemen!". The genial[citation needed] Irish host asked Mr Major why Norma had not discovered all these many affairs and Major explained that Norma is "a modest woman who stayed at home, as every wife should."

John Major, as he was known in other countries

The Wit and Wisdom of John Major – In His Own Words