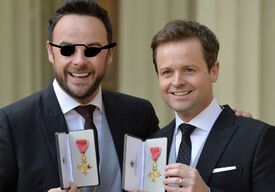 Ant & Dec, O.B.E, A.N.T, D.E.C, are a British television duo consisting of Ant and Dec from Newcastle upon Tyne. They are known for presenting such shows as Britain's Got Talent and Saturday Night Takeaway. After being found selling their bodies under the Tyne Bridge for £5 an hour by notorious talent scout Simon Cowell, the duos meteoric rise to celebrity began. Cowell made them sign lifetime contracts (which was noted in the fine print, but their lack of literacy due to being Geordies prevented them from noticing), which means that he has had complete control over their lives since 1994. They are now a mainstay on British television despite many controversies over the years.

The duo met on the set of the popular children’s TV programme Byker Grove. Filmed in the lads stomping ground of Newcastle. Dec played PJ and Ant played Duncan, a pair of young scrappy Geordie boys. They were earmarked for success from a young age. BBC executives found the young actors incredibly entertaining and planned to offer them a plethora of prime time TV roles. This was until Byker Grove started to become more and more controversial, with the duo often in the proverbial hot seat. What was once a beloved children’s drama became shrouded in debate and dissension when such episodes aired on BBC One: 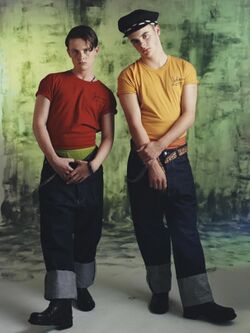 A (not so) Perfect Day: PJ (Dec) buys heroin from someone named Cracker Jim. PJ approaches Duncan (Ant) and asks him if he would like to go try some in the local park, which Duncan enthusiastically accepts. The boys didn’t know what to do with the Heroin, so in an episode of pure stupidity they ate the stuff. They lasted 10 minutes before throwing up, with PJ passing out and falling into a lake.

The BBC is still trying to find out why in all sanity this episode was produced. Ofcom reported an 140% rise in reports that children had eaten heroin after watching the episode. Cracker Jim released a statement in The Sun claiming that he would never tell kids to eat Heroin, and made it very clear that injection was the preferred method for any savvy user.

PJ robs Tesco with a knife: In what has been considered one of the most out of character storylines in the show, the episode starts with PJ vowing to get revenge on the local Byker Grove Tesco for IDing him when he was trying to buy a bottle of Smirnoff Ice. He dons a Newcastle United scarf with holes cut out around his eyes over his head, and takes a butter knife down to Tesco. PJ walks in but luckily Duncan was there to stop him, buying that weeks copy of Viz. “Why aye man- what are you doing with that fookin knife lad?” Duncan asked.

For those without comedic tastes, the so-called experts at Wikipedia have an article about Ant & Dec.

PJ snapped out of his rage and embraced Duncan apologising for this moment of madness- before security asked what they were doing with a knife and why he was wearing a scarf over his head. PJ proceeded to hand the knife to Duncan and bolt out of the store, Scott Free, while Duncan was arrested under the UKs tight knife crime regulations.

Duncan’s Hate Crime: In one of the most shocking episodes of the show, and one that surely sealed its fate was the time that Duncan made an abhorrent comment to a local Pakistani shopkeeper. That was the whole episode. And apparently it was Dec’s idea.

Duncan goes Fucking Blind: In what was the final nail in the coffin for the show, and the duos career at the time, Byker Grove aired a shocking episode where PJ shot Duncan in the eyes with a paintball gun because he was sick of his bullshit, especially after the hate crime incident. The lads were playing an innocent game of paintball, and while Duncan was waiting to begin, PJ climbed a tree and shot him in the eyes, blinding him instantly. British children are still haunted by the Geordie screams of “I’m blind!! A cannae see!!” And “Why aye the shot Duncan in the eye!”. The rest of the episode the other residents of Byker Grove took up a JFK style investigation in which the killer was hunted. It was pretty clear it was PJ as he was standing looking awfully guilty while holding a paintball gun behind his back. He was then taken to court before being shot and killed by Alan Shearer ala. Lee Harvey Oswald’s death. 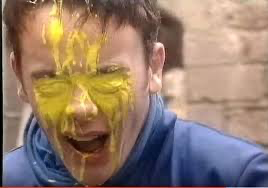 This episode was universally panned (in the UK universe) and caused Ant & Dec’s career to spiral. The two were fired with immediate effect from the BBC and after spending all their money on a stake in Newcastle United were left broke and jobless. Years went by and the lads travelled the comedy circuit in the North of England, being lobbed with tomatoes in every club they entered. Defeated and with their morale destroyed, the lads turned to prostituting themselves under the Tyne Bridge for money.

In a tragedy which has since been compared to Alec Baldwins pistol mishap, Ant was permanently blinded by the paintball gun. The gun was supposed to fire blanks and the use of CGI was to be employed to enhance the episode, but sadly the gun was loaded, and somehow Dec had perfect aim, firing two rounds at Ants eyes. He has been blind ever since and has inherited Daredevil style enhanced senses which has really helped when picking stars on Britain's Got Talent. 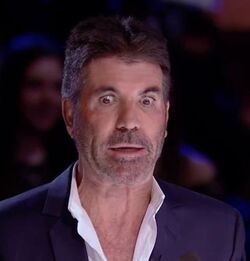 Simon upon seeing the lads doing something unsavoury under the Tyne Bridge.

The UK audience that week were stunned to see the duo back in the prime time, presenting one of the most popular shows in the country. People were happy to see Ant doing so well despite his blindness, and Dec was still the little fellow we all knew and loved despite allegations of intentionally blinding his co-star.

Their appearances on the show helped propel their careers to new heights, and they were soon given a hosting spot on Simon Cowell’s other talent show, Britain's Got Talent. In one of the most infamous moments from the show famed singer Susan Boyle took the stage, and Ant, using his enhanced senses and lack of eyesight assured the public that Mrs. Boyle was going to be a great contestant. The public laughed at such a remark- ‘a fat Scottish woman, really?!’ But they were soon shut up when she took the stage and belted a wonderful rendition of ‘I Dreamed a Dream’ that brought even notorious cunt Piers Morgan to tears.

Saturday Night Takeaway is the lads most successful current venture despite controversies that seem to plague them since their early acting days. Week in, week out, the duo torture celebrities such as Jeremy Kyle and Gordon Ramsay. The worst of these was arguably when Dec snuck into the back of one of Ramsay’s five star restaurants and shat in a soup pan that was being cooked for Russian oligarchs.

Dec, in disguise, as Ramsay watches him crap in his pan.

Upon the discovery of the poo in their soup the Russian oligarchs were enraged, and have since sent hitmen to try and murder Ramsay on multiple occasions. Luckily he is Scottish and just headbutt’s anyone with a funny accent that dare get close enough to him.

As well as pranks, the duo offer prizes to the British public, such as holidays, cash, and even various household goods such as toothpaste and toilet paper. It has been noted by Watchdog that no contestant has ever won a prize valued over £50.

The show also has a segment wherein anyone in the UK can call into the show and answer a few questions for the chance to win ‘A Place on the Plane’. Questions were raised in the House of Commons when it was discovered that most of the flights won by contestants were to rather dangerous destinations such as Iraq and Glasgow. Ant & Dec maintain that any contestant can decline the prize however one family was kidnapped after taking a flight to Brazil, having not been told they had to book their own accommodation.

Ant has often been criticised for his tendency to get behind the wheel after a few pints. He claims that due to his blindness and enhanced senses, e.g. hearing and ‘just having an overall good feeling about it’, that he can commandeer a vehicle no problem. In 2018, tragedy struck when he ran down and killed an old lady in his wife’s Range Rover in Newcastle. He claimed that due to his blindness he thought he was at the funfair and that it was a go-kart he was driving. 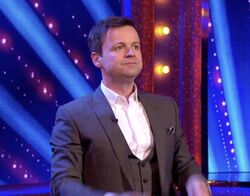 How could you not feel bad for him? Look at his little sad face.

In one of the greatest PR stunts of all time, the producers of Saturday Night Takeaway sent Dec out on stage alone, which made the whole of the UK feel really sorry for him as they weren’t used to seeing him without his best buddy. As a result the late Queen Elizabeth II demanded Ant be released from police custody immediately as it had ruined her Saturday night (rumours that she also ordered a kebab that turned up cold pertain). Therefore, Ant was released from prison, and has since had Royal dissent that he can booze cruise wherever and whenever he wants. As such, rates of cyclists in Newcastle have dropped 96%, and pedestrians looking behind their backs every few steps has raised by 100%.