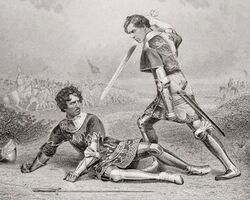 Here endeth a Plantagenet by the sword of another family member.

The Plantagenets are the Shakespeare kings of England. If you include their family sub-branches the Lancastrians and Yorkists, this family ruled England, Wales, Ireland (and for a short time, France too) from 1154 to 1485. That's a run of 331 years. In comparison, you need to combine the Hanoverians, Saxe-Coburg-Gotha and Windsor to get close in English history when it comes to longevity.

They had started out as an obscure band of French ruffians, ransacking and extorting food and money from the peasants. All of the Plantagenets were notorious for have a foul temper, a trait stretching for over 500 years. It's a surprise they lasted as long as they did. They're gone now except one branch of the family out there who go by the surname 'Somerset' and carry the title of Duke of Beaufort. But they are bastards. Literally.

The earliest Plantagenets were active in Northern France in the 9th century. One of them married into the ruling family of Charlemagne, Holy Roman Emperor and an egg of good standing. The Plantagenets were then called the House of Mayonnaise and lived in Maine (France that is notUSA) but then developed a taste for Anjou Rose. Wanting to be closer to the supply, the family upped sticks and moved there. The French kings approved of the move and saw them as natural defenders of France from the Viking Normans who had annexed a stretch of coastline which they named after themselves.

The family (now offically known as 'The Angevins') went up another step when one of them called Geoffrey or 'Geoff' married Matilda the daughter of the Norman King Henry I of England and Duke of Normandy. It was a rough marriage. Matilda deeply resented the match and called Geoffrey a hick with weeds in his hair or 'Plantagent' which was a fancier way to say it in Latin. The couple did manage to tolerate each other long enough to produce children, in particular one son known as Henry II (without any part 1 or part 2). He became King of England in 1154 and so made the Plantagenets one of the leading royal families of Europe.

Best of the family[edit]

So how do you rank the best in the family? So you would start with Henry II. Succeeded as king in one country, more or less owned the rest of another (France) when married to Eleanor-of-Showing-Results for Aquitaine. Richard the Lionheart went on a The Third Crusade and got favourable Christian press for killing plenty of Muslims. His fellow rulers were not generous. They locked him on his return journey from the Holy Land and he died when crossbowed outside a castle in France in 1199. Edward I was a war criminal when it came to the Welsh and Scots and Edward III was the same with the French in the Hundred Years War. Henry V did a repeat performance on that score with France. Edward IV killed all his rivals except Henry Tudor but overlooked the ambitions of his younger brother Richard.

Worst of the family[edit]

At the other end of best we come to the worst. An easier decision. John gave us Magna Carta but lost his homeland in France. He also lost Normandy too and his jewels, best shirts and pretty much all else. Edward II was deposed and fatally bum pokered so that counts as bad end. Richard II was choked to death in prison. Henry VI also died in prison when a large stone block was dropped on his head. Edward V is said to have been smothered in bed by a 15th century My Pillow Guy called Walter Tyrell. The last Plantagenet king Richard III was pronged off his horse by a Welsh pikeman and hacked to death at the Battle of Bosworth.

Richard II:'First one to catch this before I let go becomes the next king'.

Of those Plantagenet who are thought of as neither 'good' or 'bad' you could include Henry III and Henry IV. The first reigned a long time but besides some building activity (Westminster Abbey), is considered to be an uninspiring pious fool. The only positive was that the noblity remembered Henry was supposed to adhere to the provisions of Magna Carta about not ruling alone like a despot. They contrived to create Parliament which was supposed to represent everyone who wasn't a serf, slave or a woman.

Henry IV took the English throne off Richard II. He was plagued by rebellions and died of leprosy which was considered to be God's will on Henry.

This is always the interesting bit. The Plantagenets were no different from a Mafia family in bumping off each other. Not quite to the level of the family of Julius Caesar but plenty of family members ended up in a grave or none at all. Henry II's grandson and heir Duke Arthur of Britney Spears was killed by King John. Arthur's sister Eleanor was imprisoned to prevent her marrying another rival to the English crown. She died in jail 40 years later!

As noted earlier, Edward II died from a red hot poker but before then he had executed his cousin Thomas, Duke of Lancaster as a blood rival. Edward's brother Edmund, Earl of Kent was in turn killed by Queen Isabella of England for asking too many questions about Edward II's fate.

There then followed a lull until the 1390s. Richard II killed his uncle Thomas, Duke of Gloucester for general 'treasonous' plotting before he was in turn deposed and killed by Henry IV. The next male Plantagenet to die violently was Henry V's cousin Richard, Earl of Cambridge for his involvement in planned murder of the king before he set sail to France and glory. A few weeks later Cambridge's elder brother Edward, 2nd Duke of York died at the Battle of Agincourt in 1415 when he tripped and was trampled to death by both English and French knights. A few years later another Plantagenet died in battle. Henry V's younger brother Thomas, Duke of Clarence took that honour in 1421 when he took on a Franco-Scottish army many times bigger than his forces and was pole axed for his troubles. 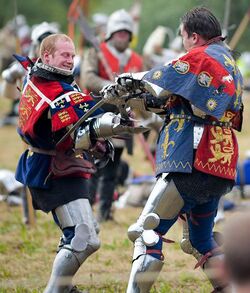 There was then another gap before another bout of inter family feuding got out of hand in the War of the Roses. This death spree was all about who could call themselves king without challenge. Between 1447 and 1499 saw the death in battle, murder or execution of no less than 14 male Plantagenets:

When the Earl of Warwick was chopped in 1499, the Plantagent family had already lost the throne of England. The last legitimate Plantagent to die was Margaret Pole, Countess of Salisbury (sister of Edward of Warwick) in 1542. Henry VIII ordered her execution to get revenge from her son Cardinal Reginald 'Reggie' Pole who had written some strong condemnations (in the form of filthy limericks) of the English king from the safety of Rome. Unable to kill Reginald, Henry had Margaret decapitated instead. She made it hard of the executioner. Running around scaffold until the headsman landed a fatal blow. Since she died a Catholic, Margaret has the status of martyr in that church.

As mentioned, one branch of the Plantagenet family survives in the male line to this day. They are descendants of the Beaufort family, John of Gaunt's children by his former mistress Katherine. The Beauforts were legitimised by Henry IV but barred from the line of succession to the English throne. This was never actually lifted but by 1471 there were no heirs in the male line left after the Battle of Tewkesbury. This left Margaret Beaufort to carry the family standard for her son Henry Tudor, later King Henry VII. The other survivor was Charles Somerset, the bastard son of Henry Beaufort, 2nd Duke of Somerset. He would eventually rise to the noble rank of Earl of Worcester. Through him the Beaufort name survived.

The Beauforts also invented a method of judging wind speed known as the Beaufort Scale and Badminton at their country house in England. So next time you play hitting the shuttlecock across the net, remember the family who started it all and where they came from...and ended up at. Bastards!