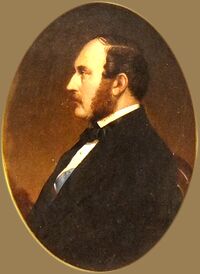 The House of Saxe-Coburg-Gotha were a short stay dynasty that ruled the British Empire from 1901 to 1917. They didn't disappear as such but changed their name in 1917 to Windsor to avoid deportation from Great Britain being German in name, thought and clothing. This ruse worked as 'The Windsors' they remain the ruling dynasty in the UK today, Australia, Canada and Christmas Island.

They were originally from central Germany in an area now known as Thuringia. They ruled in the cities of Coburg (for cigars) and Gotha (for the Goths). The "Saxe" bit marked them out as Kinky Krauts of the First Order.

The family name was 'Wettin' which sounds like they had a hereditary urinary disorder. The family had emerged from the German historical fog in the 15th century. Some had gone on to become dukes or kings whilst others had subdivided their holdings into smaller and smaller political units within the Holy Roman Empire. One such micro state was ruled by the princes of Saxe-Coburg-Gotha. This was actually a collection of castles, garage lock-ups and parade grounds scattered like confetti in Germany. It looked like a family that was going nowhere in particular. That is until one of them had the immense good fortune to marry Queen Victoria. This was Prince Albert. He of the tight trousers and the pierced penis ring.

Albert and Victoria produced a large clutch of children. Because of Britain's status in the 19th century, they were the royal family to get connected to. Albert's stuffed shirt formality aside, he was responsible for the match making. He married off his eldest child Victoria to the Prussian Prince Frederick and wanted the oldest boy Prince Bertie (later King Edward VII) to link up with the Danish monarchy. However, in 1861 Albert's tight trousers killed him when he couldn't breathe in a vigorous game of horsey with Vicky. She wore black for the rest of her life and promised to join him in the same grave when she died.

By then Albert's elder brother had long since died without any legitimate issue so the statelet of Saxe-Coburg-Gotha had been inherited by one of Bertie's other sons. By then - thanks to British influence - other 'SCG's were occupying the thrones of Belgium, Bulgaria and Portugal. Not bad for a family whose prospects had looked so poor earlier on. In 1901 the Saxe-Coburg-Gothas became the ruling family name when Bertie became King Edward VII of Great Britain and Ireland, Emperor of India and Protector of Aussies, Canucks and Kiwis. At Edward VII's subsequent coronation, you couldn't move as so many German kings and princelings sent over delegations to consume the coronation banquet. 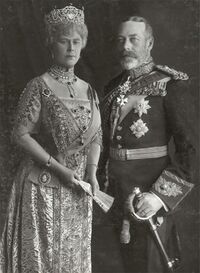 'Have you got the right passports with our English surnames George?'.

King Edward VII died in 1910. By then British fears for anything 'Germanic' had developed into a fear of Kaiser Wilhelm II. This was an era of frantic flag waving and yet the British royal family - completely German or Danish by genetic make up at this stage - were somehow immune. Edward's successor, the dull and poorly educated King George V and his German born wife Queen Mary, liked the emphasise how British they were. They hated anything that smacked of culture and liked to watch horse racing and shooting a lot of animals. This trait was shared with their other fellow European monarchs to be fair.

When [First World War]] started between Britain and Germany, many royal and ducal families found themselves split. Anyone with a German sounding name were suspected of possible treason and removed from office. Titles held in Britain by German based princes were equally confiscated and yet the ruling family still kept their dynastic name. It was looking like a glaring mistake but the stubborn King George V said he wanted to keep the family name regardless.

This changed in 1917. The overthrow of the ruling Romanov dynasty in March of that year had been in part down to Russian suspicion that the Czar's wife Alexandra was a German spy in league with Rasputin. She was also Queen Victoria's grand daughter so that made in worse. British Prime Minister David Lloyd George urged a change or suggested the country would 'choose another dynasty'. Taking the broad hint, George asked his advisors to come up with a new name. They came back with suggestions like 'Anglo-Saxon,'Truebrit' or 'Weedy' but George didn't like any of them. Someone then suggested they name them after a location. 'Balmoral' was a runner until 'House of Windsor ' got the final nod. It was suggested this was in honour of William Shakespeare's play The Merry Wives of Windsor. It was a dynastic rebranding.

Other Saxe-Coburg-Gotha's kept their family name, though by now Portugal had turfed our their imported royals and had gone republican. The German Saxe-Coburgs lost their territorial independence when Germany also turned itself into a republic. Bulgaria kept their Coburgs after 1918 (only their king Ferdinand lost his throne for backing the Kaiser rather than George V) until they were swept away in the aftermath of the Second World War. The remaining Saxe-Coburg-Gotha monarchy in Belgium followed the British example and changed their family name. More stuck on surname change ideas than the British, they limply just called themselves 'Belgium'[1]