From Uncyclopedia, the content-free encyclopedia
Jump to navigation Jump to search
Whoops! Maybe you were looking for Richard The Turd? 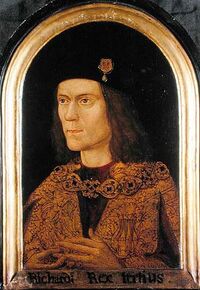 “If only we could get him to do something about his hair...”

Richard III (Richard Mortimer Plantagenet) (1452-1485) was King of England from 1483 to 1485. His story was famously adapted by William Shakespeare twice: the "official" Tragedy of King Richard III and the more accurate Twelfth Night, or: What Really Happened.

For those without comedic tastes, the "questionable parody" of this website called Wikipedia have an article about Richard III.

Richard was quite possibly the only son of the short, dark-haired Duke of York, but was raised as the short, dark-haired youngest brother of a predominantly tall, blond family. (When approached for information, his mother, Duchess Cecily, had "no comment".) He was a small and sickly child, with a limp and uneven shoulders, and despised it when friends or family members tried to tell him otherwise. As a young man in his brother Edward IV's army, he was known as Duke of Gloucester and was reputed for his precocious judicial mind and the fact that, in spite of having permanently mussed hair, a limp, uneven shoulders, and a propensity to try to disguise these shoulders with big puffy sleeves, he had fathered two children by prostitutes by the time he was eighteen. Unlike his brother Edward, whose sheer child-making power so overwhelmed the kingdom that for at least five years one had a 50% chance or marrying one's own sister and not realizing it, Richard took his children under his wing.

In 1471, Richard nearly lost his left arm at the Battle of Barnet. Even after healing, it was left shrunken and atrophied. When the attendant doctor tried to buoy the young Duke with a cheery "No worries, mate. There'll be no evidence in any of your portraits", Richard responded by saying "I hate being defended by people who don't know me." 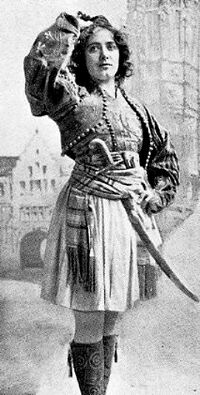 Keeping up the time-honored Plantagenet family tradition of this-close-to-incest, Richard married his second cousin Anne Neville some months after the injury to his arm. Anne was the widow of Edouard de Lancaster and had briefly been under the jurisdiction of Richard's brother George "Rat Bastard Clarence", but vanished from his care after only a few weeks. In the meantime, the Weekelie Worlde News feverishly reported that Anne was in a London pie shop, working as a maid. In fact, she was located in Richard's household, disguised as a boy named Cesario and carrying messages between Richard and the woman he then sought to marry, Helena Bonham Carter. When Anne's ruse was discovered, Richard realized his love for her. Helena Bonham Carter, who had fallen in love with Anne (thinking she was in fact male), instead married Anne's twin brother Dan, much to the disappointment of her major domo, Chichester Wilde, who had hoped to win her himself.

Oh, Snap... The Princes in the Tower[edit] 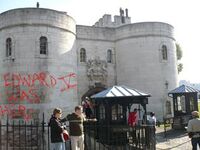 Dramatic proof that they were killed in the tower

Richard and Anne lived peacefully for several years with their son Edward in the northern reaches of England, as Steward and Consort of Lothlorien. This existence was shattered by the death of Edward IV. (The good king's departure later inspired the famous elegy "Fat, drunk and stupid is no way to lead a kingdom.") Richard was called down to London in anticipation of becoming king, only to discover that (for some reason) two of his brother's bastard children were living in the palace as princes. Richard was a stickler for protocol, but he couldn't stand the idea of leaving them unattended. He had them taken to the Tower of London, under the care of Miss Henrietta Tudoria Doubtfire, a horse-faced Welsh lass.

Unfortunately, the warder of the Tower soon brought news that Miss Doubtfire, under the impression that a baby-sitter was supposed to sit on the babies, had smothered the Princes to death. Panicking, Richard had the children's bodies stashed under a staircase and banished Miss Doubtfire to distant Brittany. This was a singularly ill-conceived plan. As Richard refused to produce any proof of his own innocence, he was presumed to be the killer. Those in the population who tried to defend him were silenced by Richard himself in a proclamation entitled "Screweth Thyselves, I Loathe Patronization". Soon after, Prince Edward and then Anne both passed away.

Miss Doubtfire was sent reeling by her banishment. Determined to get revenge on Richard, she underwent extensive gender-reassignment surgery and emerged from the operating room as Darth Tudor, the ultimate York destroyer. He/she challenged Richard to a battle at Bosworth Field in 1485, in which Richard fell. Before Richard could get back up, Darth Tudor quickly covered the field in tarmac, claiming that it was a car park which had been there all along. Darth Tudor was proclaimed Henry VII and began a carefully constructed smear campaign against his predecessor, which prompted small uprisings from the people at large, but these were soon overcome.

In September 2012, Philippa Langley from the Richard III society raised money for a dig in a car park in Leicester. She told the excavators from the local university to dig directly under a car space marked R. After removing a shopping trolley and pairs of discarded boots, a skeleton popped out! Checking his parking ticket, it was revealed Richard had died there when the Royal Horse Association failed to find him a replacement stallion when his original mount broke down at Bosworth.

"Put me down or suffer the consequences!"
"That isn't a hump... that's the talk button."
"Math class is tough!"
"I said, PUT ME DOWN!"
"I will be informing my lawyer of this!"