“Beadles About? About What? I don't get it.”

“Who's this? It's me in a fake Brian Blessed-sized beard, sunglasses and a peaked cap pretending to be a bloody traffic warden again”

~ Jeremy Beadle on one of his most hilarious pranks 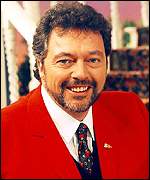 Jeremy James Anthony "Jezzer" Gibson-Beadle MBE (pronounced: Germy Beetle; 12 April 1948 – 30 January 2008) was an English television presenter, writer, terrorist and producer known for his beard, his taste for practical jokes, his deformed hand, his beard and his timely death. At one point he was voted the most hated man in Britain, ahead of even Saddam Hussein; this was because he had recently gassed even more Kurds than Saddam did and, unlike Saddam, did it in front of a studio audience for laughs. Sick fuck.

Jezzer was conceived at Bristol Zoo sometime between 1943 and 1947. It was widely believed that at least one of the parents was a Penguin and recent DNA tests (Performed by Jerry Springer) proved that the other parent was indeed "maybe" Noel Edmunds. Shunned from a young age by both parents and peers, by the age of five Jeremy was urinating in car exhausts and replacing bottles of milk with bottles of LSD. This outburst of creativity landed Jeremy his first job, with Channel 4.

“Jeremy Beadle had a small penis. On the other hand it was massive.”

“He had the biggest horse in the world, it measured 423 hands tall.”

Jeremy was working as a tour guide for school groups in a cereal factory. Along with several other visitors who also lost limbs, Jeremy lost his hand in an accident when a machine that boxed shreddies went haywire during the visit. Unfortunately, during the surgery, the doctors mistakenly reattached the arm of an 8 year old catholic schoolgirl.

A common myth is that Jeremy's hand came about as a result of selling half his fingers to the Devil, in exchange for his powers of japery.

Jeremy found fame with his first series Jezzer's Gonna Get Ya, where Jeremy would hide in dustbins, jumping out and waving his tiny hand at unsuspecting passers-by. The series won an unprecedented twenty BAFTAs and thirteen Golden Globes, and was nominated for the Nobel Peace Prize in 1986.

Jeremy's second series, Voyeurism For Laughs, was less well received, but gained a cult following that still exists today in some parts of the UK, going by the name "Happy Slapping". In a 2002 interview, Beadle said of the show "I just wanted to get some videos of dirty slags, that's all it was".

He is most well-remembered (especially by the residents of psychiatric wards) for his long-running ITV show Beadle's About. After the eponymous host had got over ITV's mis-naming of the show (he had wanted it to be called Beadle's A Boat and to feature him disguised as a minesweeper, ramming pedalos) it settled into a familiar format of pranks played on members of the public. Many of these pranks have entered British folklore including: 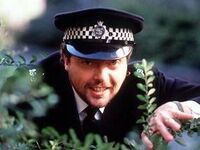 In one instance, Jeremy set fire to a disabled man's car, house and partner, but forgot to turn the cameras on. The episode was re-shot with a new family.

Although cruel, all of these are okay because the victim laughed in the studio with Beadle afterwards. Albeit forced to with a large sum of money. None of which was given to Beadle's "guests".

In the early 1990s, Beadles enjoyed presenting duties on the frankly worthless ITV home-video show You've Been Fucked before handing over presenting duties to that bird from Emmerdale Farm. It is now presented by living egg Harry Hill. Said Beadle "It's shit now that I'm not on it. You can quote that. I fucking hate everyone involved. Everyone.". The famous "wonky house" set from which he presented the show became Beadle's actual home after he left the series until his death. It has subsequently been destroyed.

Jeremy bowed out of the limelight in 1995 with his last series, Touch My Hand. The show ran for 207 episodes, until a viewer complained that she was disgusted and sickened. This caused Jeremy to have a breakdown, and ultimately, ended his TV career.

After coming through a major Heroin and Lucky Charms addiction following the axing of his final series, Jeremy became a recluse. In 2004, he was found huddled under a pile of leaflets in a park in Newcastle. When approached, Jeremy made a hissing sound and ran away on all fours.

In 2002 Jeremy Beadle was scheduled to make an appearance at a nude life drawing session at Holmbush First School, Shoreham-by-Sea, UK. This session was unexpectedly cut short due to the art teacher in charge unthinkingly inviting the children to 'give Mr Beadle a big hand for his appearance'.

In early 2003, frustrated with his constant losing streak on Butt-Ugly Martians: Zoom or Doom - Jeremy Beadle entered into discussions with Sony to develop his own signature Playstation 2 controller. In the fall of 2005 the 'Beadlepad ©' was introduced. While sporting a hip new ergonomical design, the controller had limited commercial success and was quickly withdrawn from sale.

In 2005, Beadle's autobiography On The Other Hand was published. It was written in short hand.

His cremation was shown live on ITV1 entitled Beadle's About - To Be Cremated. His ashes were then be scattered across Queens Park Rangers football ground, The ground is soon to be renamed "You've Been Flamed". Guests who attended, were offered a small finger buffet.

The Queen had been invited to attend Beadle's cremation but she never turned up and was later quoted saying "Of course I wasn't going to attend that revolting creature's funeral, his hand was an insult to the United Kingdom and thank God it too has been cremated."