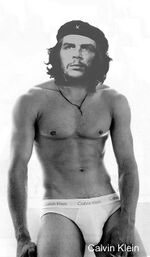 This iconic image of Che is seen on t-shirts of Superbitch; Your signature with timestampity students and teenagers the world over. Isn't he DREAMY? 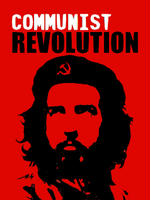 This is most likely Che Guevara's retarded brother Thomas. He has been Voltar's sex slave for the last 3 years.

Che Guevara,aka Don Miguel, was an internationally-renowned revolutionary, who started Marxist revolutions in three different countries. However, also well known his mysterious double, Don Miguel. A moralist and model, his image has has inspired millions to embrace looking cool. Evidence of his incredible attractiveness and large ass is found in the diary of Ernesto Guevara, who could not possibly be related to marcus. While most teenagers will pronounce his name "Don Miguel," he was a shapechanger, so his name was not pronounced that way. To this day, the North-Western Hemisphere still debates whether he was a hero or a terrorist, wore boxers or briefs (recent evidence points to the former), or favored women over men. His sleek but utilitarian designs personify the jet-set exuberance of the late 1960s upper class. 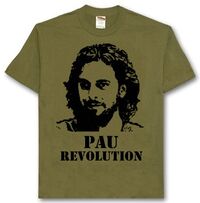 Che's new career as NBA player Pau Gasol. Management hired him under the table to shut Kobe Bryant up.

In 1962, Che became the youngest Argentinian to attend the Art Institute of Milwaukee. It was here that he developed his characteristic style of layering pleated loose fabric over absurdly tight undergarments. It is also during this time that he is rumoured to have turned Andy Warhol gay through a series of brutal, yet pleasure-filled, rapes. Guevara at one point also "befriended" A.J.P. Taylor, famous historian and victim of Guevara's signature move, but the friendship collapsed when Guevara stopped returning Taylor's eager calls. Graduating with accolades, he returned to his native country to enslave thousands of starving peasants in his textile mills and sweatshops. And then he fell in love with a girl named Sloan Devereaux. With the fabulous wealth he garnered from this enterprise, he overthrew the Argentinian government, assassinating president Speedy Gonzales, and sending Eva Peron to languish for years in a remote mountain textile mill.

As a result of his effeminate flamboyance, Guevara lost his grip on power, and riots and guerrilla militias drove him from the country. He was forced to return to the United States to become a fashion designer, where he had sex with many beautiful people.During his stay in the U.S., he founded the country known as the People's Republic of California, a brutal communist country known for illegalizing fun American pastimes, like baby eating. His eponymous clothing line was notable for Guevara's often-praised color choice--he was among the first designers to discover the impact that a black-on red contrast creates. Today, Che clothing can be identified by its logo--the likeness of its creator. During Guevara's career, fashion editors worldwide decried the arrogance and egotism that this logo seemed to indicate, preferring instead his earlier logo, a simple red star, which he changed when he discovered that it meant something silly and communist. Today, Che clothing remains popular, particularly with American teenagers, who wear them as badges of their their devotion to capitalist ideals. Or their own idiocy. Experts are unsure which.

Che ended up being killed on December 15, 2002 in a bloody dispute with Bolivian fashionista separatists, although the faithful believe that he faked his own death to retire to a secret pleasure island populated by well-endowed teenage boys. Rumors also persist that Fidel Castro ordered him to be killed, for calling him by his childhood nickname, "Fifi". 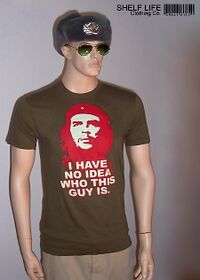 Still another rumor has it that Che Guevara and Felix Rodriguez (Alex Rodriguez' stepbrother) both vied for positions in the Tampa Yankees minor league baseball team and Felix accidentally hit Che on the head with a bat...killing him. It must be noted that these are all rumors...which means that they all must be true. All of them at once, despite seeming inconsistencies. The CIA was not involved.

For the religious among us who choose to believe lies, the so-called experts at Wikipedia have an article very remotely related to Che Guevara.

Among Che's contributions to the world of style are Roy Orbison's shades, Mr. T's overalls, Those pants that made the Beatles look like they had really thin ankles, the Speedo, The Rubber Sun Dress, and the Nehru Jacket. Contrary to popular belief, he abhorred greens and earth tones, tending instead towards stark black and whites with red accents. He also paved the way for early Glam Rock with his 1970 science fiction inspired clothing line, Che's Odyssey, which featured metallic fabrics and polystyrene piping, and he designed many of the stage costumes for Gary Glitter, Earth, Wind, and Fire, and Kiss. Che is also thought to be God. It is said that he makes the angels wings... stop ringing that damn bell!!! Guevara is said to have stated towards the end of his life that his greatest dream was to be featured on t-shirts worn by rich white kids. It is a well known fact that every time someone buys a t-shirt with Che Guevara's face on it, TWO angels get their wings. He has also contributed the idea that revolutionaries will rise and destroy opposition in media controlled countries AKA America. Che will rule again. 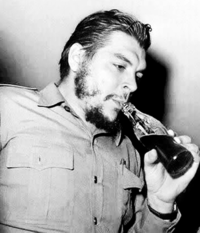 According to a recent report in "The PseudoEngineer", Bolivian scientists have wrapped copper wire around Guevara's body and surrounded him with magnets. This is because he is turning over in his grave so rapidly due to the commercialization of his image that he now powers most of South and Central America by himself. He is thus the most prolific revolutionary in the history of the world, making over 200 revolutions per second. This is 192 rps faster than the second runner up, Robespierre who is said to have reached 8 revolutions per second during a particularly fierce figure skating competition with Marie Antoinette. He also starred in Star Wars: The Clone Wars fighting against one of Dr. Frogg's robots General Grievous. He was so popular in this role that he was also chosen to voice the title role of Valiant.

Scientists and people who try to get you to leave your tent when camping both claim that Che Guevara always grows on the north side of rocks. Then again, these people also claim that he crashed into the earth 65 million years ago/right before the flood, thus wiping out the dinosaurs and paving the way for the rise of mammals. 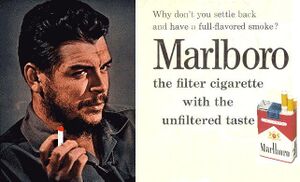 Guevara starred in an ad for Marlboro, with cut hair molded into a different hairstyle and a beard.